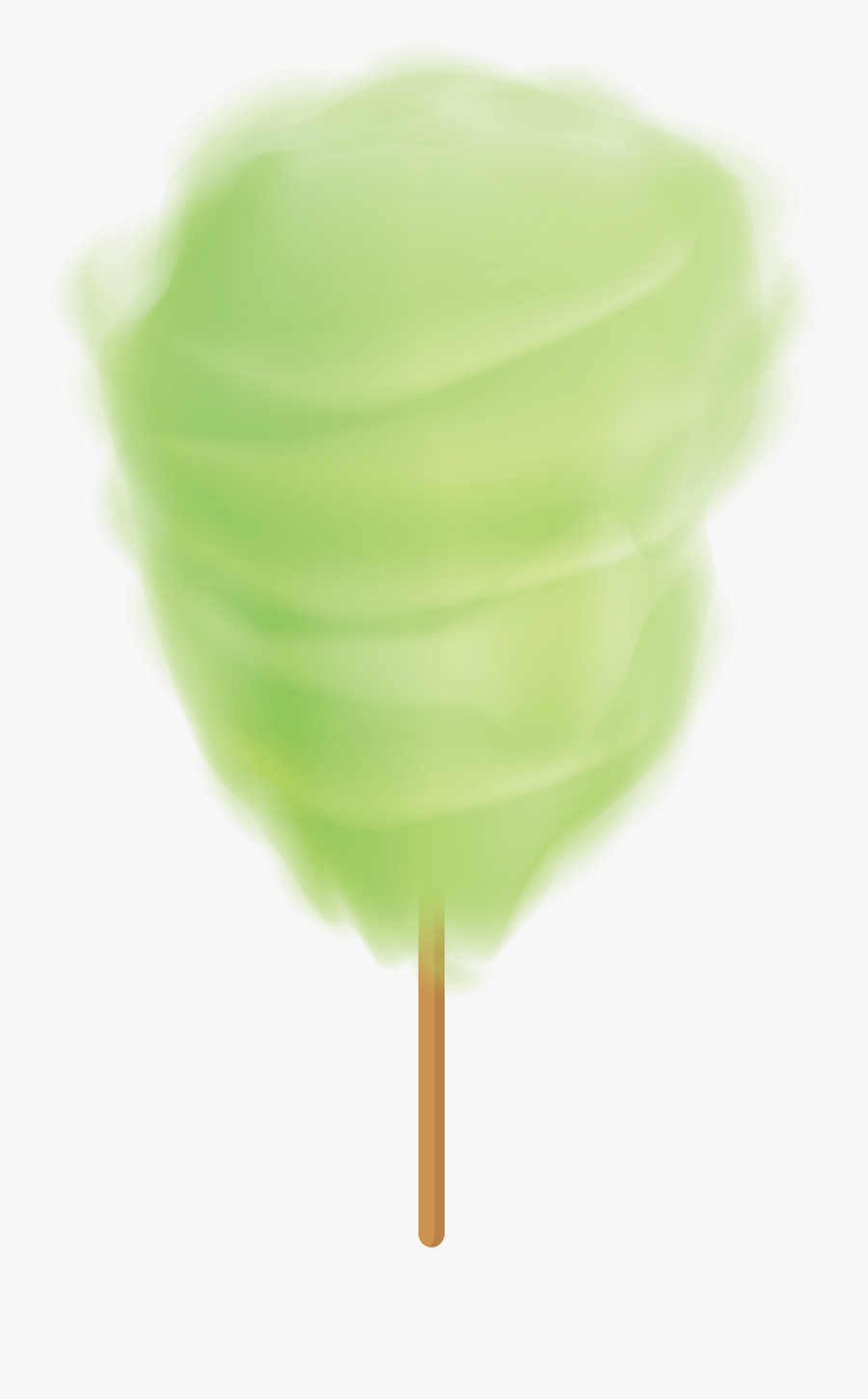 With Biden replacing the skeptical Trump presidency, we are seeing how extensive is the mass addiction to climate pseudoscience.  As children, many of us experienced cotton candy at a county fair, circus midway or amusement park.  This science is like that:  a sugar high from a fluffy, vaporous cloud lacking any calories of substance.  How strange now to see elite adults addicted to this green stuff; people like politicians, financiers, judges and captains of industry, added to children and teachers who swallowed green junk science for decades.

Richard Schulman explains in his Founders Broadsheet article The false science behind the Biden green program.  Excerpts in italics with my bolds and some added images. 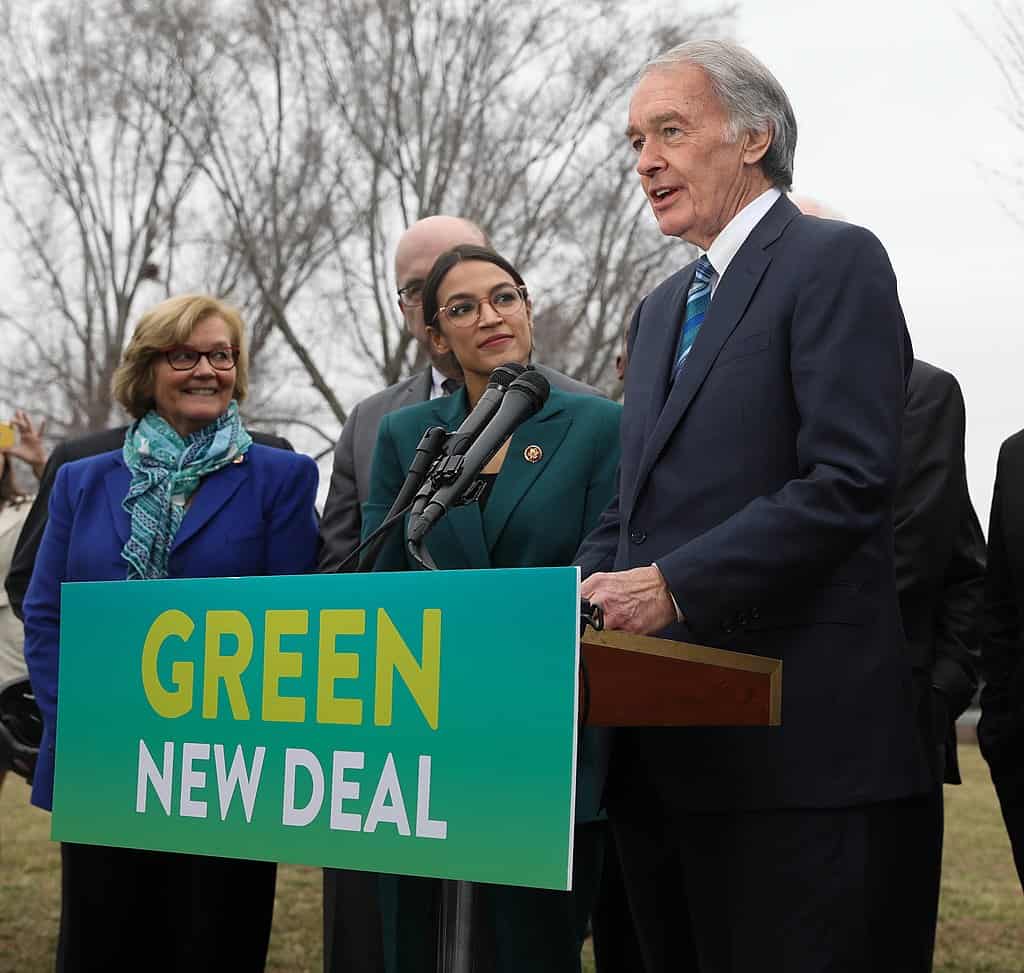 The green program behind President Biden’s post-inaugural flood of executive orders is unscientific and deficient in economic and geostrategic common sense. The major media have endeavored to conceal that truth by means of three decades of spurious climate scare stories.

The claim that humanity faces an imminent global warming catastrophe because of its use of fossil fuels is junk science.

The central lie pushed by major media and the UN’s Intergovernmental Panel on Climate Change (IPCC) is that increases in atmospheric CO2 from fossil-fuel use will keep boosting global temperatures. This supposedly will be further multiplied catastrophically by positive feedback: as oceans warm, atmospheric water vapor, another greenhouse gas, will increase. This will foster more warming, which will further warm the oceans, generating more atmospheric water vapor, and so on. The result of these alleged positive feedback mechanisms for CO2 and H2O, the narratives claim, will be that Earth ends up being a hot lifeless planet like Venus.

The feedbacks are negative

If such positive feedbacks existed, Earth already would have turned into another Venus. The reason this hasn’t happened is because negative feedback mechanisms operate for both CO2 and H2O. These the IPCC and media have studiously avoided discussing before the public:

This has been explained recently in papers by W. A. van Wijngaarden and W. Happer (“Dependence of Earth’s Thermal Radiation on Five Most Abundant Greenhouse Gases”), William Happer “Radiation Transfer,” and Howard Hayden (“CO2 and Climate: A Tutorial”).

William Happer is Professor Emeritus in Physics at Princeton University. The Happer paper, “Radiation Transfer,” was issued as one of nine “Red Team” type papers by the Executive Office of the President of the United States during the last days of the Trump administration. They were subsequently denied that White House imprimatur by Trump Science Advisor, Kelvin Droegemeier. Climate scientist Roy Spencer, another of the “Red Team” authors, believes Droegemeier did this “for political purposes and professional gain.” Droegemeier served on the National Science Board for 12 years during the George W. Bush and Obama administrations. From 2012 to 2016, he served as Obama’s Vice Chairman of the NSB. 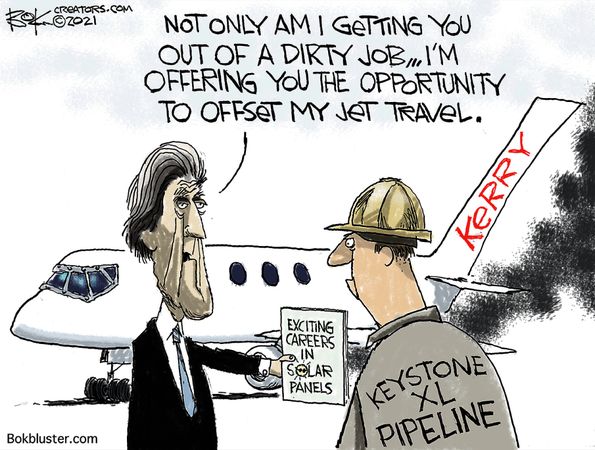 Fears of CO2 Are Overblown

Hayden writes that: “[T]he warming that would be caused by the next 400 ppmv (parts per million by volume) of CO2 would be about one-tenth as much as caused by the first 400 ppmv. Again, this is likely an overestimate.”

At the mean distance of Earth from the Sun, sunlight carries an energy flux of about 1,360 Watts per square meter (Wm-2) …. [F]or cloud-free temperate latitudes, doubling the concentration of carbon dioxide would decrease thermal radiation to space by about 3 Wm-2.

By way of comparison, Happer writes, because of the Earth’s elliptical orbit, which modestly modifies the distance between Sun and Earth during its annual orbit, “there is 91 Wm-2 change [in] flux from summer to winter.” In other words, the extra heating of Earth by a doubling of CO2 from present values would produce just 3.3% of the heat difference regularly observed on Earth between January vs. July. “Great efforts are needed to concoct a ‘scientific’ argument that 3 Wm-2 is worth worrying about,” Happer concludes, adding that

Any doubling of carbon dioxide concentrations will produce the same 3 Wm-2 decrease of flux to space whether we consider doubling the pre-industrial value of 280 parts per million (ppm) to 560 ppm, which could happen by about the year 2100 at the current rate of increase around 2 ppm/year. Doubling the current 410 ppm atmospheric concentration to 820 ppm would take about two centuries.

The reason that CO2 exhibited diminishing returns as a greenhouse gas (GHG) — even before present atmospheric levels were reached — is that to be a GHG, an atmospheric gas must prevent infrared radiation from escaping into space. CO2 does this only in a very narrow band of infrared frequencies (the 14 to 16 micrometer band). This band quickly, at much lower atmospheric levels of CO2 than at present, tends towards saturation. But meanwhile, radiation across the rest of the much larger spectrum of infrared frequencies escapes into space, thereby maintaining Earth at an equilibrium temperature.

This is one of the important negative feedback mechanisms that prevents Earth from becoming a Venus.

Why isn’t this obvious to the climate catastrophists backing the UN’s IPCC? There are two approaches to this question: one, scientific; the other sociological. The scientific rationale, if there is a respectable rationale to be made, is described by Hayden as follows:

[W]e know from satellite measurements that the temperature rise since about 1979 has been almost 0.6º C, far above that caused directly by CO2. Climate scientists are fully aware of these numbers. They know that increasing CO2 concentration—by itself—has little effect on temperature even if the amount doubles. The claim is that the warming is amplified by the increase in the H2O greenhouse effect.

If this claim is wrong, any warming beyond the little that can be attributed to increased CO2 must be of natural origin (or changes in land use, not fossil fuels).

In case you are wondering why the earth did not bootstrap itself into boiling temperatures during the Eemian Interglacial, the Holocene Climate Optimum, the Minoan Warm Period, the Roman Warm Period, the Medieval Warm Period, or thousands of other warmings, the answer is that the climate is not controlled by positive feedback—where hot weather begets even hotter weather—but by negative feedback—where, as things get hotter, they shed more heat. For the last half-billion years, this negative feedback system has kept the temperature of the surface of the earth within a few percent of its present 288 K.

Water vapor also is subject to negative feedback. Increased atmospheric levels of it condense as clouds, rain, snow, or ice. Nor does it escape the same saturation effect to which CO2 is subject. Wijngaarden and Happer write:

The cheapening of climate science programs

A compelling sociological explanation for the perspectives of the CO2 catastrophists is provided by climate scientist Judith Curry. In an interview with Christopher Balkaran of the Strong and Free podcast channel, she explains what happened to the field of climate studies between when she began to study climate at graduate school in the late seventies and early eighties and the present.

Curry: Climate change wasn’t a really big issue at that point. At the time, it was all about geophysical fluid dynamics, trying to understand the circulations of atmosphere and the ocean, radiative transfer, cloud physics. It was, it was very physics based. I would hear in the media about people talking about, Oh, the ice age is coming , or doom and gloom from CO2 emissions, but nobody was really paying attention to all that very much in terms of what I would say the mainstream field until the late 1980s, really.

[D]efenders of the IPCC started pushing the idea that anybody who doubts us or challenges us, they are in the pay of big oil. After that, it became much more difficult to really challenge all that. And certainly by the turn of the century, anybody who was questioning the hockey stick or any of these other things were slammed as deniers and ostracized. And then after Climategate in 2010, the consensus enforcers became very militant. So it’s a combination of politics, and some mediocre scientists trying to protect their careers. [T]hey saw this whole thing as a way for career advancement, and it gives them a seat at the big table and political power….

I was old school at the University of Chicago with geophysical fluid dynamics and all this really hard stuff…. There’s very few universities that have good programs in climate dynamics at this point…. Climate dynamics is still there, but it’s far from dominant…. [T]here are all these new degree programs spinning up in climate, that are far away from the geo-physical roots. These new programs combine policy with a little bit of science and economics and whatever… [T]he science part of it basically gets minimized. And that’s where all the students are running to… leaving a talent dearth of people with the good mathematical physical mindset and wanting to enter into the more challenging fields.

In conclusion, the Biden administration is basing its entire economic and geopolitical policies on bad CO2 science.

The policies are harmful to working people here and abroad. The policies abandon US fossil fuel strengths to the benefit of a hostile China, Russia, and Iran. They damage the US economy. As Sen. John Barasso (R-Wyo) pointed out in a USA Today op-ed,

A federal leasing ban would kill an estimated 62,000 jobs in New Mexico, nearly 120,000 in Texas and more than 33,000 in my home state of Wyoming next year alone, according to the American Petroleum Institute. It will also eliminate hundreds of millions of dollars in revenue that these states depend on for public schools, roads, water projects and other essential services. In response to the Keystone cancellation, TC Energy has announced 1,000 layoffs, and the potential union jobs lost could be 10 times higher.

If there’s something approximating a fair election in 2022, Democrats will pay a price for their unscientific climate policy, so contrary to the national interest, in the House of Representatives and Senate. 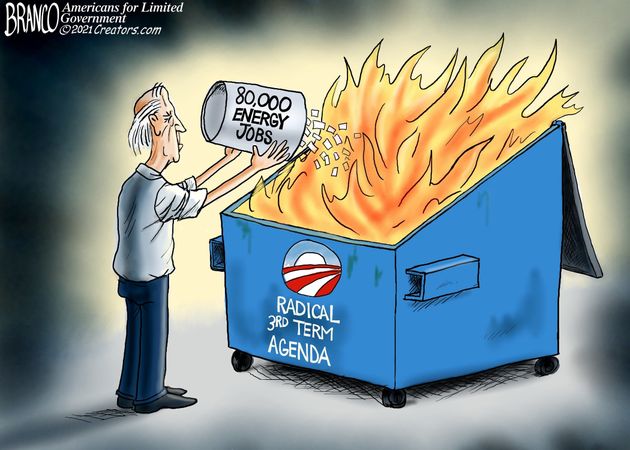