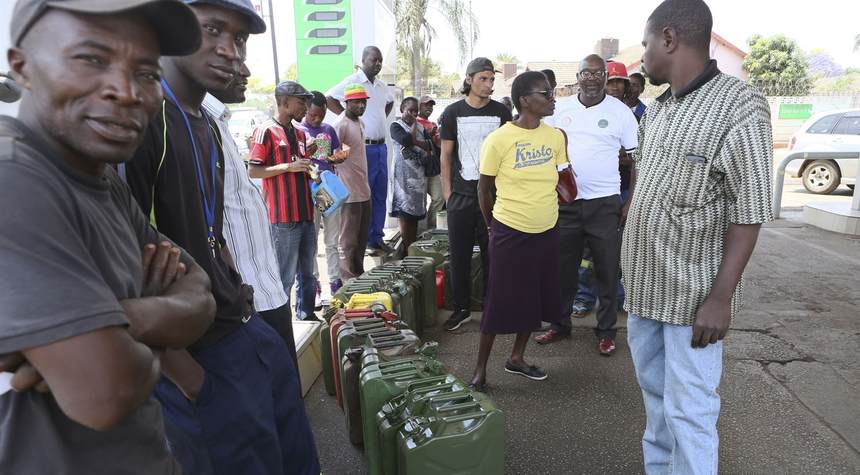 Hot Air reports An African mystery: Where did COVID go? Excerpts in italics with my bolds.

There’s something strange happening in Africa which, according to the Associated Press, has scientists “mystified.” The curious situation is particularly prevalent in Zimbabwe. It’s a nation with a population of 14.8 million people and a vaccination rate of less than 6%, a fact that the World Health Organization lectures us about endlessly. And yet in the past week, they recorded a total of 33 COVID deaths. How is this possible? The AP interviewed a number of people who were shopping in a township outside Harare, almost none of whom were wearing masks. One man declared that the virus was “gone” and asked the reporter, “when did you last hear of anyone who has died of COVID-19?” He said that he carries a mask in his pocket because the police demand bribes from people without masks or they are threatened with arrest, but he rarely puts it on. Doctors have a few theories they are tossing around, though many are simply stumped. But I bet some of us who aren’t medical professionals could make a guess.

When the coronavirus first emerged last year, health officials feared the pandemic would sweep across Africa, killing millions. Although it’s still unclear what COVID-19’s ultimate toll will be, that catastrophic scenario has yet to materialize in Zimbabwe or much of the continent.

But there is something “mysterious” going on in Africa that is puzzling scientists, said Wafaa El-Sadr, chair of global health at Columbia University. “Africa doesn’t have the vaccines and the resources to fight COVID-19 that they have in Europe and the U.S., but somehow they seem to be doing better,” she said.

As already noted, one of the most stunning statistics in that story is that the vaccination rate in Zimbabwe is only 6%. If you found a single county in the United States with a 6% vaccination rate, Joe Biden would probably already have ordered everyone to be shipped off to prisons. If it happened in Australia they would likely have started executing people by now. But in Africa, it’s just a fact of life.

Reading through the commentary provided to the AP by various medical experts, there seem to be three general theories being suggested to explain the absence of a COVID catastrophe in most of Africa except for the nation of South Africa where they have a significantly higher caseload. The first theory is that the COVID epidemic is just as bad as everywhere else but we simply don’t collect enough data to realize it. The second theory is that scientists should be studying the African people to see if they are somehow more naturally resistant to the novel coronavirus. The final theory is that the average age of people in Zimbabwe (for example) is roughly 20 because life expectancies are much lower. Younger people are less likely to die from the disease.

Let’s consider all of these ideas from the layman’s point of view. Is it possible that there are a lot more cases of COVID in Africa than are being reported? Of course. That only makes sense because most areas in countries like Zimbabwe simply don’t have the resources to be testing everyone. In many cases, the only people being tested are the ones who show up at a medical center displaying symptoms. But one thing they are fully able to record is the number of people who are dying. If deaths of all sorts aren’t rising significantly, then not that many people are dying from COVID.

The idea that Africans are somehow naturally more immune to the virus sounds a bit wacky, at least at first glance. In the United States we have plenty of African-Americans who should be essentially drawing from the same gene pool, right? And yet COVID rates in those communities (where vaccine hesitancy remains higher than the national average) have been quite high during surges in the pandemic. Something doesn’t add up here.

And then there’s the idea that a population with a much lower average age won’t produce as many deaths. While that should statistically be accurate, I would suggest that we can expand on that theory. Residents of Zimbabwe have lower life expectancies so their average age is considerably lower. That much is true. And their vaccination rate is in single digits. Now let’s combine those facts with the reality that almost nobody is being tested for the virus and add in the fact that the COVID survival rate for younger and otherwise healthy people is well over 99%.

Putting all of that together, isn’t it just possible that most of the people in Zimbabwe have already had COVID, developed their own antibodies, and just gotten on with their lives?

Dare we use the forbidden words that the American media refuses to speak and suggest that just maybe the people of Zimbabwe have developed herd immunity? We know the virus exists in the country because a few people died of it last week. We also know how contagious it is. Doesn’t it just make sense that COVID swept through the country and there are no large pockets of people who have never been exposed, so the damned virus is simply dying out on its own?

I’m sure I’ll be locked up in the COVID “misinformation” jail for suggesting this, and I will once again repeat the disclaimer that I have no formal medical training. But it’s something to think about. Perhaps the situation in Zimbabwe really isn’t all the much of a “mystery” after all. Maybe… just maybe… all we’re seeing is mother nature taking her natural course. The human body contains all sorts of marvels and surprises from time to time. We just recently learned of the second person confirmed to have completely recovered from HIV without any medical treatment. It makes me wonder how many other people have contracted HIV but were never tested for it and went on to fight it off on their own. When was the last time anyone tested you for HIV? I haven’t had a test since right before I was married, nearly 30 years ago. Just some food for thought for you on a Friday.

Property mogul Ken Sharpe last Friday donated US$50 000 to government for the purchase of Ivermectin, which he said saved both his life and that of his wife after they contracted the Covid-19 virus.

The donation, which was made during an event held at the State House headed up by President Emerson Mnangagwa, was Sharpe’s way of giving back after missing death by a whisker.

Sharpe who is the chairperson for West Property said he would not have made it if he had not taken Ivermectin after contracting the virus .

It is included in WHO essential medicines list for several parasitic diseases and is used in the treatment of onchocerciasis (river blindness), strongyloidiasis and other diseases caused by soil transmitted helminthiasis.

“It is a fact that I had been vaccinated and I believe, as you can see, I am a strong man in good health of just under 50 years of age. However, even having observed all the Covid-19 protocols of social distancing, without the assistance of the medicine that I took … I would not be standing here today,” he said .

He shared how he battled with the most severe symptoms until he started taking Ivermectin to which he owes his life.

Sharpe, however, said it was hugely unfair that currently the life-saving drug was pegged at a high price and yet a bit of research had proved that it could be sourced for a few cents.

This he said, would expand and widen access to many people who were currently failing to buy at the current prices.