Science, Public Health Policy, and the Law paper Spontaneous Abortions and Policies on COVID-19 mRNA Vaccine Use During Pregnancy.  Excerpts in italics with my bolds.

The use of mRNA vaccines in pregnancy is now generally considered safe for protection against COVID-19 in countries such as New Zealand, USA, and Australia. However, the influential CDC- sponsored article by Shimabukuro et al. (2021) used to support this idea, on closer inspection, provides little assurance, particularly for those exposed in early pregnancy. The study presents falsely reassuring statistics related to the risk of spontaneous abortion in early pregnancy, since the majority of women in the calculation were exposed to the mRNA product after the outcome period was defined (20 weeks’ gestation).

In this article, we draw attention to these errors and recalculate the risk of this outcome based on the cohort that was exposed to the vaccine before 20 weeks’ gestation. Our re-analysis indicates a cumulative incidence of spontaneous abortion 7 to 8 times higher than the original authors’ results (p < 0.001) and the typical average for pregnancy loss during this time period. In light of these findings, key policy decisions have been made using unreliable and questionable data. We conclude that the claims made using these data on the safety of exposure of women in early pregnancy to mRNA-based vaccines to prevent COVID-19 are unwarranted and recommend that those policy decisions be revisited.

We question the conclusions of the Shimabukuro et al.[4] study to support the use of the mRNA vaccine in early pregnancy, which has now been hastily incorporated into many international guidelines for vaccine use, including in New Zealand.[1] The assumption that exposure in the third trimester cohort is representative of the effect of exposure throughout pregnancy is questionable and ignores past experience with drugs such as thalidomide.[38] Evidence of safety of the product when used in the first and second trimesters cannot be established until these cohorts have been followed to at least the perinatal period or long-term safety determined for any of the babies born to mothers inoculated during pregnancy.

Additionally, the product’s manufacturer, Pfizer, contradicts these assurances, stating: “available data on Comirnaty administered to pregnant women are insufficient to inform vaccine- associated risks in pregnancy”, and “it is not known whether Comirnaty is excreted in human milk” as “data are not available to assess the effects of Comirnaty on the breastfed infant” (page 14).[39]

Pfizer, it was noted, says on its vaccine’s label that the available data on the vaccine “administered to pregnant women are insufficient to inform vaccine-associated risks in pregnancy.”

It would be great if there was a central source for factual information that isn’t tainted by political opinions and government agencies or elected leaders, including those who benefit from financial contributions made to them by big pharma that stands to make billions on the production and sale of their COVID vaccines. No wonder Americans no longer trust our government or the DNC’s corporate media. 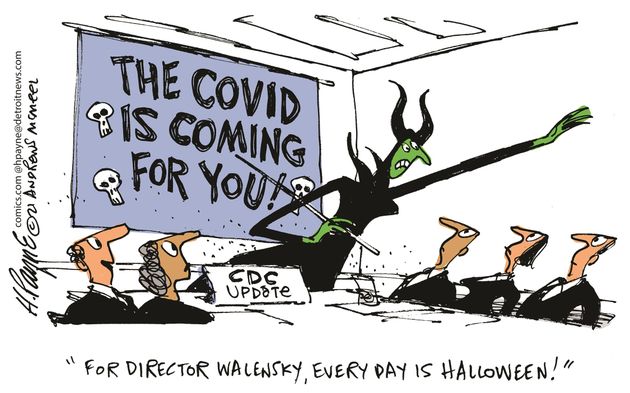