Paul Hunter, Professor of Medicine, University of East Anglia explains at The Conversation COVID-19 vaccines are probably less effective at preventing transmission than symptoms – here’s why.  Excerpts in italics with my bolds.

Countries where COVID-19 vaccines have rolled out quickly, such as Israel and the UK, are starting to give an indication of how well they work. Their early results suggest the vaccines are highly effective at preventing people from being hospitalised or dying from the disease.

However, it’s less clear how good the vaccines are at stopping people from spreading the virus. But given what we know about how they work, we shouldn’t be surprised if they are less effective at stopping people transmit the virus than preventing them becoming ill. This is because the type of immunity they generate is likely to be better at fighting off severe rather than mild infections.

How immunity is created

There are a number of distinct phases in the course of a coronavirus infection. Usually the virus starts with what’s known as a “mucosal infection” because it infects the lining of the nose and throat, the nasopharyngeal mucosa.

This is the asymptomatic or pre-symptomatic phase. Mild symptoms such as cough or altered taste or smell may then develop. However, in a proportion of people, the infection then spreads down the respiratory tract to the lungs, causing more serious problems. Some may develop very severe illness, leading to respiratory and other organ failure. At this point, with the virus moving around the body and causing problems in multiple areas, the infection is “systemic”.

People are most infectious during the early stages of infection, when the virus is largely restricted to the nasopharyngeal mucosa. Indeed, it’s possible for people to be highly infectious without the virus spreading to other parts of the body or causing severe illness.

A systemic immune response, which works across large swathes of the body, is associated with creating one type of antibody, IgG. Immunity generated in the mucosa (also called secretory immunity) is associated with creating another, IgA. As a result, immunisations that focus on generating systemic immunity – which is what injected vaccines do – rarely induce mucosal immunity. This likely applies to all the COVID-19 vaccines currently available.

And yet, the nasopharyngeal mucosa is ground zero for most coronavirus infections. So while COVID-19 vaccines may generate a response that’s highly protective against systemic disease in the lungs and other organs, the vaccines are less likely to generate strong mucosal immunity that’s effective against the mild but infectious early stage of infection in the nose and throat. We should therefore expect some difference in the vaccines’ effects on preventing severe disease and blocking infection and transmission.

We don’t yet know if there’s a difference in the development of systemic and mucosal immunity for COVID-19. Emerging evidence suggests there might be, but it isn’t conclusive, and much of this research still needs to be fully reviewed.

Finally, it’s worth remembering that even if these vaccines don’t end up blocking infections to a high degree, that doesn’t mean they won’t make a major contribution to suppressing viral spread. Even if people still get infected, COVID-19 vaccines are likely to reduce the amount of virus generated during an infection, lowering what can be passed on. 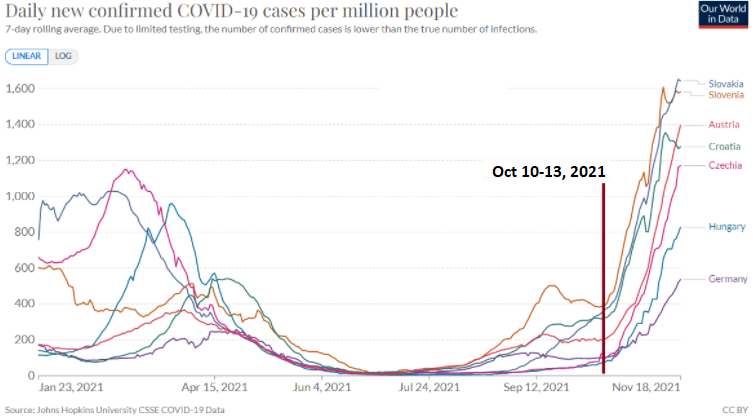 What happened in Central Europe on Oct 10-13 so that many people started to become ill?

Nothing significant happened on Oct 10-13. But the nights turned cool and heating was needed everywhere overnight from Oct 9.  Along with the temperature drop, absolute humidity of the air also dropped. It dropped almost by half within a couple of days, it dropped to the level where it had not been since the spring.

The air arriving to the lungs should contain 35 g/kg of water. In summer, the air contained about 10 g/kg and the epithelium had to add 25 g/kg. From October 9 on, 20% more water was needed from the epithelium overnight

20% increase in any burden is tough even for a short period. Replace a 75 g racquet by a 90 g one and ask a good badminton player to play his standard play. He will need a rest very soon or be broken. Epithelium would also need a rest but it can’t. Mucus covering the upper respiratory epithelium is responsible for moisturizing the inhaled air, acting as a barrier between the environment and the epithelial cells. The mucosal microbiome also turns the inhaled viral particles harmless.

When absolute humidity drops, the water supply to the epithelium should be increased but do we know how fast such change can take place? And is there a limit to the water supply? How many have no idea of the importance of mucosal hydration of the air at all? In the winter 2020/21, Estonia had two major drops of absolute humidity. From average 8 g/kg to average 5 g/kg on Oct 14-20, triggering the rapid increase in infection. Average humidity then gradually decreased to average 4 g/kg by December, population acclimatized…

The waves of COVID-19 have broken when the absolute humidity has increased and not dropped back below customization level for a while. It happened so in the spring 2020, in the spring 2021, and also in the autumn 2021 in all Baltic countries simultaneously.

People in moderate climate have been suffering from infectious diseases from every autumn till spring and the epidemiological pattern is very similar each year. Diseases start with the beginning of the school and peaks in the second half of each winter. Since the emergence of centralized heating, the problem of indoor humidity has only become worse. Modern HVAC systems are aimed at supplying fresh air at low energy cost but these systems are still failing to address indoor humidity and maintain its healthy level.

It has been long known that the incidence of viral diseases is higher in very dry and very wet air, i.e. in nordic winter with and in tropical heat, both causing body to dehydrate. (Fig from Tamerius, Shaman et al. 2013) 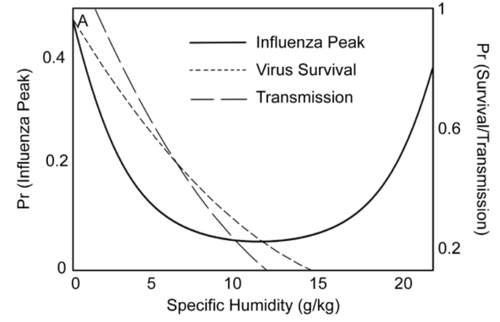 1. The superiority of natural immunity to vaccine-induced immunity is not mentioned.  Dr. Robert Clancy explains:

Another issue is the recognition that genetic vaccines have limited value. While doctors support the current vaccine roll-out, reported “danger signals” must be clarified. Both the DNA-vector vaccine (AstraZeneca) and mRNA vaccines (Pfizer and Moderna) behave as predicted by biology relevant to airways’ protection (something not understood by the vast majority of “experts”): short duration of protection limited to control of systemic inflammation, with little impact on infection of the airways.

It has been reported that ACE2 is the main host cell receptor of 2019-nCoV and plays a crucial role in the entry of virus into the cell to cause the final infection. To investigate the potential route of 2019-nCov infection on the mucosa of oral cavity, bulk RNA-seq profiles from two public databases including The Cancer Genome Atlas (TCGA) and Functional Annotation of The Mammalian Genome Cap Analysis of Gene Expression (FANTOM5 CAGE) dataset were collected. RNA-seq profiling data of 13 organ types with para-carcinoma normal tissues from TCGA and 14 organ types with normal tissues from FANTOM5 CAGE were analyzed in order to explore and validate the expression of ACE2 on the mucosa of oral cavity. Further, single-cell transcriptomes from an independent data generated in-house were used to identify and confirm the ACE2-expressing cell composition and proportion in oral cavity. The results demonstrated that the ACE2 expressed on the mucosa of oral cavity. Interestingly, this receptor was highly enriched in epithelial cells of tongue. Preliminarily, those findings have explained the basic mechanism that the oral cavity is a potentially high risk for 2019-nCoV infectious susceptibility and provided a piece of evidence for the future prevention strategy in dental clinical practice as well as daily life.

Fig. 1 A schematic of the key cellular and biomolecular interactions between Ivermectin, host cell, and SARS-CoV-2 in COVID19 pathogenesis and prevention of complications.

Ivermectin also had the highest binding affinity for TMPRSS2. By binding so well to all three — the spike, the ACE2 receptor and the TMPRSS2 secateurs that prune or prime the spike, ivermectin makes it much harder for the virus to get inside a cell.

See How Much Does Ivermectin Fight Covid19? The Count is 20 ways.