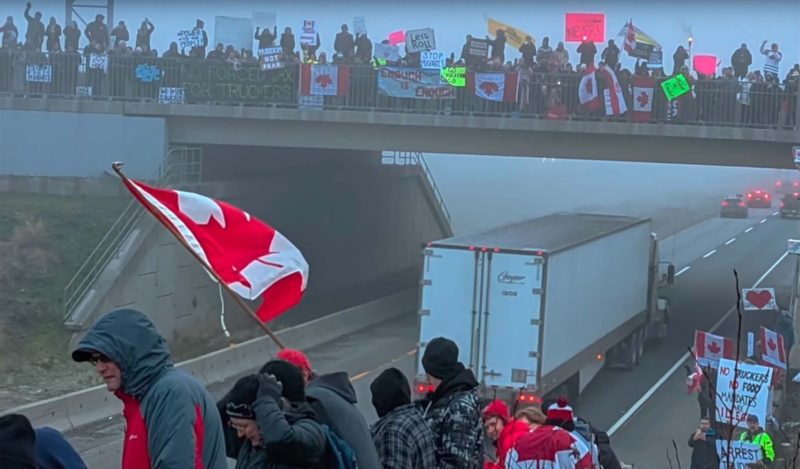 An insightful essay into this movement comes from Jeffrey Tucker at Brownstone Institute Justin Trudeau Ducks the Great Trucker Revolt.  Excerpts in italics with my bolds.

The resistance reveals itself always in unexpected ways. As I type, thousands of truckers (numbers are in flux and are in dispute) are part of a 50-mile-long convoy in Canada, headed to the capital city of Ottawa in protest against an egregious vaccine mandate imposed by Prime Minister Justin Trudeau.

They will be joined upon arrival by vast numbers of protestors who are defying the restrictions, closures, and mandates of the last nearly two years.

The triple-vaccinated Trudeau, meanwhile, has decided that he has to go into deep hiding because he was exposed to Covid. A clean, ruling-class, fit, and fashionable lefty like him cannot be expected to face such a pathogen directly. As a member of the vanguard of the lockdown elite, he must never take risks (however small) and must keep himself safe. It is merely a matter of coincidence that he will be locked away in hiding as the truckers arrive together with hundreds of thousands of citizens who are fed up with being treated like lab rats.

Previously, Trudeau had said nearly two years ago that the truckers were heroes. On March 31, 2020, he tweeted: “While many of us are working from home, there are others who aren’t able to do that – like the truck drivers who are .working day and night to make sure our shelves are stocked So when you can, please #ThankATrucker for everything they’re doing and help them however you can.”

It’s true. Like many “essential workers” in the US, these truckers bravely faced the virus and many already gained natural immunity, which Canadian law does not recognize. Trudeau decided that they needed to be forced to get the vaccine anyway. Keep in mind: these are the people who get food to the stores, packages to homes, and all products that keep life moving. If they don’t drive, the people don’t eat. It’s that simple. Now Trudeau must deal with #truckerconvoy2020.

Few events in modern times have revealed the vast chasm that exists between the ruled and rulers, especially as it pertains to class. For nearly two years, the professional class has experienced a completely different reality than the working class. In the US, this only began to change once the highly vaccinated Zoom class got Covid anyway. Only then did we start seeing articles about how there is no shame in getting sick. It appears that in many countries, the working class that was forced into early confrontation with the virus are saying that they aren’t going to take it anymore (and many are playing that song to make the point).

It’s a massive workers’ strike but not the kind of communist dreams. This is a “working class” movement that stands squarely for freedom against all the impositions of the last two years, which were imposed by an overclass with almost no consultation from legislatures. Canada has had some of the worst, much to the shock of its citizens.

The convoy is an enormous show of power concerning who really keeps the country running.

The convoy is being joined by truckers from all over the US too, rising up in solidarity. This is easily the most meaningful and impactful protest to emerge in North America. It is being joined by as many as half a million Canadian citizens, who overwhelmingly support this protest, as one can observe from the cheers on the highway along the way. Indeed, it’s likely to break the record for the largest trucker convoy in history, as well as the most loved.

Trudeau, meanwhile, has dismissed the whole thing as a “small fringe” of extremists and says it means nothing to him and will change nothing. This is because, he says, these truckers hold “unacceptable views.”

This is setting up to be one of the most significant clashes in the world in the great battle between freedom and those governments have set out to crush it.

Meanwhile, I’m looking now for information on this in the mainstream media. It is almost nonexistent outside social media. Fox is covering some of it but that’s about it. The Epoch Times is a wonderful exception, as we’ve come to expect in recent months. It’s not being covered in any depth in Canadian papers and TV. All the usual subjects in the US have completely ignored this mighty movement.

It’s almost like these venues have created an alternate version of reality, one that denies the astonishing reality that anyone can see outside the window.

Yes, I know that we have all come to expect that the corporate media will not cover what actually matters, and much of what it does cover it does only with a strong bias toward narratives crafted by ruling elites. Even so, it seems to stretch credulity beyond any plausible extent for the major media to pretend that this isn’t happening. It is and it has massive implications for the present and the future.

This is not really or just about vaccine mandates. It’s about what they represent: government taking possession of our lives. If they can force you to get an injection in your arm over which you have doubts, all bets for freedom are off. There must be evidence that you complied. The phone app is next, which gets tied to your bank account and your job and your access to communications and your ability to pay your rent or mortgage. It means eventually 100% government control over the whole of life.

The technology already exists. Everything going on now with these passports is driving to this point.

This is why the truckers are striking this way. It is an act of bravery but also of desperation. Once the tyranny of health passports arrives, there will be no escape. The window of opportunity to do something about this will have closed. So this is the moment. There might not be another one. Something needs to be done to fight for human rights and freedom, and put in place systems that make lockdowns and mandates impossible in the future.

This is the largest and latest example of the revolt and one that could make the biggest difference yet. But it is only one sign among many that the ruling elites in most countries have overplayed their hand. They have arrogantly imposed their plans for everyone else based on the opinions of only a few and without real consultation with experts with differences of opinion or with the people whose lives have been profoundly affected by the pandemic response.

In the US the revolt is taking many forms. There was the rally in DC this past weekend. It was impressive. Also the latest polls on political alliances show that the Democrats have lost a major part of their base. Virginia right now points to where this is headed. The party lost vast amounts of its political power in elections last year and now Republicans rule the state with great popularity.

Meanwhile, I’m looking at Biden’s latest poll numbers. I almost cannot believe my eyes. We are talking about an overall 14-point split between approve and disapprove. If this is an indication of what happens to the pro-lockdown political elite, it stands to reason that Trudeau should be worried.

In the Vietnam War, many Americans fled the draft by going to the safe haven on the northern border. That’s one way that Canada had earned its long reputation for being delightfully normal, peaceful, and mercifully boring. Pandemic policies in Canada changed that, with some of the longest-lasting stringencies in the world.

No one asked the workers. Now they are rising up. Nor does it matter that 90% of the Canadian public is vaccinated. Possessing that status alone does not mean that people no longer feel resentment for being forced to accept what they do not believe they needed and did not want in the first place. The vaccinated do not automatically give up their longing to be free and to have their human rights recognized.

The resistance to tyranny in our times is taking many unexpected forms. There will be many confrontations on the way, and there is still a very long way to go. At some point, and no one knows when or how, something has to give. 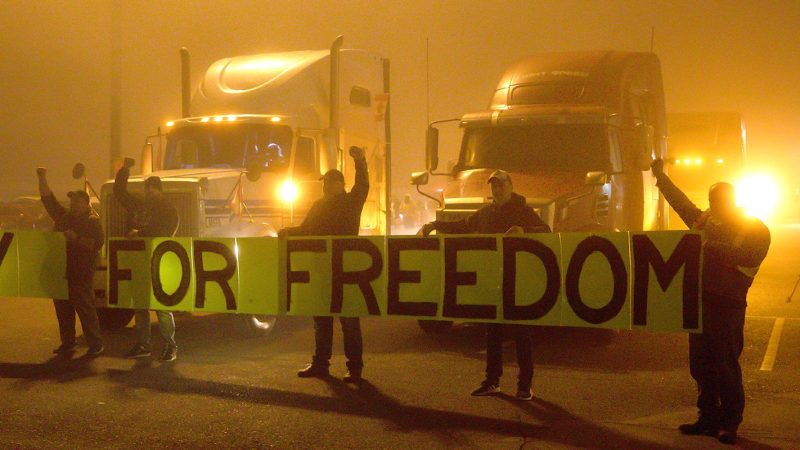