Let’s review the story about US inflation fed to PC media by Biden and the Dems: 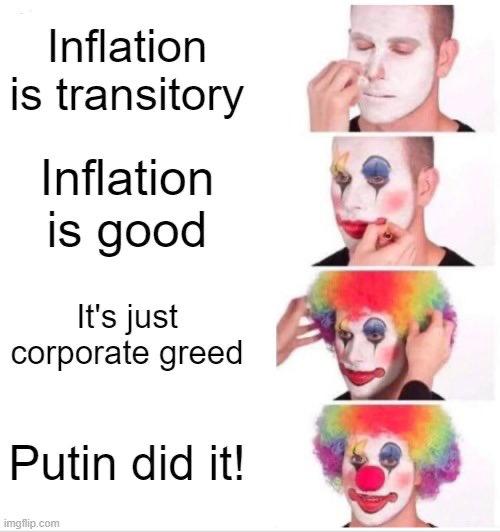 The graph above shows that consumer prices were descending from a peak in 2018 during the last two years of Trump administration.  Prices start rising upon Biden’s taking office and the spike continues prior to Putin’s Ukraine invasion (the period in pale blue titled: “Not Putin.”

Biden also blamed oil companies and their executives because they “don’t want to pump more oil, although they have every capacity to do so. Nothing is slowing them up,” he said in response to criticism that his administration’s canceling of the KeystoneXL pipeline and Executive Order stopping new oilfield leases is to blame. The administration has repeatedly said that the industry has 9,000 approved leases they can tap into at any time.

And to throw more money on the inflationary bonfire, Dems have just passed a 1.5 trillion dollar budget full of outrageous pork.

For years, Congress has dispensed with the pretense of informed legislative process when it comes to major bills and appropriations.

The new $1.5 trillion omnibus spending bill, however, took the notion of blind legislating to a disgraceful degree. Democratic leadership dumped the almost 3,000 page bill on the members (and the public) on Wednesday with only a couple days to review the massive spending.

That includes over 4,000 pork projects in earmarks.

While Congress disavowed earmarks, the pork-ridden bill shows that both parties have abandoned the pledge. Spending trillions in the last couple years appears to have removed any sense of fiscal responsibility or accountability. We are now over $30 trillion in debt so what are a few pork items — or in Schumer’s case 142 such items. (Some argue that debt is really only $22 trillion and that debt does not matter).

It was a clever move at a perfect time. With Ukraine raging and people traumatized over the war, leadership like Speaker Nancy Pelosi (D., Cal.) kept bringing questions back to $14 billion in aid for Ukraine. Members stressed that there was no time to waste — or in this case to read — before voting.

It is a familiar tactic on pork spending. You can hide an entire drove of pigs behind a single redeeming budget item.

What is most alarming is the level of duplicity. The bill was withheld by leadership to guarantee little time for the members, let alone the public, from seriously considering the specific expenditures. It shows utter contempt for the concept of public deliberation and debate in the legislation. One must accept the word of the leadership and vote in the blind.

In the meantime, even before this package, the Committee for a Responsible Federal Budget predicted that the debt-to-GDP ratio is at 101% and the total federal debt, including intragovernmental debt, may exceed 120%. Even if debt does not matter (as some have claimed) most citizens oppose pork barrel spending.

All of that is worth discussing but it is hard to have that debate when congressional leaders are dumping massive bills and calling for quick votes on little more than the cover page.

It appears that they know their days in power are numbered, and they are determined to bankrupt the country before the electorate can give them the boot.  Once again Biden is bluffing with Other Peoples’ Money.