David Robertson writes at Stat News How we got herd immunity wrong.  Excerpts in italics with my bolds and added images.

Herd immunity was always our greatest asset for protecting vulnerable people,
but public health failed to use it wisely.

In March 2020, not long after Covid-19 was declared a global public health emergency, prominent experts predicted that the pandemic would eventually end via herd immunity. Infectious disease epidemiologist Michael Osterholm, who advised President Biden, opined in the Washington Post that even without a vaccine, SARS-CoV-2, the virus that causes Covid-19, would eventually “burn itself out as the spread of infection comes to confer a form of herd immunity.” The best strategy, he reasoned, was to “gradually build up immunity” by letting “those at low risk for serious disease continue to work” while higher-risk people sheltered and scientists developed treatments and, hopefully, vaccines.

Experts in the United Kingdom also spoke early on of herd immunity acquired through infection as a protective force that would ultimately end the epidemic. Planning on SARS-CoV-2 eventually becoming endemic, epidemiologist Graham Medley suggested that the U.K.’s initial strategy should be to “manage this acquisition of herd immunity and minimise the exposure of people who are vulnerable.” The U.K.’s chief scientific adviser, Patrick Vallance, explained that the goal was to flatten the curve and “build up some kind of herd immunity” in order to “protect those who are most vulnerable to it.”

Soon after this, some came to interpret the term as a do-nothing, “let it rip” strategy that would result in a huge number of avoidable deaths.

In response, policy quickly shifted to efforts to prevent all infections rather than targeting interventions at those at highest risk while accepting that a certain degree of viral transmission was unavoidable. Herd immunity in the absence of a vaccine soon became a dirty word. By May of 2020, a leading official in the World Health Organization announced that “humans are not herds” and that the term can lead to a “very brutal arithmetic.” 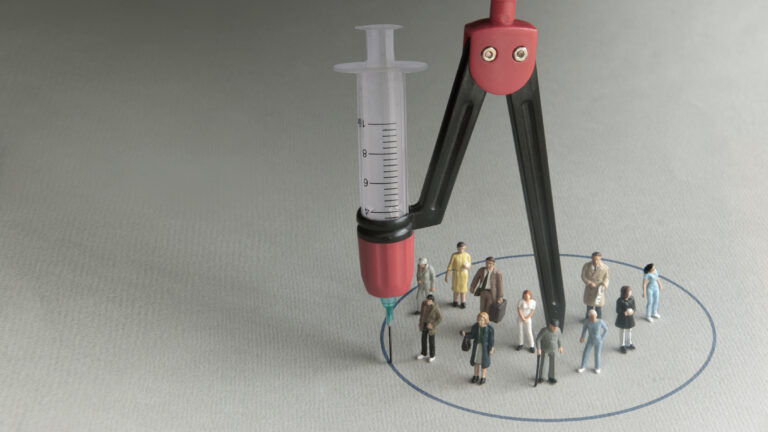 With the early arrival of vaccines in late 2020, prominent experts began promising that infection with SARS-CoV-2 was no longer inevitable. Herd immunity became defined as a percentage of immune individuals in a population that would stop transmission. Anthony Fauci captured this sentiment in May 2021 as a guest on “Face the Nation,” when he suggested that fully vaccinated individuals “become a dead end to the virus.” Once populations reached “the threshold of herd immunity,” he reiterated a month later, they would “see the infections almost disappear.”

Those mantras became the new plan: Get vaccinated to protect yourself, but also to protect those around you. Get to vaccine-induced herd immunity and the virus will virtually disappear from our communities.

As these failed to materialize, herd immunity has once again been dismissed as unachievable for Covid-19. As Fauci recently put it, SARS-CoV-2 will “find just about everybody.”

The idea that vaccinating a certain percentage of the population would stop transmission of SARS-CoV-2 was a seductive but unhelpful description of herd immunity. This understanding comes from the so-called sterilizing immunity provided by infection or vaccination against diseases like measles. Sterilizing immunity means an individual can no longer be infected or infect others. Reach a certain percentage or “threshold” of this immunity in a population (around 95% for measles) and transmission comes to halt and the virus is eliminated.

This, however, is neither the exclusive nor even the most common understanding of herd immunity — and it is misleading for Covid-19.

SARS-CoV-2 is not like the measles virus, but more like influenza, a virus that does not produce sterilizing immunity, returning every season like clockwork. Yet scientists do speak of herd immunity against the flu, even in the absence of vaccination. As Danish epidemiologist Lone Simonsen explained in September 2020: “every [flu] pandemic we’ve ever looked at ended by herd immunity.”

Long before herd immunity came to be seen as an elimination threshold guiding mass vaccination campaigns, it explained why epidemics subside, reducing — but not eliminating — an individual’s risk of infection. Much like gravity pulls an object back to earth, herd immunity is the counterweight to sustained epidemic growth.

For SARS-CoV-2, herd immunity should not have been seen as an elimination threshold.

Instead, it should have helped us understand that as immunity accumulated in the population, whether from infection or vaccination, the epidemic would recede before everyone was infected. Acknowledging that we couldn’t stop all infections, policy should have focused on minimizing the exposure of those already known to be at enormously increased risk of severe disease, while also limiting the harms caused by prolonged restrictions.

In contrast to the notion of an elimination threshold, which arose relatively recently, herd immunity has been understood as a mechanism of epidemic abatement for nearly a century. In the aftermath of the 1918 flu pandemic, British epidemiologists recreated epidemics in caged mice populations as part of efforts to understand how the shifting ratio of susceptible and immune individuals fueled or restrained epidemics. They hypothesized that epidemic waves “fall because the average resistance of the herd is raised.” But this did not mean that a pathogen disappeared. “Another wave will follow it at a later date,” they continued, when waning immunity causes “the average herd immunity to fall below some critical level.” Herd immunity denoted a turning point in an epidemic that happened before every individual in a population had been exposed, offering the appealing possibility of preventing the infection of those at most risk of severe disease.

In October of 2020, the possibility of herd immunity without vaccines reentered public discussions following publication of the Great Barrington Declaration. In line with a long-established understanding of the concept, that document defined herd immunity as “the point at which the rate of new infections is stable” and stressed that as “immunity builds in the population, the risk of infection to all — including the vulnerable — falls.”

Like prominent experts at the beginning of the pandemic, the epidemiologists who wrote the declaration stressed the importance of protecting vulnerable people while herd immunity accrued among those at lower risk. They called for a strategy of “focused protection” of those at highest risk. Writing before the arrival of vaccines, they suggested increasing testing in care homes, minimizing the rotation of staff between such facilities and, where possible, using staff with acquired immunity. Elsewhere, they proposed that Social Security payments could facilitate paid leave to high-risk individuals in the community unable to work from home. There were further suggestions for focusing protection on specific risk groups, such as those living in intergenerational households.

Rather than engaging with the substance of these proposals,
major public health figures dismissed the declaration.

Fauci called it “ridiculous” and “total nonsense.” It was later revealed that he and Francis Collins, then the director of the National Institutes of Health, privately discussed launching a “quick and devastating published take down” of the declaration. WHO Director-General Tedros Adhanom Ghebreyesus labeled it “unethical.” The WHO even changed its online definition of herd immunity, temporarily erasing reference to immunity from infection. A letter signed by many prominent scientists published in The Lancet declared: “Any pandemic management strategy relying upon immunity from natural infections for Covid-19 is flawed.”

One unfortunate result of this period in the pandemic was that herd immunity became widely understood as exclusively referring to an elimination threshold achieved through vaccination. Short of that goal it became seen as dangerously inappropriate. Two weeks after the Great Barrington Declaration was published, Nature reported on “the false promise of herd immunity” for Covid-19. One virologist wrote that “herd immunity has never been achieved through naturally acquired infections.”

Drawing on the concept as it pertains to pathogens against which we have sterilizing immunity, such statements were misleading.

When experts — and the public — began to realize that neither previous infection nor vaccination produces lasting immunity against infection with SARS-CoV-2, many became pessimistic about the very possibility of herd immunity and the term once again became seen as irrelevant to Covid-19.

In the days before anyone knew how long it would take to develop effective vaccines, herd immunity could have helped us think strategically about targeting protections at those most at risk while reducing the considerable harms caused by restrictions intended to suppress transmission, such as school closures. This was essentially what Sweden did and, though mistakes were also made there, it navigated the pandemic with its children attending school in person and with substantially lower per-capita mortality from both Covid-19 and all causes than the European Union, the U.K., and the U.S.

“It’s not possible to stop everybody getting it,” Vallance cautioned the U.K. in mid-March 2020. As countries from Iceland to Australia are recognizing, he was correct. Yet in all of the confusion and false promises of elimination that followed his warning, public health strategies lost sight of how to leverage our herd immunity to protect vulnerable people, with or without a vaccine.