This is an update adding to a previous post reprinted below Ruckus Over Classroom Genderism.  C. Bradley Thompson provides a detailed and disturbing accounting of the gender transition  movement operating inside the US school system. His substack article is Sex and the Schools, or, An Essay You Don’t Want to Read.  A few excerpts are in italics with my bolds.

In this new series of essays, I’d like to show you what is being taught in America’s twenty-first-century government schools and the philosophy behind it. The portrait that I will present here is not a pretty one, but it is the reality. The simple truth of the matter is that America’s government schools are intellectually bankrupt and morally corrupt. To suggest otherwise is either disingenuous or a form of head-in-the-sand-ism.

Officially, America’s schools claim to teach no moral values per se. But that claim is contradicted by the fact that they constantly push moral values such as “diversity,” “equity,” “inclusion,” “tolerance,” moral relativism, and egalitarianism. Such “values” are intended to strip children of any standards or principles they may have previously embraced, so that the teachers can replace the sometimes conservative cultural values of the kids’ parents with the political values of today’s postmodern, cultural Left—namely, egalitarianism, multiculturalism, feminism, environmentalism, transgenderism, “social justice,” socialism, etc.

The curricula in America’s K-12 government schools (and in many of the most elite private schools) is now dominated by two offshoots of Critical Theory known as Critical Gender Theory (CGT) and Critical Race Theory (CRT). Developed in America’s “ed” schools and law schools, CGT and CRT seek to deconstruct and reinvent all traditional gender categories and racial relationships. The primary delivery mechanism for inciting this social revolution is America’s government school system.

The ultimate aim of Critical Gender Theory is to deconstruct the family and replace it with the State as the primary vehicle for educating children.

The specific political goal is to create a new class of the “oppressed.” From this new class of victims will come the new revolutionaries who will keep the revolution alive and move it to the next stage of development. This is the ultimate means by which capitalism is to be dismantled and the State is to become the final arbiter of the principle, “From each according to his ability, to each according to his need.”

The battlefront comes down to two core questions: first, who shall determine the sexual mores taught to America’s young children—parents or government teachers, and, second, what sex- and gender-related values should be taught to children in America’s government schools?

And yet these fundamental questions still don’t quite capture what’s at stake in this conflict. There’s an even deeper, metaphysical question that represents the new battleground between parents and America’s Education Establishment: What is the sex-gender “identity” of each and every child? To put the issue in even simpler terms, the question is: what is a boy and what is a girl?

For tens of thousands of years, the answers to these two questions were self-evidently obvious the moment a child was born. Today, however, the answers are uncertain until the child answers them with the assistance of government schoolteachers and administrators. The question is no longer settled by nature and science and nurtured by parents.

The following newspaper headline from 2022 sums up the current state of our world: “Texas Teacher Claims 20 Fourth Graders Out of 32 Students Identify as LGBTQ”![8] The teacher was proud to share this information with reporters during the school’s well publicized “pride” march. (The teachers’ pride in this “fact” no doubt raises her professional social status.) Just so we’re clear, the teacher’s claim means that almost 63 percent of students in her fourth-grade classroom in Texas—I repeat, Texas—identify as LGBTQ. Now think about what this means (statistically, it is virtually impossible)—it basically means that this teacher is either lying, engaging in wish fulfillment, or grooming. I can see no other options.

We have entered a Brave New World. This is penultimate stage of western nihilism.

The best overview I’ve seen comes from a veteran teacher in California. Peter Laffin writes in American Thinker The Truly Remarkable Thing about Florida’s Anti-Grooming Law.  Excerpts in italics with my bolds and added images.

It is difficult to remain objective over the Florida education fracas. So much of the episode fires up the amygdala. The innocence of children. The rights of parents. The sovereignty of individual identity. The never-ending scandal of humans and sex. To feign “neutrality” in this conflict is a sort of moral suicide. If none of this matters, what possibly could?

As someone who taught school in progressive enclaves for 14 years, I can attest that there are many good people who oppose this law for fear that it will diminish the humanity of loved ones and reverse the tide of social progress. Although I do not believe that this law will have that effect, I respect the sincerity of those who do.

Nonetheless, it remains urgent to speak the truth plainly and oppose the ever-intensifying spread of radical social theory being taught to ever-younger students.

Instances of ideological excess in American classrooms are well chronicled and widespread. We have seen enough to know that the time to act has long since passed. The Florida anti-grooming law is a necessary tool to blunt this advance, even though it seems conspicuously tame upon closer inspection. Its most controversial aspect, from which the clever but disingenuous “don’t say gay” moniker was derived, would have been uncontroversial in any other era:

“Classroom instruction by school personnel or third parties on sexual orientation or gender identity may not occur in kindergarten through grade 3 or in a manner that is not age appropriate or developmentally appropriate for students in accordance with state standards.”

The key term for those still attempting to comprehend this law is “instruction.” The target is not the casual reference, but rather the systematic instruction of academic gender theory to prepubescent children. For instance, it has become common for teachers to utilize resources like “The Genderbread Person” in SEL (social-emotional learning) curricula, as well as other ideologically tinged materials that do not reflect settled science, let alone objective reality. 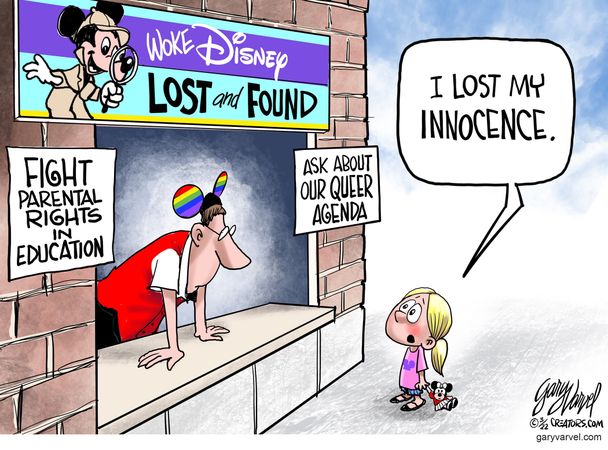 Further, such instruction materials necessarily force teachers to operate beyond their professional depth and predetermined range of responsibility. Teachers are not psychologists. This was pointedly demonstrated by a mother who spoke at a PTA meeting in Spreckles, California after her daughter’s teacher admitted to stalking her online in order to recruit her into an LGBTQA+ club. “Do you have a doctorate in psychiatry that I don’t know about?” she asked. Also, teachers are not paid by taxpayers to be activists involved in recruiting 5- to 8-year-olds into political causes. Too many teachers have departed the realm of education and entered into the realm of indoctrination, and often with a creepy, messianic air. As such, they must be reined in.

The Florida law prohibits teachers from formally instructing students on these matters before the 4th grade. Until then, the situation will remain in the hands of the students’ families and their doctors. 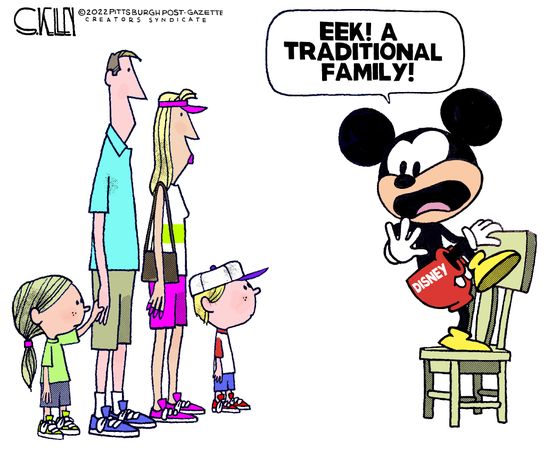 It would be difficult to contrive a more sensible demand in reaction to the current climate. This is perhaps the most stunning aspect of the entire controversy. Beneath the wailing and screeching is an utterly reasonable request.

And as such, it is no surprise that the vast majority of Floridians support the new law, along with the vast majority of the U.S. voting population. Nor is it a surprise that voters who have read the actual text of the law support it in even greater numbers. Even a majority of Democrats back the legislation. And yet, outlets like NPR and CNN, and subsequently their audiences, have reacted to its passage as though it were an edict from the pope. The cultural left’s blind spot here is profound. At this point, the DNC and its media allies should be charging Ron DeSantis consulting fees. No one is working harder to elect him president. 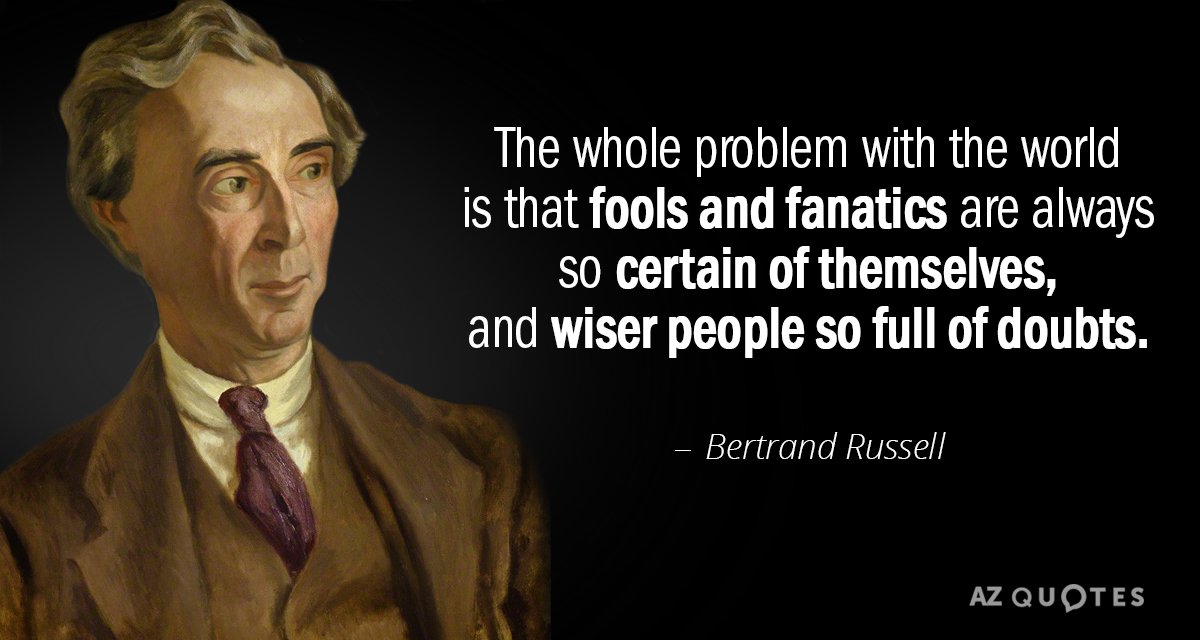 “The fundamental cause of trouble in the modern world,” philosopher Bertrand Russell once said, “is that the stupid are full of certainty, while the intelligent are full of doubt.” For years, the cultural left has taken the Democrat party hostage and forced it to abandon any pretense of intellectual humility, let alone electoral realism. Both parties have undergone bouts of dangerous self-certainty in recent times. The Republican Party was guilty of this during the Iraq war. But it is obvious that today’s Democratic Party has claimed pathological self-certainty as its banner. While even the most egalitarian countries in the West retreat from pushing gender ideology on prepubescent children, American liberals appear bent on doubling down.

Because of the emotional component, it is understandably difficult to zoom out and gain perspective. But the current environment beggars belief. Can the cultural left really be so certain of an academic theory — so certain that sex is “assigned” at birth as opposed to “observed” in the same manner as eye and hair color, weight, and length — that they will continue to demand its presence in early childhood curriculum? Even at the cost of looming political catastrophe?

It’s still possible that it will relent. But it will require a good dose of humility.

Peter Laffin is a teacher and writer in Laguna Niguel, California. His work has appeared in the American Spectator.

For more on SEL, see Why the Classroom Activists Never Give Up

“Social-Emotional Learning supposedly arose out of the COVID-19 pandemic and a need to attend to the emotional psyches of fragile youth. It is a shift in the role of a teacher from an educator to a therapist and places a high value on a child’s emotional competency over academic performance. After locking kids in their homes, isolating them from their peers, muzzling them with ineffective face diapers, and pounding them with fear and doom for 2 years, activists have swooped in to provide emotional support in the classroom once they were permitted to return. In typical government fashion, it seems like a solution looking for a problem. They didn’t create SEL to mend the fragile psyches of youth, they damaged the fragile psyches of youth to push SEL.”

“In a recent Twitter thread by podcaster Josh Daws of the Great Awokening Podcast, Daws lays out in 23 tweets how CRT and gender ideology have been deployed sequentially and their effect on the minds of America’s youth. Based on the work of postmodern critic James Lindsey, Daws suggests that the opening salvo of CRT was to tear down approved identity in the youth. It imparts guilt, shame, and social rejection of majority identities like whiteness, maleness, a binary gender paradigm, or even heterosexuality. Once a person has been made to reject their own race, gender, or sexuality, it is followed up with an approved list of identities from which they can choose in order to be socially accepted.”