Tom Slater reports on this social cancer and the need to excise it in his Spectator article Just stop Just Stop Oil.  Excerpts in italics with my bolds and added images.

Why block roads? Why make people’s lives miserable? Who do you think this is going to convince? So go the interminable TV-news debates after each disruptive piece of direct action by eco-troupe Extinction Rebellion and the various single-issue offshoots, such as Just Stop Oil, that it has inspired.

These past two weeks, Just Stop Oil has been back in the spotlight. It is now into its 12th consecutive day of action in London, demanding the government stop all oil and gas production. Yesterday, its activists blocked roads in Knightsbridge, delaying an ambulance, a fire engine and cars carrying babies to hospital. Today, they’re sitting in the road outside parliament.

Once again, all these hi-vis-clad protestors have managed to achieve, beyond disrupting the days of ordinary people and the work of the emergency services, is to infuriate members of the public up and down the country.

But the tactics of Just Stop Oil, Insulate Britain and other groups make a lot more sense when you realise that the point of these protests is to disrupt the lives of working-class people. Indeed, the future these bourgeois irritants envisage would sacrifice ordinary people’s living standards on the altar of eco-austerity.

It’s perhaps too easy to portray Extinction Rebellion as dominated by the posh and over-educated. But only because this is a factually accurate characterisation. Academic research has shown that XR activists are overwhelmingly middle class and a whopping 85 per cent of them have degrees.

There’s a reason for this class skew. The eco agenda is essentially about making life harder for anyone who doesn’t work primarily on a laptop, who can’t cycle to work, who drives for a living, or who just isn’t convinced that soaring energy costs are the price we must pay for progress.

In groups like Just Stop Oil we see a perfect fusion of political goals and political tactics.

The class tensions of it all have become crystal clear in the repeated scenes of builders, delivery men and otherwise irked members of the public having to drag these activists off the road so they can go about their business – as we saw in Knightsbridge again yesterday.

‘I will start moving these people myself, I ain’t f****** about’, said one man, who told the protestors he didn’t give a ‘flying s***’ about what they had to say.

The chasm between the protestors and the public grows wider with each protest. In another clip from this week, a man says to the road-blocking activists: ‘Somebody’s sick, get off the road!’ To which a protester replies, remarkably: ‘If somebody’s sick, they shouldn’t be driving.’ The man is then forced to spell out that ‘they’ve got a passenger who is sick’. ‘Are you silly?’, he adds.

Direct action is supposed to be disruptive, of course. But the protestors’ callous indifference to the disruption they are causing speaks to something deeper about their movement. It has become so cultish and myopically obsessed with saving ‘the planet’ that it has become entirely alienated from the needs of human beings.

We glimpsed this in Just Stop Oil’s media appearances yesterday. During an interview on GB News, a young man, apparently convinced that we are on the brink of ‘societal collapse’, suggested his cause was ‘more serious actually’ than the plight of a sick person in an ambulance, stuck behind his friends’ human roadblock.

This indifference makes ordinary people all the more infuriated when the police seem incapable of dealing with these protests in a timely fashion. In some cases, officers have even appeared to indulge protestors. At an Insulate Britain roadblock last year, one officer was filmed telling the activists to let them know if they ‘need anything’.

Everyone supports the right to protest, of course. There is just no right to glue yourself to a road for hours on end. Now more and more members of the public are willing to do what the police are apparently so incapable of doing. And who could blame them?

These aren’t protests for the climate, they’re protests against ordinary people.

Having failed at the ballot box, millennial climate activists will
pursue any means to impose their will on society 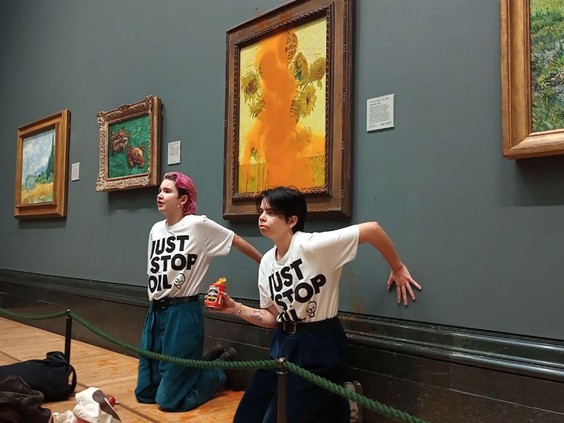 A handout picture from the Just Stop Oil climate campaign group shows activists with their hands glued to the wall under Vincent van Gogh’s “Sunflowers” after throwing tomato soup on the painting at the National Gallery in central London on October 14, 2022.