Marlo Thomas explains in his Real Clear Energy article Expensive Energy Is a Core Feature, Not a Bug, of Biden’s Climate Agenda.  Excerpts in italics with my bolds and added images.

The great Austrian economist Ludwig von Mises was being generous by describing interventionism’s nasty side-effects as “unintended.” Some younger interventionists are naïve, and know not what they do, but the older, street-smart captains of progressive politics understand the harms their policies entail. For them, the adverse consequences are features, not bugs.

The only downside is the risk of political retribution at the polls.

That’s the predicament in which the Biden administration now finds itself. It is also the theme of “Energy Inflation Was by Design,” a new report by supply-chain consultant Joseph Toomey.
[Synopsis is in previous post Energy Inflation Playbook]

President Biden and congressional Democrats want to replace fossil fuels with a “zero-carbon” energy system. Their biggest win to date is the comically mistitled Inflation Reduction Act (IRA). A Penn-Wharton analysis estimated that the IRA would increase federal climate and energy spending by $369 billion over ten years. A recent article in The Atlantic touts a Credit Suisse estimate that actual climate-related federal support could reach $800 billion. That’s because the incentives for electric vehicles and renewable energy are “uncapped tax credits.” Moreover, since federal spending leverages private-sector investment, total economy-wide green-tech spending could increase by as much as $1.7 trillion. 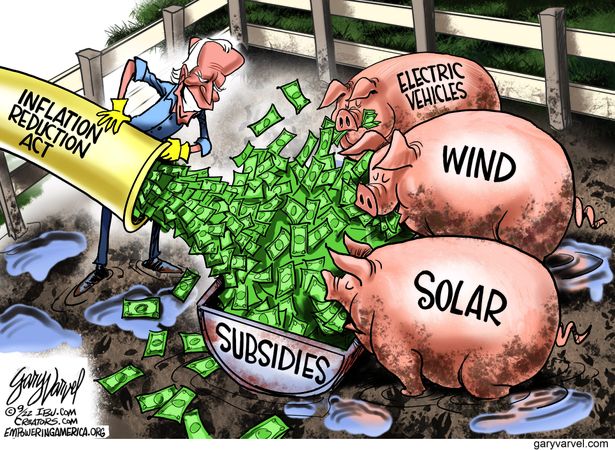 Nor is that all. The Department of Energy (DOE) estimates that the IRA has increased its loan program authorities by up to $350 billion.

No wonder Democrats celebrated the IRA’s enactment. No bigger program to rig energy markets against fossil fuels was ever enacted.

The IRA aims to enrich thousands of enterprises, tens of thousands of employees, and millions of shareholders—all dependent on Democrats to keep the gravy train flowing. Hardly an “unintended” consequence.

But voters see and feel the downsides of Biden’s war on fossil fuels: the high costs of gasoline, electricity, and other utilities, which in turn increase the costs of food, rent, and consumer goods. Those effects, moreover, coincide with high general inflation, a cratering stock market, and negative GDP growth in two consecutive quarters. Biden tries to blame Vladimir Putin and Big Oil for America’s energy woes. That is nonsense, and the public isn’t buying it.

Toomey marshals overwhelming evidence that “energy inflation” is a core feature of the president’s climate agenda. And how could it be otherwise? A core progressive article of faith is that fossil fuels are too cheap because market prices do not reflect the “social costs” of carbon dioxide (CO2) and other greenhouse gases (GHGs). Accordingly, no matter how expensive or scarce fossil energy may become for other reasons, taxing or capping fossil-fuel consumption to make it even more costly is hailed as a “climate solution.” Of course, handicapping fossil fuels is also touted as a way to make renewables more “competitive.” As President Obama enthused, cap-and-trade will “finally make renewable energy the profitable kind of energy in America.”

The public, however, has repeatedly spurned proposals to tax or cap the carbon content of fuels or emissions. So, U.S. progressives now concentrate on rigging energy markets via targeted regulations, state-level renewable-energy quotas, and subsidies. As noted, the IRA sets a new standard for anti-fossil-fuel subsidies.

President Biden seeks to cut U.S. carbon emissions by 50-52 percent below 2005 levels by 2030 and achieve a zero-emission electricity sector by 2035. That means that about half of all U.S. fossil-fuel consumption must end in eight years. Few investors want to park their capital in rapidly contracting industries. So, thanks to Biden, the market forecasts that supplies of oil, gas, and coal will decline relative to demand—and prices will rise. The expectation of shrinking supplies and higher future prices puts upward pressure on energy prices today.

An irony noted by Toomey is that by endangering fossil-fuel energy supply, Biden has not only increased fossil-fuel energy prices but also boosted oil and gas company profits and stock values. The short-term enrichment of oil companies may well be an unintended consequence of a long-term agenda to put them out of business. On the other hand, Biden’s boost to oil industry profits is also the setup for further interventions popular with progressive activists and politicians—windfall profits taxes, export bans, and Federal Trade Commission investigations of “anti-consumer behavior.”

Toomey demolishes the Biden administration’s allegation that oil companies are deliberately reducing refinery utilization to constrict supplies and raise prices. In fact, refineries are running at higher utilization rates than ever (about 94 percent).

As a presidential candidate, Joe Biden promised to “get rid of fossil fuels,” assuring one activist, “I guarantee you. We’re going to end fossil fuel.”

Toomey reviews several Biden initiatives that back up such threats. The major ones, besides the government-wide, IRA-funded effort to channel “the flow of capital toward climate-aligned investments and away from high-carbon investments,” include:

Rejoining the Paris Climate Accords without asking for the Senate’s advice and consent;

Considering a non-attainment designation for ozone pollution that could curb drilling in the Permian Basin, which accounts for 43 percent of U.S. oil production; and

To provide historical context for the fiscal side of Biden’s climate agenda, Toomey discusses the Obama DOE loan program established by the American Recovery and Reinvestment (“Stimulus”) Act. The best-known program beneficiary was solar-panel manufacturer Solyndra, which filed for bankruptcy protection in 2011 despite receiving $535 million in DOE loan guarantees. Some readers may also recall a list of seven such “Stimulosers.”

In short, nearly seven out of ten Obama DOE loan recipients in a $32 billion loan program went bankrupt. The total federal financial support provided by the IRA for “climate-aligned” investments is potentially 36 times larger. The stage is set for scores of Solyndras. Toomey’s labor as a chronicler of the war on fossil fuels is nowhere near done.