For a change, note the Arctic ice chart above from AARI, the Arctic and Antarctic Research Institute, St. Petersburg, Russia.  Based upon such information, they are holding up the Polar Ocean Challenge exploration ship at Murmansk because of too much ice in the Northern Sea Route.  Any excessive delay puts at risk their plan to circumnavigate the North Pole counterclockwise, starting in Bristol, UK.

So what is going on with Arctic ice, and what is the outlook?

Half of the maximum ice extent is gone as of yesterday, and in a typical year, one third will remain when melting stops in September.  Remember that the days are already shortening while the warming momentum will take 2 more months to cease.  So 2016 started with about 15M km2 of ice, is now at 7.5M and is likely to end up about 5M km2. 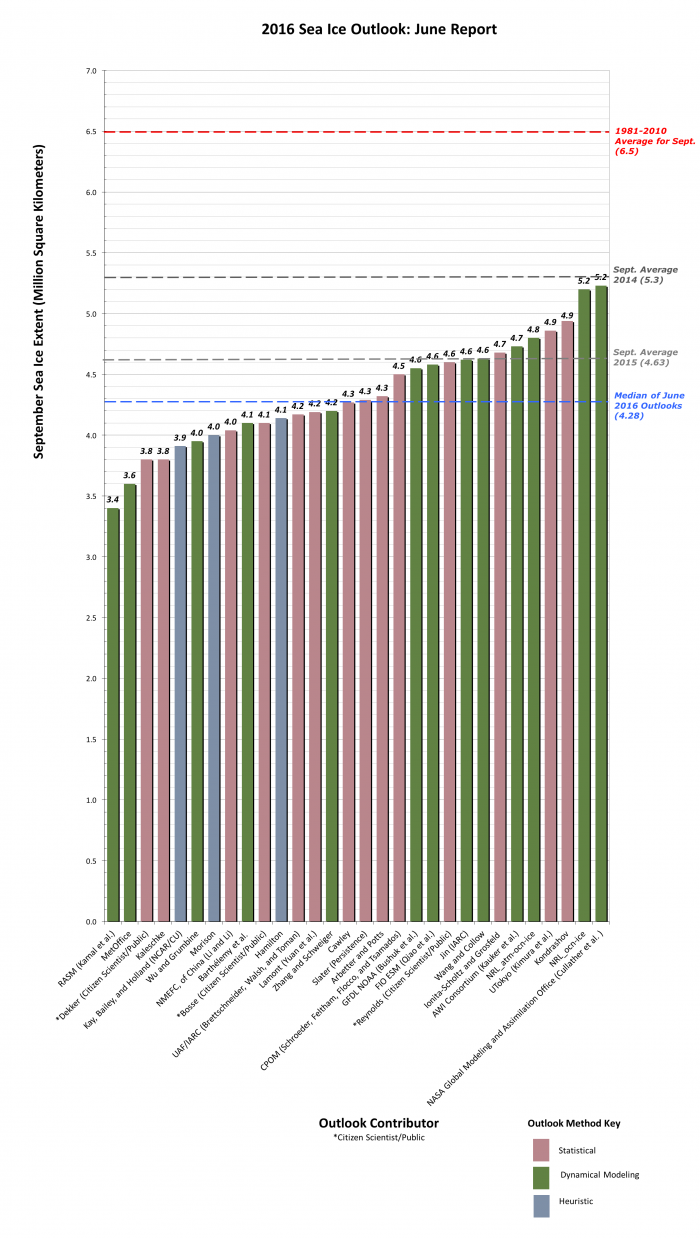 In the chart below MASIE shows 2016 Mid-July  Arctic ice extent has slipped below average and 2015. SII is back on line and was reporting similar extents during June (as it has in the past).  But in July SII was showing ~400k km2 less ice most days, but is now aligned with MASIE.  (SII and MASIE comparison is here.)

At the present pace of declining ice extents, 2016 is running five days ahead of the ten-year average, and seven days ahead of 2015.  By the end of July, both the average and 2015 ice extents will be about 7M km2, so a loss of 1M or more in the next 10 days.

Comparing the Arctic ice extents with their maximums shows the melting is occurring mostly in the marginal seas, now including Kara Sea as expected in July.

It is clear from the above that the bulk of ice losses are coming from Okhotsk, Barents and Bering Seas (100% melted), along with Kara Sea, Hudson Bay and Baffin Bay-St. Lawrence (67+% melted).  All of them are marginal seas that will go down close to zero by September.  Note: Some seas are not at max on the NH max day.  Thus, totals from adding losses will vary from NH daily total.

CPC shows the Arctic Oscillation waffling between positive and negative values, recently positive and forecasted to near neutral. Generally, positive AO signifies lower pressures over Arctic ice, with more cloud, lower insolation and less melting.  The outlook at this point is mixed.

We are well into the melt season, and the resulting minimum will depend upon the vagaries of weather between now and September.  Early on, 2016 was slightly higher than 2015 in March, lower in May and now tracking slightly below the past.  Note: 2016 melt season is starting without the Blob, with El Nino over, and a cold blob in the North Atlantic.  The AO has been hovering around neutral, now possibly indicating cloud cover reducing the pace of melting.

Meanwhile we can watch and appreciate the beauty of the changing ice conditions.

Footnote:  Regarding the colder than normal water in the North Atlantic

Changing ocean circulation in the North Atlantic could lead to winter sea ice coverage remaining steady and even growing in select regions.

The researchers analyzed simulations from the Community Earth System Model, modeling both atmosphere and ocean circulation. They found that decadal-scale trends in Arctic winter sea ice extent are largely explained by changes in ocean circulation rather than by large-scale external factors like anthropogenic warming.

From the Abstract of Yeager et al.

We present evidence that the extreme negative trends in Arctic winter sea-ice extent in the late 1990s were a predictable consequence of the preceding decade of persistent positive winter North Atlantic Oscillation (NAO) conditions and associated spin-up of the thermohaline circulation (THC). Initialized forecasts made with the Community Earth System Model decadal prediction system indicate that relatively low rates of North Atlantic Deep Water formation in recent years will result in a continuation of a THC spin-down that began more than a decade ago. Consequently, projected 10-year trends in winter Arctic winter sea-ice extent seem likely to be much more positive than has recently been observed, with the possibility of actual decadal growth in Atlantic sea-ice in the near future.