Imagery date refers to Google Earth capture of land forms. Ice extent is for August 30, 2016 from MASIE. Click to zoom in.

The tracking shows Northabout is struggling with some heavy seas and making slow progress toward her next port Tuktoyaktuk NWT Canada.

Today Serenity has been stationed for some hours off an obscure bay of Prince of Wales Island. Coningham Bay has nothing at all to recommend it except:

And in 2013, an explorer created these images and commentary: 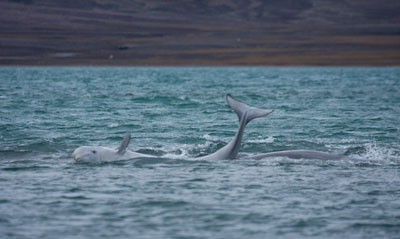 This was the scene at Coningham Bay, a shallow, broad bay with a shoal or sandbar extending across much of the entrance, protecting the waters inside. We were anchored just outside of the sheltered sub-bay.

From the very start, we had occasionally been seeing polar bears in the water, on shore and wandering the low hills. Polar bears are typically solitary, so during the summer months the only occasion on which you are likely to see more than one at a time is when there are a mother and cub.

Bears also typically hunt from the ice edge, so their being there on a quiet bay with no ice in sight was unusual, too. Something very special was going on. 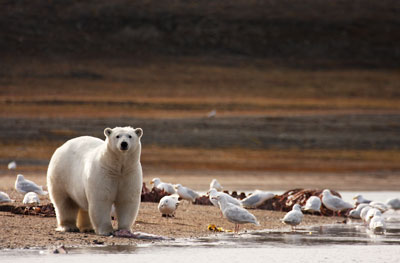