A recent publication by the Manhattan Institute looks at the costs of proposed climate change policies versus the estimated benefits.  Note that positive effects from warming are not included, only the benefits of reduced damages from assumed future warming.  Even on that narrow basis, the costs of “fighting” climate change are vastly greater than simply adapting to a changing climate.  The paper is entitled: Climate Costs in Context (here).  Excerpts below

.The chain of causation from greenhouse gas emissions to human impacts is lengthy: economic growth, the energy intensity of economic activity, and the emissions profile of energy use all combine to determine emissions levels. Those emissions then produce a concentration of greenhouse gases in the atmosphere, from which climate models can offer projections of temperature increase. Other models must translate any given temperature increase into estimates of natural-world effects, such as sea-level rise, drought, or ecosystem disruption. And another set of models and qualitative analyses must try to estimate how those changes in the natural world will affect the society that emitted the greenhouse gases in the first place.

Scientific assessments vary widely at each of these steps. However, climate researchers have settled broadly on an expected temperature increase of 3 to 4 degrees Celsius by the year 2100 if efforts are not made to reduce emissions.

Climate Costs According to IPCC

To estimate the economic cost of warming, researchers use “Integrated Assessment Models” (IAMs), which translate a given level of warming into estimates of natural-world impacts and then economic costs. Such analysis requires as much art as science, and, especially for larger temperature increases, the results are highly speculative. Still, they offer the best available estimates and should indicate at least the relative magnitude of the threat. 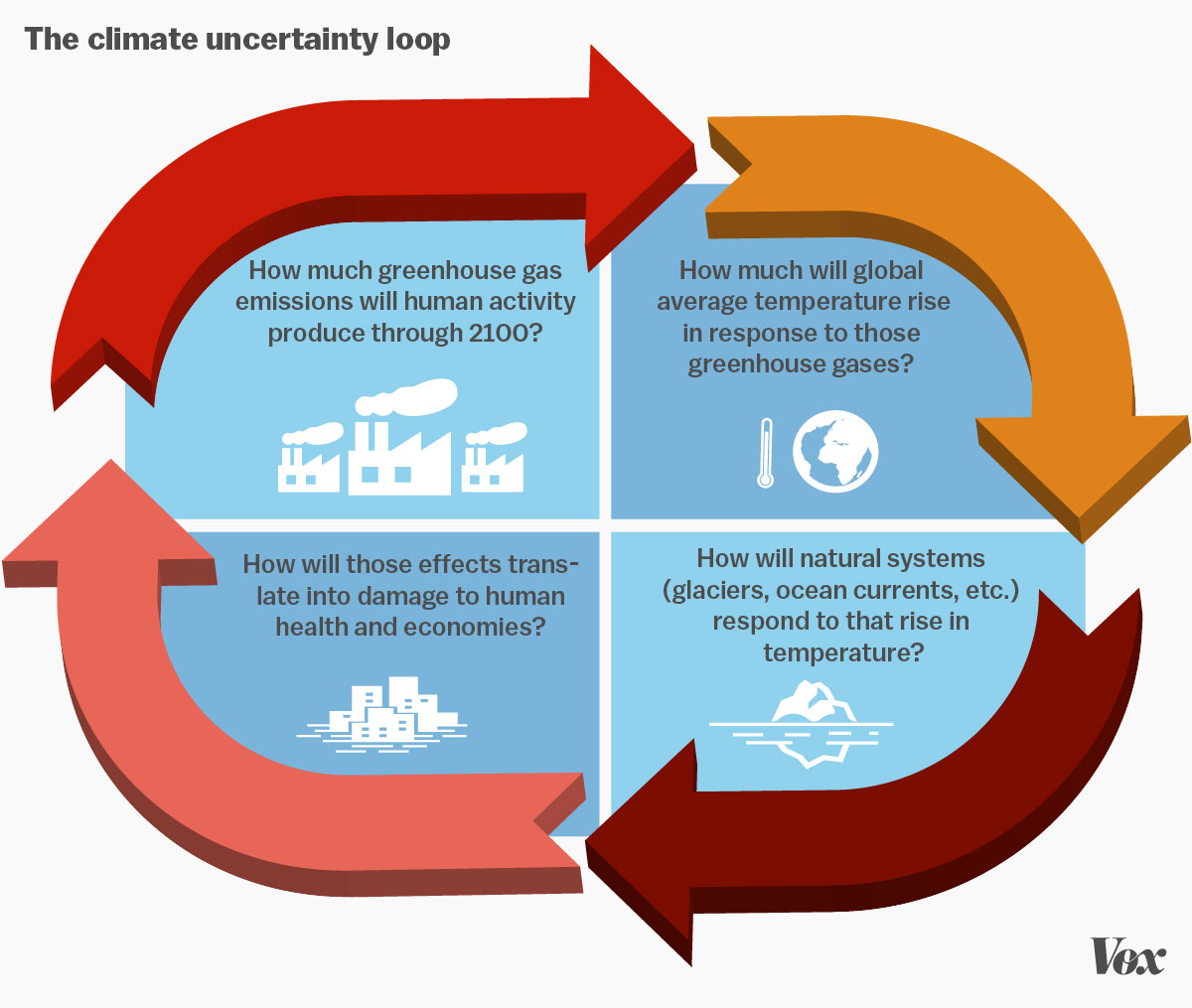 These are large costs—all three models estimate that global GDP will have grown to at least $500 trillion by 2100 versus a 2015 total of approximately $75 trillion. So if climate change reduces GDP in 2100 by 3%, that would represent $15 trillion—nearly the size of the entire American economy today. But by the standards of 2100, the cost is manageable.

Such modest economic estimates seem incompatible with the severe disruptions popularly assumed to accompany climate change. However, it is generally the popular assumption rather than the detailed economic research that is in error. For instance, while descriptions of sea-level rise often depict large scale melting in Greenland and Antarctica producing several meters of sea-level rise, such scenarios are forecast to play out only over the course of several centuries or even millennia.

The IPCC itself offered an estimate of what this might cost: “Some low-lying developing countries and small island states are expected to face very high impacts that, in some cases, could have associated damage and adaptation costs of several percentage points of GDP.”In other words, even for those poorest and most vulnerable countries, damage still amounts to only the small share of future wealth forecast in the economic models.

The pattern repeats itself across other potential effects of climate change. For instance, researchers call attention to the prospect of widespread ecosystem disruption and species extinction. The IPCC emphasizes: “With 4°C warming, climate change is projected to become an increasingly important driver of impacts on ecosystems.” But the actual magnitude of these impacts will only “becom[e] comparable with land-use change”—the disruption the world is already experiencing from human development. That disruption has not been costless—in either economic or less tangible terms—but neither has it produced widespread or insurmountable challenges to continued growth and prosperity.

Conclusion: Adapt Rather than Fight

Analyses consistently show that the costs of climate change are real but manageable. For instance, the prosperity that the world might achieve in 2100 without climate change may instead be delayed until 2102.

All these costs—both economic and noneconomic—are substantial and have the potential to cause significant damage and disruption. Policymakers should take them seriously and seek to reduce or prepare for them when the expected benefit of action exceeds the cost. However, none are outside the range of other challenges facing society, and none support the apocalyptic rhetoric of many politicians and activists.

The world is currently spending a lot fighting climate change:

This climate alarm industry, Climate Crisis Inc., is estimated to cost at least 1.5 trillion US$ each year.  That is 2% of present global GDP, and alarmist leaders say it isn’t making a difference.

Looking into the future, IEA expects additional spending just in the energy sector to meet climate change targets on the order of $35-trillion over the period 2015 to 2030. All this remarkable growth comes in a market for non-solutions to the non-problem of global warming.

For more on Uncertainties of Integrated Assessment Models:
https://rclutz.wordpress.com/2015/10/31/quiet-storm-of-lucidity/

Further comments by Oren Cass, author of the Mannhatton paper: