A tornado brews near El Reno, Okla., May 2013. A new study links the frequency of tornadoes and hailstorms in parts of the southern United States to ENSO, a cyclic temperature pattern in the Pacific Ocean. Credit: John Allen

“We can forecast how active the spring tornado season will be based on the state of El Niño or La Niña in December or even earlier,” said lead author John Allen, a postdoctoral research scientist at the International Research Institute for Climate and Society (IRI).

Allen and his coauthors show that moderately strong La Niña events lead to more tornadoes and hail storms over portions of Oklahoma, Texas, Kansas and other parts of the southern United States. El Niño events act in the opposite manner, suppressing both types of storms in this area.

While the information can’t pinpoint when and where storms will wreak havoc, it will nevertheless be useful for governments and insurance companies to prepare for the coming season, Allen said.

The Tornado statistics are available from the Storm Prediction Center (here).

In 2011–a La Niña year– tornadoes killed more than 550 people, higher than in the previous 10 years combined. Hail storms and tornadoes cause an average estimated $1.6 billion in insured losses each year in the United States, according to the insurer Munich RE. Powerful, isolated events such as the 2011 Joplin, Missouri, tornado can smash that average. That storm alone caused several billion dollars in damage and killed 158 people.

Image: La Niña is characterized by unusually cold ocean temperatures in the central equatorial Pacific. The colder than normal water is depicted in this image in blue. During a La Niña stronger than normal trade winds bring cold water up to the surface of the ocean. Credit: NASA

Past studies that have relied on eyewitness records alone have had limited success, said Allen. “For example, previous work has shown a clear linkage between ENSO and winter activity, but spring–the season when most of tornadoes occur in the southern U.S.–remained an enigma until now,” Allen said.

To get around these challenges, the Columbia University team created indices derived from environmental conditions such as wind shear, temperature and moisture. Each is a key ingredient in severe storm formation, and each is influenced by ENSO. The scientists then verified the indices using available observational records.

If La Niña strengthens beyond its present near-neutral condition, look for more killer tornados in the SE United States.  But it is not the fault of CO2 or fossil fuels.

I want to be as careful as the authors not to overstate the certainty of their findings. (h/t comment by Les Johnson).  Tornados are mesoscale events with multiple contributing factors.  Researchers have concluded that ENSO sets environmental conditions that favor or disfavor tornado formation, i.e. increase or decrease the probabilities. 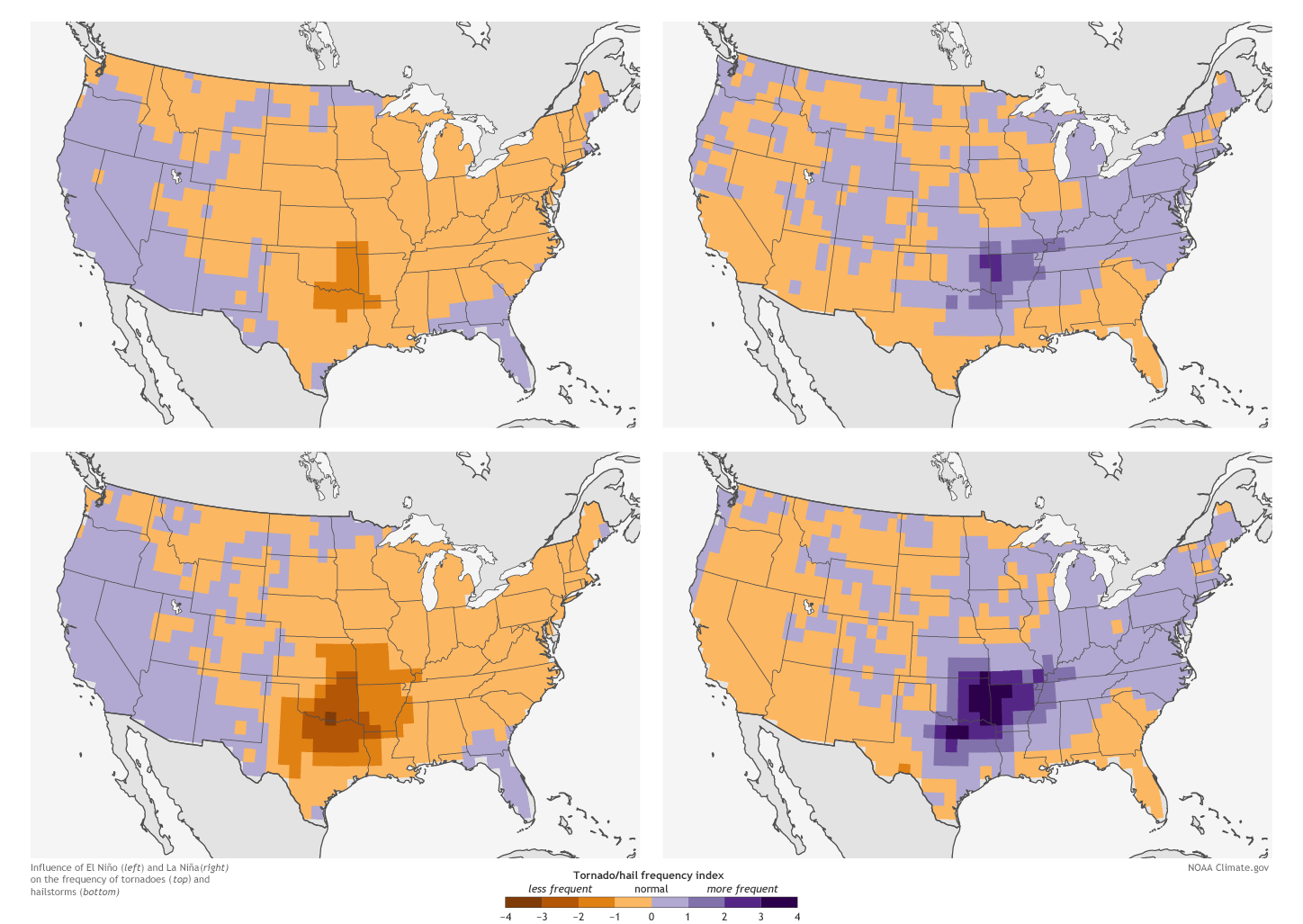 The research showed that ENSO affects tornado and hailstorm frequency by influencing the position of the jet stream over North America. El Niño weakens the surface winds that carry warm, most air from the Gulf of Mexico over Texas and neighboring states. La Niña, in contrast, concentrates hot, humid air over the region. The heat and humidity over the southern Plains states sets up a strong north-south temperature gradient, which in turn favors storm formation.

El Niño/La Niña conditions often persist from winter into spring, the researchers found, so the ENSO state seen in December, January, and February can be used to predict tornado and hailstorm frequency for March, April, and May.