A recent post Obsessed with Human CO2 pointed out how small is the amount of CO2 emissions from fossil fuels compared to natural sources. Human emissions fall within the error ranges around the estimates from land, oceans and biosphere. This post looks deeper into the issue and our current state of knowledge about attributing CO2 concentrations in the atmosphere.

Note the size of the human emissions next to the red arrow. (Units are in GT)

From Chapter 6 Working Group 1 AR5 with my bolds.

With a very high level of confidence, the increase in CO2 emissions from fossil fuel burning and those arising from land use change are the dominant cause of the observed increase in atmospheric CO2 concentration. About half of the emissions remained in the atmosphere (240 ± 10 PgC) since 1750. The rest was removed from the atmosphere by sinks and stored in the natural carbon cycle reservoirs. The ocean reservoir stored 155 ± 30 PgC. Vegetation biomass and soils not affected by land use change stored 160 ± 90 PgC. {6.1, 6.3, 6.3.2.3, Table 6.1, Figure 6.8}

Coupled carbon-cycle climate models indicate that less carbon is taken up by the ocean and land as the climate warms constituting a positive climate feedback. Many different factors contribute to this effect: warmer seawater, for instance, has a lower CO2 solubility, so altered chemical carbon reactions result in less oceanic uptake of excess atmospheric CO2. On land, higher temperatures foster longer seasonal growth periods in temperate and higher latitudes, but also faster respiration of soil carbon.

The removal of human-emitted CO2 from the atmosphere by natural processes will take a few hundred thousand years (high confidence). Depending on the RCP scenario considered, about 15 to 40% of emitted CO2 will remain in the atmosphere longer than 1,000 years. This very long time required by sinks to remove anthropogenic CO2 makes climate change caused by elevated CO2 irreversible on human time scale. {Box 6.1}

Alarmist Summary: All of the rise in atmospheric CO2 is caused by humans, is increasing and will last for 1000 years.

Fact 1. The Carbon Cycle System is estimated with uncertainties greater than human emissions.

Carbon fluxes describe the rate of exchange of carbon between the various carbon sinks / reservoirs.

The rate at which carbon is exchanged between these reservoirs depends on the conversion processes involved:

It is not possible to directly measure the size of the carbon sinks or the fluxes between them – instead estimates are made.

Because carbon fluxes are large and based on measurements from many different sources, estimates have large uncertainties.

A good summary description of carbon fluxes and reservoirs is at University of New Hampshire (here). This figure from IPCC AR4 shows how estimates have been developed. Explanation below with my bolds. 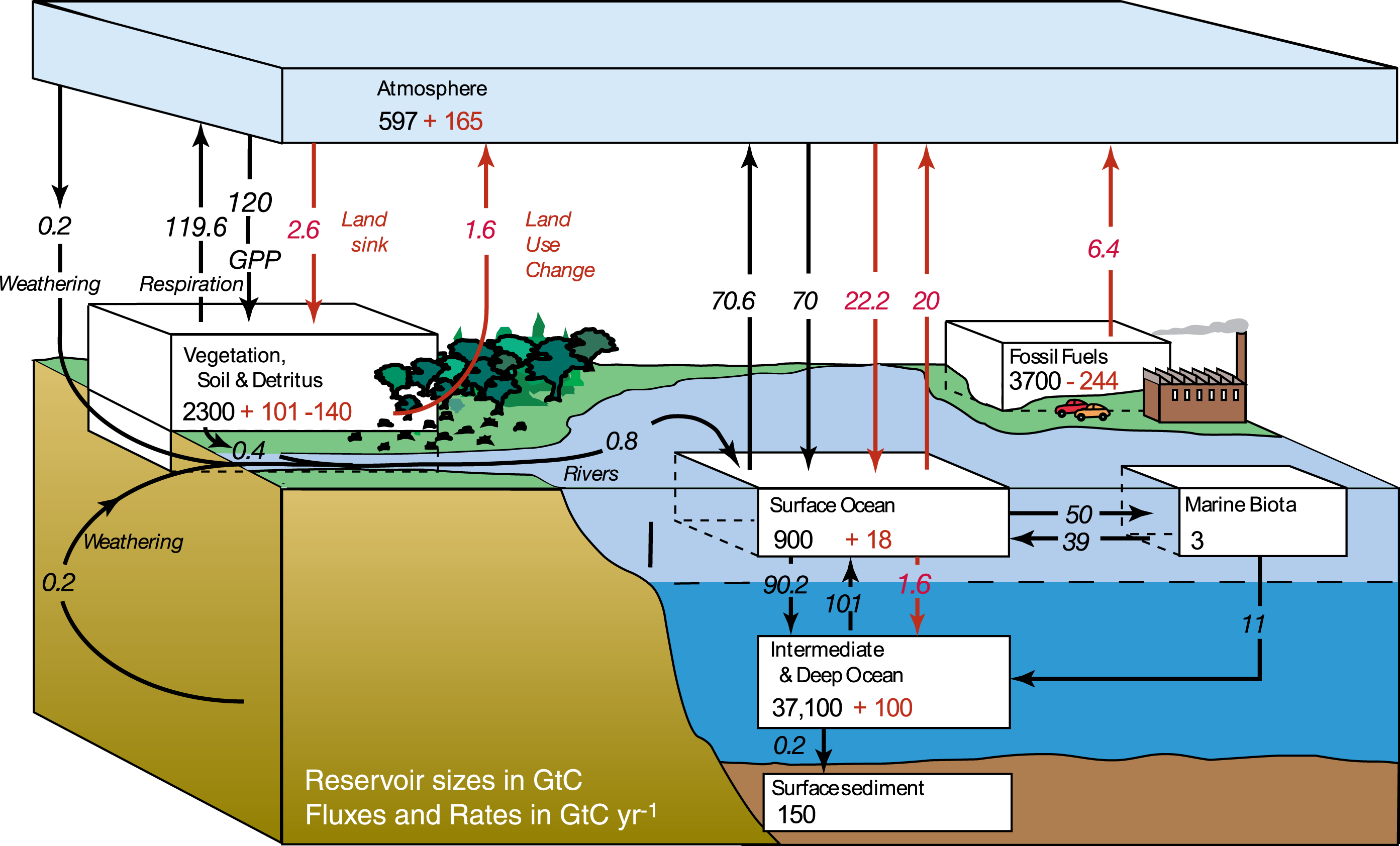 IPCC AR4WG1 Figure 7.3. The global carbon cycle for the 1990s, showing the main annual fluxes in GtC yr–1: pre-industrial ‘natural’ fluxes in black and ‘anthropogenic’ fluxes in red (modified from Sarmiento and Gruber, 2006, with changes in pool sizes from Sabine et al., 2004). The net terrestrial loss of –39 GtC is inferred from cumulative fossil fuel emissions minus atmospheric increase minus ocean storage. The loss of –140 GtC from the ‘vegetation, soil and detritus’ compartment represents the cumulative emissions from land use change (Houghton, 2003), and requires a terrestrial biosphere sink of 101 GtC (in Sabine et al., given only as ranges of –140 to –80 GtC and 61 to 141 GtC, respectively; other uncertainties given in their Table 1). Net anthropogenic exchanges with the atmosphere are from Column 5 ‘AR4’ in Table 7.1. Gross fluxes generally have uncertainties of more than ±20% but fractional amounts have been retained to achieve overall balance when including estimates in fractions of GtC yr–1 for riverine transport, weathering, deep ocean burial, etc. ‘GPP’ is annual gross (terrestrial) primary production. Atmospheric carbon content and all cumulative fluxes since 1750 are as of end 1994.

The diagram shows that anthropogenic emissions of CO2 from burning of fossil fuels cannot be the reason for the increase in atmospheric CO2.

It should be clear from the observational data that Earth’s biosphere is exerting a powerful brake on the rate of rise of the air’s CO2 content, such that the large increases in anthropogenic CO2 emissions of the past two decades have not resulted in any increase in the rate of CO2 accumulation in the atmosphere. The IPCC has yet to acknowledge the existence and sign of this negative feedback, choosing to rely on projections from the Coupled Model Intercomparison Project Phase 5 (CMIP5) models. Those models “consistently estimate a positive carbon cycle feedback, i.e. reduced natural sinks or increased natural CO2 sources in response to future climate change.” The models further find “in particular, carbon sinks in tropical land ecosystems are vulnerable to climate change” (p. 21 of the Technical Summary, Second Order Draft of AR5, dated October 5, 2012).

Fluxnet Observation Sites around the world.

Soils are the largest carbon reservoir of the terrestrial carbon cycle. Worldwide they contain three or four times more organic carbon (1500 Gt to 1 m depth, 2500 Gt to 2 m) than vegetation (610 Gt) and twice or three times as much carbon as the atmosphere (750 Gt, see Figure 1) [71]. Carbon storage in soils is the balance between the input of dead plant material (leaf, root litter, and decaying wood) and losses from decomposition and mineralization of organic matter (‘heterotrophic respiration’). Under aerobic conditions, most of the carbon entering the soil returns to the atmosphere by autotrophic root respiration and heterotrophic respiration (together called ‘soil respiration’ or ‘soil CO2 efflux’). The mineralization rate is a function of temperature and moisture levels and chemical environment with factors such as pH, Eh, nitrogen level and the cation exchange capacity of the minerals in the soil affecting the mineralization rate of soil organic carbon (SOC) [72, 73, 74, 75, 76, 77, 78]. Under anaerobic conditions, resulting from constantly high water levels, part of the carbon entering the soil is not fully mineralized and accumulates as peat.

Today, eddy covariance measurements of carbon dioxide and water vapor exchange are being made routinely on all continents.  The flux measurement sites are linked across a confederation of regional networks in North, Central and South America, Europe, Asia, Africa, and Australia, in a global network, called FLUXNET.  This global network includes more than eight hundred active and historic flux measurement sites, dispersed across most of the world’s climate space and representative biomes (Figure 1, 2). Fluxnet portal is here Excerpts with my bolds.

The flux network has also been pivotal in refining the functional response of net and gross carbon dioxide exchange with climatic drivers. One notable observation relates to the sensitivity of ecosystem respiration to temperature. That is, respiration is constant across climate and ecological space and increases by a factor of 1.4 with a ten degree increase in temperature. Another emergent property is the plasticity of the timing of the initiation of the growing season, and how it is triggered by when soil temperature matches mean annual air temperature.

One of the first and overarching things we have learned is “what is the net and gross annual carbon fluxes, at sites across the globe?” A collation of data has enabled the community to produce a probability distribution of net carbon exchange that is occurring across the network. We see that the central tendency of net carbon exchange is: −157±285 g C m−2 y−1 (Figure 1), representing a sink of carbon to the terrestrial biosphere from the atmosphere. We are also able to document the range of carbon uptake by terrestrial ecosystems. We find that the most negative tail of the histogram is about -1000 g C m−2 y−1. The most positive tail of the histogram, representing sites acting as carbon sources can be as large as +1000 g C m−2 y−1. Of course these values do not consider net biome exchange that would release pulses of carbon from fires or anthropogenic combustion of fossil fuels.

Fact 3. Fluxes are Dynamic and Difficult to Estimate Reliably.

This summary comes from Helge Hellevanga and Per Aagaard in Making Constraints on natural global atmospheric CO2 fluxes from 1860 to 2010 using a simplified explicit forward model (2015) Excerpt with my bolds.

The relative contribution of the emissions and the efficiency of the biosphere and the ocean to mitigate the increase in atmospheric CO2-concentrations, remain highly uncertain. This is demonstrated in chapter six of the latest IPCC report5, where we can read that the net land-atmosphere carbon flux in the 1980s was estimated to −0.1 ± 0.8 Gt C/a (negative numbers denote net uptake). These numbers were partly based on estimates of net CO2 releases caused by land use changes (+1.4 ± 0.8 Gt C/a), and a residual terrestrial sink estimated to −1.5 ± 1.1 Gt C/a.

There are globally much data supporting increased uptake of carbon by the ocean mixed layer (shallow surface water), but the global gross ocean-atmosphere fluxes, partly influenced by annual and inter-annual processes, such as El Niño/La Niña events, are nevertheless not easy to estimate. Obtaining global values of the carbon fluxes are further complicated by large local and regional variations in carbon releases and uptake by the terrestrial biosphere.

APO values are however not straightforward to estimate, and a recent study suggests that the strength of the terrestrial sink may be significantly lower than found earlier. Moreover, current measurements of the atmospheric O2/N2 ratio and CO2 concentrations may suggest that the amount of oxygen is dropping at a faster rate than calculated from the APO tracer values.

Fact 4. The Carbon Cycle is driven by Temperature more than Human Emissions.

However, the current global carbon balance is disturbed by two factors: one is anthropogenic carbon emissions from fossil fuel combustion and land use change, which are 9–10 Pg C per year [74], i.e. equal to 1/22–1/26 of the natural emissions from terrestrial and oceanic biospheres; and the other is that increasing temperature can result in a positive feedback of carbon emissions caused from a greater soil heterotrophic respiration and from oceanic ecosystems [77, 78]. This increased emission will be reserved in atmosphere and contribute to the increase of atmospheric CO2 concentration if it cannot be absorbed by ecosystems. In this sense, in addition to the anthropogenic carbon emissions, the positive feedback of terrestrial and marine ecosystems to global warming may be another important source of the increasing atmospheric CO2 concentration. The estimation of global carbon budget indicates that a total of the natural and anthropogenic emissions are 250 Pg C per year, whereas the total of absorption by the natural ecosystems and the atmosphere is estimated as 230 Pg C per year (Table 2). This generates a gap of 20 Pg C between the global emissions and absorptions, which is twice the current total anthropogenic emissions (9–10 Pg C/yr). Therefore, there is a great uncertainty in the sources of the increased atmospheric CO2, and we may not reach to the conclusion that elevating atmospheric CO2 concentration is mainly from human activities.

Tom Segalstad describes how alarmist dogma evolved in order to explain away contradictory facts. His paper is Carbon cycle modelling and the residence time of natural and anthropogenic atmospheric CO2 : on the construction of the “Greenhouse Effect Global Warming” dogma. Excerpts with my bolds.

Both radioactive and stable carbon isotopes show that the real atmospheric CO2 residence time (lifetime) is only about 5 years, and that the amount of fossil-fuel CO 2 in the atmosphere is maximum 4%. Any CO level rise beyond this can only come from a much larger, but natural, carbon reservoir with much higher 13-C/12-C isotope ratio than that of the fossil fuel pool, namely from the ocean, and/or the lithosphere, and/or the Earth’s interior.

The apparent annual atmospheric CO level increase, postulated to be anthropogenic, would constitute only some 0.2% of the total annual amount of CO exchanged naturally between the atmosphere and the ocean plus other natural sources and sinks. It is more probable that such a small ripple in the annual natural flow of CO would be caused by natural fluctuations of geophysical processes.

Segalstad was a reviewer for IPCC assessment reports in the early days before observational facts were set aside in favor of the agenda and climate models tuned to suit the narrative. His whimsical comment on the experience:

For more on CO2 interchange between ocean and air, see Fear Not CO2: The Real Chemistry

For more on temperature impacting terrestrial CO2 sources, see Not Worried About CO2