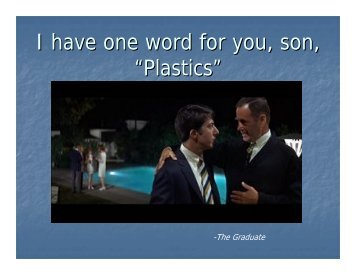 Despite the welcome presence of plastic items in our lives, there is mounting plasticphobia driven by the usual suspects: Multi Million Dollar enterprises like Greenpeace, Sierra Club, Natural Resources Defense Council, etc. The media and websites stoke fears and concerns about traces of chemicals used in making plastic products. The basic facts need reminding in this overheated climate of fear, so this post exposes widely observed poppycock about plastics with facts to put things in perspective.

Below are some points to consider in favor of plastics.  Examples below frequently mention plastic bags, bottles, and food containers, all subject to demonizing reports from activists.

It feels like we have always had plastic. It is so widespread in our lives that it’s hard to imagine a time without it. But in reality, plastic products were only introduced in the 1950s. That was a time when the Earth’s population was 2.5 billion people and the global annual production of plastic was 1.5 million tonnes. Now, nearly 70 years later, plastic production exceeds 300 million tonnes a year and the world population is on its way to 8 billion. If this trend continues, another 33 billion tonnes of plastic will have accumulated around the planet by 2050.

They are not just a convenience to carry groceries, but a necessity playing an important role to facilitate impulse purchases and for the management of household and pet waste; and in Toronto, organics collection. They have very high alternate use rate in Ontario of 59.1% (Ontario MOE (data).

A move to reusable bags will not eliminate the need for shorter-life bags. Householders will have to supplement their use of reusable bags with a paper or kitchen catcher type bags for household and pet waste. In Ireland, the virtual elimination of plastic bags because of a high bag tax, led to a 77% increase in the purchase of kitchen catchers which contain up to 76% more plastic than conventional plastic bags and a 21% increase in plastics consumed. The fact they are a necessity is reinforced by Decima Research which shows that 76% of Canadians would purchase kitchen catchers if plastic shopping bags are not available at retail check outs.

Beyond bags, manufacture of goods such as automobiles increasingly use plastics to reduce weight and fuel consumption, as well as meet requirements for recycling.

Plastics are Cheap.
Alternatives consume much more energy. Plastics are made mostly of petroleum refining by-products. On top of all this, if plastic bag bans like California’s end up causing people to use more paper bags — instead of bringing their reusable ones to the store — it’ll certainly end up being worse for the environment. Research shows that making a paper bag consumes about four times more energy than a plastic bag, and produces about four times more waste if it’s not recycled.

These numbers can vary based on agricultural techniques, shipping methods, and other factors, but when you compare plastic bags with food, it’s not even close. Yet for whatever reason, we associate plastic bags — but not food production — with environmental degradation. If we care about climate change, cutting down on food waste would be many, many times more beneficial than worrying about plastic bags.

Plastics are Durable.
Plastics are highly inert, do not easily degrade or decompose. Without sunlight, they can last for centuries.

Almost all bags are reusable; even the conventional plastic shopping bag has a reuse rate of between 40-60% in Canada.

Conventional plastic shopping bags are highly recyclable in Canada because there is a strong recycling network across the country. Recycling rates are quite high in most provinces.

Plastics are Abused.
Because plastic items are useful, cheap and durable, people leave them around as litter.
Plastics should be recycled or buried in landfill.

In a properly engineered landfill, nothing is meant to degrade. No bag – reusable or conventional plastic shopping bag – will decompose in landfill. which actually helps the environment by not producing greenhouse gases like methane.

This myth is based on a common misunderstanding of the purpose of landfills and how they work. Modern landfills are engineered to entomb waste and prevent decomposition, which creates harmful greenhouse gases like methane and carbon dioxide.

In Canada, plastic shopping bags are primarily made from a by-product of natural gas production, ethane.

Polyethylene bags are made out of ethane, a component of natural gas. Ethane is extracted to lower the BTU value of the gas in order to meet pipeline and gas utility specifications and so that the natural gas doesn’t burn too hot when used as fuel in our homes or businesses. The ethane is converted, and its BTU value is “frozen” into a solid form (polyethylene) using a catalytic process to make a plastic shopping bag.

There have been claims that chemicals in plastics can leach into food or drink and cause cancer. In particular, there have been rumours about chemicals called Bisphenol A (BPA) and dioxins. Hoax emails have spread warnings about dioxins being released when plastic containers are reused heated or frozen. These are credited to Johns Hopkins University in America, but the university denies any involvement.

Some studies have shown that small amounts of chemicals from plastic containers can end up in the food or drinks that are kept inside them. But the levels of these are very low.

Studies may also look at the effect of these chemicals on human cells. But they will often expose them to much higher levels than people are exposed to in real life. These levels are also much higher than the limits which are allowed in plastic by law. There is no evidence to show using plastic containers actually causes cancer in humans.

The European Food Safety Authority did a full scientific review of BPA in 2015 and decided there was no health risk to people of any age (including unborn children) at current BPA exposure levels. They are due to update this in 2018.

In the UK there is very strict regulation about plastics and other materials that are used for food or drink. These limits are well below the level which could cause harm in humans.

“Generally speaking, any food that you buy in a plastic container with directions to put it in the microwave has been tested and approved for safe use,” says George Pauli, associate director of Science and Policy at the US FDA’s Center for Food and Safety and Applied Nutrition.

Elizabeth Whelan, of the American Council on Science and Health, a consumer-education group in New York think that the case against BPA and phthalates has more in common with those against cyclamates and Alar than with the one against lead. “The fears are irrational,” she said. “People fear what they can’t see and don’t understand. Some environmental activists emotionally manipulate parents, making them feel that the ones they love the most, their children, are in danger.” Whelan argues that the public should focus on proven health issues, such as the dangers of cigarettes and obesity and the need for bicycle helmets and other protective equipment. As for chemicals in plastics, Whelan says, “What the country needs is a national psychiatrist.”

Plastics are A Scapegoat.
Rather than using plastics responsibly, some advocate banning them.

The type of bag you use makes less importance than what you put into it. When it comes to both climate change and trash production, eliminating plastic bags is a symbolic move, not a substantial one. Encouraging people to cut down on food waste, on the other hand, would actually mean something.

Focus on the less than 1% of plastic bag litter does not address the other 99% of litter. Litter is a people problem, not a litter problem. Even if you removed all plastic shopping bag litter, 99 % of the litter would still be a problem.

Believe it or not, plastic bags are one of the most energy efficient things to manufacture. According to statistics, less than .05% of a barrel crude oil is used for the manufacturing of plastic bags in the US. On the other hand, 93% to 95% of each barrel is used for heating purposes and fuel.

So, banning or taxing plastic bags will really do nothing to curb America’s oil consumption. After all, it hardly uses a fraction!