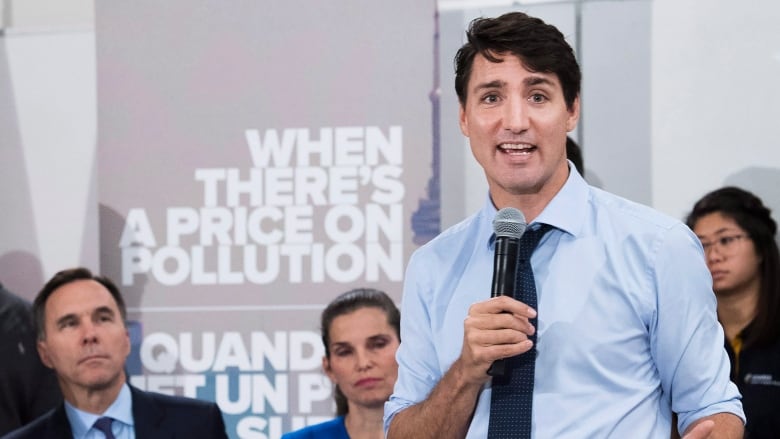 Canadian Prime Minister Justin Trudeau is announcing his national carbon tax even while the Canadian public is having second and third thoughts about global warming and human causation. An Angus Reid poll this summer shows how belief in the need for such a policy is wavering. The report is Carbon conflict: two-thirds of Canadians say provinces should have the final say on pricing

Before getting into the federal/provincial tug of war, let’s consider the basic belief. Angus Reid has been asking Canadians the same question since 2009, with these responses.

Note in 2009 63% believed that “global warming is a fact and mostly caused by humans”. That dropped down to 52%, then came back to 62% in 2014 when the Obama administration was beating the climate change drum for all it was worth. In Canada Trudeau’s Liberal party led in the polls on the way to winning power in October 2015.

Now let’s consider the polling in July of 2018.

Belief in man-made global warming is back down to 56% in the context of Trump’s skepticism and the Paris Accord proving ineffectual. This first 2018 chart includes regional and age distributions showing that younger people (<35 yrs old) are much more often believers, becoming more skeptical (50/50) with age. Ironically, that young cohort has not witnessed any actual warming in their adult lives.

The three largest cities in Canada are Vancouver, Toronto and Montreal.  Not surprisingly, belief is strongest in the provinces of B.C., Ontario and Quebec, along with Atlantic region. The prairie provinces are definitely not on side.

Another table shows that income level is not a driver, except for the more wealthy being somewhat surer of their opinions. However, global warming belief is strongly associated with university education, and with voting for left-wing parties (in Canada Liberal and NDP). It seems the educational system is aligned with left wing views on many things, including the climate.

Angus Reid asked the same questions of Canadian, British and American citizens in 2010, with these results in the context of Obama mania and the Copenhagen COP drama.

As the article title suggested, the landscape is not favorable for the Liberal’s tax plan.  For example

Moreover, both Ontario and Quebec have recently elected business-oriented provincial premiers, with Alberta likely to follow suit in the next election on or before May 31, 2019.  That may explain this result. Angus Reid observed that those who want no tax at all opted for provincial jurisdiction.