Today 16 November 2018, representatives from 60 nations agreed unanimously to an historic revision of the International System of Units (SI). The press kit for the 26th General Conference on Weights and Measures (CGPM) provides the details and implications. Excerpts in italics with my bolds.

Why is the SI important?  The name International System of Units, with the abbreviation SI, was given to the system in 1960. The SI units form a foundation for measurement across the world to ensure consistency and reliability. They are the basis of trading, manufacturing, innovation and scientific discovery around the world.

SI units can provide new opportunities for innovation. Some examples where greater accuracy is supporting better methods and understanding with a positive impact on society include:  The accurate measurement of temperature: This will support the ability to identify and measure reliably very small changes across large time periods with greater accuracy. Therefore, it will allow for precise monitoring and better predictions for climate change.  The accurate administration of drugs: The pharmaceutical industry needs to use a standard for very small amounts of mass in order to make dosages of medication even more appropriate for patients.

SI units can help us support innovation into the future. As our ability to measure properties improves, the standards we have for measurement will need to keep up. The accuracy of services like the Global Positioning System (GPS) are limited by our ability to use standard units, in this case the second to measure time. We can track our locations effectively because we can establish time using the SI definition of a second, which can be realized by an atomic clock. This advancement was made possible because society had defined the second more accurately well before we had even discovered what it could be used for. The atomic clock was made before computing really took off. Now, accurate timing is a fundamental part of the industry; without it, the internet, mobile phones and other technologies could not work reliably.

How are the units of measurement defined? Originally, measurement units were defined by physical objects or properties of materials. For example, the metre was originally defined by a metal bar exactly one metre in length.

However, these physical representations can change over time or in different environments, and are no longer accurate enough for today’s research and technological applications. Over the last century, scientists measured natural constants of nature, such as the speed of light in a vacuum and the Planck constant, with increasing accuracy. They discovered that these are more stable than physical objects, and fixed numerical values to the constants. These natural constants do not vary, so are at least one million times more stable.

This revision of the SI will, for the first time, see all base units in the SI defined by the constants of physical science that we use to describe nature. Using the constants we have found in nature as our universal basis for measurement allows not only scientists, but also industry and society, to have a measurement system that is more reliable, consistent, and scalable across quantities, from very large to very small.

There are two key ways the SI will change to create a more stable and future-proof basis for measurement:

It will take physical artifacts out of the equation: the kilogram is still defined by a physical object equal to the mass of the International Prototype of the Kilogram (IPK), an artifact stored at the International Bureau of Weights and Measures (BIPM) in France. This revision will finally remove the need for this last artifact. 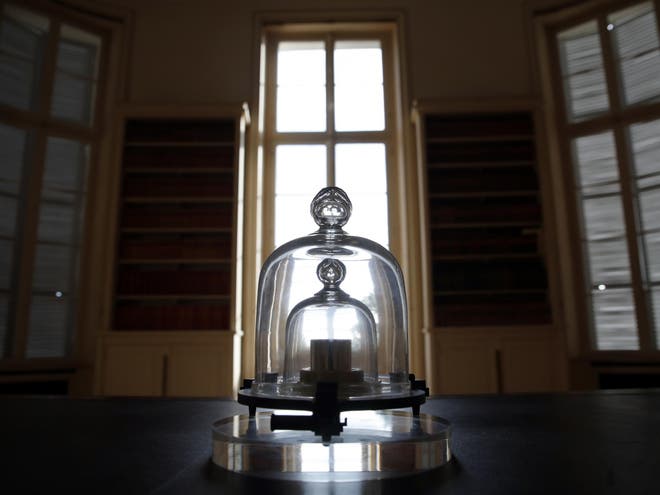 For over a century, a kilogram has been defined by a lump of metal held securely in a Paris vault (AP)

For the first time, all the definitions will be separate from their realizations: instead of definitions becoming outdated as we find better ways to realize units, definitions will remain constant and future-proof. For example, the ampere is currently defined as “the magnetic force between two wires at a certain distance apart”, which means that it uses the realization of a measurement to define it. However, advancements like the advent of the Josephson and quantum Hall effects, have revealed better ways of realizing the ampere, making the original approach obsolete.

Defining the kilogram in terms of fundamental physical constants will ensure its long-term stability, and hence its reliability, which is at present in doubt.

What about the definitions of the other units? The definitions of the second (s), metre (m), and candela (cd), will not change, but the way the definitions are written will be revised to make them consistent in form with the new definitions for the kilogram (kg), ampere (A), kelvin (K), and mole (mol). These new wordings are also expected to be approved at the 26th CGPM in November 2018 and to come into force on 20 May 2019.

What impact does the redefinition have on the realization of the kilogram? The kilogram will be defined in terms of the Planck constant, guaranteeing long-term stability of the SI mass scale. The kilogram can then be realized by any suitable method (for example the Kibble (watt) balance or the Avogadro (X-ray crystal density) method). Users will be able to obtain traceability to the SI from the same sources used at present (the BIPM, national metrology institutes and accredited laboratories). International comparisons will ensure their consistency.

The value of the Planck constant will be chosen to ensure that there will be no change in the SI kilogram at the time of redefinition. The uncertainties offered by NMIs to their calibration customers will also be broadly unaffected.

What impact does the redefinition have on the realization of the ampere? The ampere and other electrical units, as practically realized at the highest metrological level, will become fully consistent with the definitions of these units. The transition from the 1990 convention to the revised SI will result in small changes to all disseminated electrical units.

For the vast majority of measurement users, no action need be taken as the volt will change by about 0.1 parts per million and the ohm will change by even less. Practitioners working at the highest level of accuracy may need to adjust the values of their standards and review their measurement uncertainty budgets.

After the redefinition, the guidance on the practical realization of the kelvin will support its worldwide dissemination by describing primary methods for measurement of thermodynamic temperature and equally through the defined scales ITS-90 and PLTS-2000.

What impact does the redefinition have on the realization of the mole? The mole will be redefined with respect to a specified number of entities (typically atoms or molecules) and will no longer depend on the unit of mass, the kilogram. Traceability to the mole can still be established via all previously employed approaches including, but not limited to, the use of mass measurements along with tables of atomic weights and the molar mass constant Mu.

Atomic weights will be unaffected by this change in definition and Mu will still be 1 g/mol, although now with a measurement uncertainty. This uncertainty will be so small that the revised definition of the mole will not require any change to common practice.

The new definitions will use ‘the rules of nature to create the rules of measurement’ linking measurements at the atomic and quantum scales to those at the macroscopic level. As science and technology progress, the demands for measurements to underpin new products and services will increase. Metrology is a dynamic branch of science and the steps taken by the BIPM and the wider metrology community to advance the SI in 2018 will underpin these requirements ensuring that scientists can study it and engineers can improve it. And, since science and engineering play an important role in our lives, measurement matters for everyone.