Once again Joe Public comes out smarter than politically correct opinion surveyors, fact checkers and journalists.  The latest evidence of elite blindness comes from a smart-alecky reporter writing at GlobalNews Survey says Canadians think Earth beat its heat record in only 10 of the last 18 years. They’re wrong Excerpts in italics with my bolds.

It’s an annual international survey conducted in 37 countries that looks at whether respondents have accurate, or inaccurate ideas about major issues.

This one ranked Canada 11th out of 37 countries when it came to accurate understandings of major issues.

One area of misunderstanding — climate change.

It also found that Canadians are overestimating the share of energy that they consume from renewable resources.

I’ll save the renewables issue for another day. (See Exaggerating  Green Energy Supply) This post will show the reporter’s dog ate his homework, because there are large holes in his information.  He didn’t do professional due diligence so I will investigate to put the record straight for him and anyone else misled by the press.

What Ipsos Asked and Thought Was the Right Answer

Q. The World Meteorological Organization collects annual global temperatures, to see whether they are rising or falling across the world. How many of the last 18 years have been the hottest for the world as a whole since they began collecting data in 1961?

Note the question context:  The World Meteorological Organization collects annual global temperatures (. . . began collecting data in 1961), to see whether they are rising or falling across the world. When you go looking for the data, WMO directs you to three datasets produced by others:  Hadcrut (UK Met Office), NOAA (US agency) and Gistemp (NASA, US agency).  So the frame serves to exclude satellite-based datasets, and limit the expected answer to three land+ocean products.  And as many will know, those records go back to late 1800s, far earlier than 1961.  Apparently, the surveyors wanted to put anyone off from thinking temperatures were warmer in the 1930s or 40s.

Misdirection #2  Failing to Do the Math

Getting data right now out of US federal agencies is problematic since websites are shut down.  It seems many federal employees are taking leave in order to help reduce the government deficit.  Fortunately, the Met Office has a site ( here) providing the relevant annual global temperature anomalies from the three sources. I compiled a table which makes the asked for comparisons.

Ipsos says 17 of the last 18 were the hottest. Really?  Epic Fail: That so-called “correct” answer is three times too high!  Around the world people said 9, and that’s much closer to the truth. Canadians said 10, perhaps biased higher by all the fake news around.

Misdirection #3  Failing to Do the Statistics

Now it may have occurred to you that some of the hotter years were not much warmer.  When you consider the 95% confidence intervals, some years fall out of the list.  For example, Hadcrut also provides each year a calculation of the upper and lower bounds on the error range, combining bias, measurement uncertainty and coverage uncertainty. 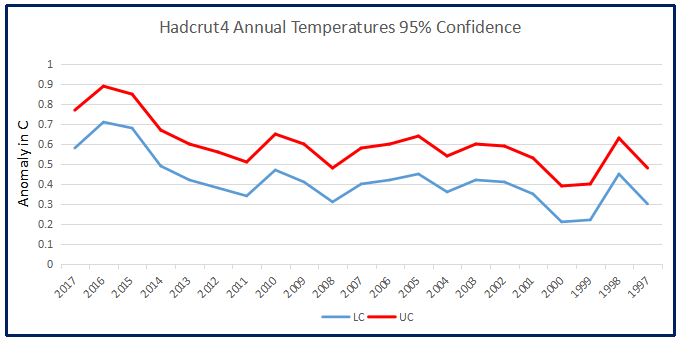 The chart shows that after considering the estimated uncertainty, it is actually the last three years that were hotter than 1998 in Hadcrut4.  The other land+ocean datasets have similar uncertainties and results (five hotter years in NOAA and GISS).

When it comes to UAH satellite dataset, we have this analysis:
University of Alabama Huntsville  Summary:
Globally, 2016 edged out 1998 by +0.02 C to become the warmest year in the 38-year satellite temperature record, according to scientists. Because the margin of error is about 0.10 C, this would technically be a statistical tie, with a higher probability that 2016 was warmer than 1998. The main difference was the extra warmth in the Northern Hemisphere in 2016 compared to 1998. Source: https://www.sciencedaily.com/releases/2017/01/170104130257.htm

No wonder they wanted UAH excluded.  And others say the confidence ranges are much larger than these estimates, which consider processing uncertainties not including errors of the instruments themselves.

Such characterizations are absurd, according to Richard Lindzen, a meteorology professor at MIT and one of the world’s foremost skeptics that global warming represents an existential threat.

“It’s typical misleading nonsense,” Lindzen said in an e-mail. “We’re talking about less than a tenth of degree with an uncertainty of about a quarter of a degree. Moreover, such small fluctuations – even if real – don’t change the fact that the trend for the past 20 years has been much less than models have predicted.”