Special Counsel Mueller is exiting the stage.  In taking his final bow, he emulated Yasser Arafat, famous for never missing an opportunity to miss an opportunity.  The editors of IBD explain how, instead of seizing the moment to do the right thing, Mueller completely failed his profession and his country.

Mueller’s Final Statement Turns Jurisprudence On Its Head. Excerpts in italics with my bolds.

Special Counsel Robert Mueller today spent 10 minutes publicly stating that his 448-page, two-part, $35 million and 22-months-in-the-making report speaks for itself, as he announced he was closing shop and retiring. In so doing, he said he couldn’t charge a sitting President with a crime, but if he could have exonerated him he would have said so.

This starkly politicizes presidential investigations going forward and indicts, if we may say so, the already-dubious system of weaponizing a lawyer with a blank check, no deadline, and an open-ended mandate for him to fish where he likes with minimal oversight. 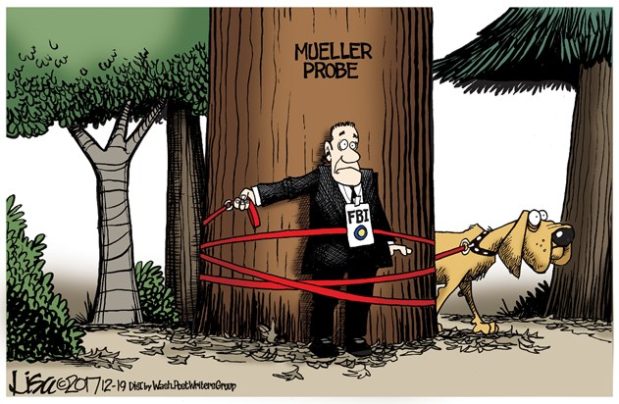 What kind of strange new standard is Mueller setting here?

Mueller had all the time and money he could want, recorded countless hours of testimony, compiled a mountain of documents, got multiple plea deals, chased down out every conceivable lead, and then says he couldn’t prove the president didn’t commit a crime.

Since when is the job of prosecutors to determine innocence beyond a reasonable doubt? And, short of that, feel free to dump all the evidence that didn’t lead to a criminal charge, but that makes the defendant look a suspect nonetheless.

How would the average American citizen like this said of him or her after a couple of years of 18 prosecutors scrutinizing his or her affairs? After reviewing all the evidence, we don’t have enough evidence to say that John Doe robbed that store. But we can’t say definitively that he didn’t rob that store, so here’s a bunch of embarrassing revelations about him that we uncovered along the way. Have fun.

When the Mueller report came out, I&I’s Tom McArdle noted “that in the United States, we don’t let prosecutors publicly blemish the reputations of law-abiding citizens for actions that fall short of criminality. At least we didn’t until special counsel Robert Mueller.”

A prosecutor’s job is — or at least used to be — to charge or not charge, not choose this or that shade of gray.

Mueller compounds this error with an equally nonsensical claim that he’s somehow protecting Trump. Mueller says the only reason he didn’t bring criminal charges against Trump for obstruction was because the President can’t be charged with a crime while serving in office.

“It would be unfair,” he said in his statement, “to potentially accuse somebody of a crime when there can be no court resolution of the actual charge.”

But what Mueller has done is worse. He’s left the public with the impression that Trump is — nudge, nudge, wink, wink — guilty of something, even if Mueller can’t say what exactly it is. And in doing so, he’s laying the groundwork for Democrats to impeach Trump, without ever having to actually accuse Trump of anything. How exactly is that fair?

Ex-terrorism prosecutor Andrew McCarthy of National Review noted earlier this month that Mueller had options if he actually thought Trump had committed a crime. If there were a case against Trump, he says, “then it is the prosecutor’s job to recommend indictment. The question of whether the (Office of Legal Counsel) guidance should then be invoked to delay indictment should then be up to the attorney general. The guidance should not burden the prosecutor’s analysis of whether there is an indictable case. Yet Mueller chose not to see it that way.”

Mueller’s dark hints of wrongdoing will no doubt add fuel to the Democrats’ longstanding desire to start impeachment proceedings.

In the wake of what will go down as the most outrageous curtain call in the history of political Washington, it is now hard to explain his report and his concluding statement in any way other than impeachment having been Robert Mueller’s design all along.

We have reached the logical conclusion of identity politics:  Trump is guilty of being Trump.  That’s that, and that’s enough.  The tribe has spoken.