By Ronald W. Opsahl writes August 26, 2019, at Real Clear Policy Trump’s Environmental Reforms: Good for the Environment, Bad for Lawyers.  Excerpts in italics with my bolds.

Between 2016 and 2018, environmental groups filed over 170 lawsuits alleging violations of the Endangered Species Act, making the ESA one of the most abused environmental laws in the United States. On Monday, the Trump Administration announced much needed revisions to regulations of the ESA.

The response of leading environmentalist groups was entirely predictable. They immediately threatened lawsuits. Indeed, lawsuits make up the core business plan of many purported wildlife conservation groups. They sue the U.S. Fish and Wildlife Service (FWS) for alleged violations of the ESA, and often force agency decisions that do not actually benefit any species.

These groups then seek, and frequently succeed, to recover their attorneys’ fees from the federal government, drawing limited funding away from actual species conservation and into their war chests to fund additional ESA litigation. And the cycle goes on and on.

Major environmentalist groups not only earn money directly from litigation, but they also use lawsuits as a fundraising tool, rallying their donors by claiming to “fight” for endangered and threatened species in the courts, even when those lawsuits do little to promote actual conservation.

Big Environmentalism is doing brisk business these days. Since these groups essentially earn a living by abusing the ESA, they have a lot invested in the status quo. ESA reform is a genuine threat to their business model. They characterized Trump’s proposed reforms as a rollback of protections for species at risk of extinction, but it is actually a rollback of their lucrative legal work that terrifies them.

The Trump Administration is proposing three main changes. The change attracting the greatest criticism involves presenting the public with the economic impacts of listing decisions. It is true that listing decisions under the ESA are supposed to be based upon scientific evidence, without regard to economic impact. However, there is no prohibition on preparing and disclosing the potential economic impacts that would result from listing a species. In fact, officials are required by law to consider economic impacts whenever they designate a critical habitat for a species.

Environmentalists may want to keep the public blind to economic impacts, but that could hardly be said to be in the public’s interest. Too often, environmentalists seek critical habitat designations under the pretense of conserving species, but in fact their true intent is to prevent any resource development.

A second revision raising environmentalist ire is the elimination of its so-called “blanket rule,” which automatically affords threatened species the same protections granted to endangered species. Instead, going forward, FWS will evaluate the threats to newly listed threatened species, and tailor the conservation measures to each species’ needs.

Tailored conservation is smarter conservation. The National Marine Fisheries Service, the federal agency responsible for protecting marine species under the ESA, has never employed the “blanket rule” and has always tailored protections to species’ needs. Furthermore, the “blanket rule” is not provided for by the text of the ESA. Thus, the proposed changes would bring the government’s application of the ESA back into alignment with the Congress’ actual intent.

A third proposed revision to the regulations would clear up some disputed language in the law. Under the ESA, a species may be listed as threatened if it is at risk of becoming endangered in the “foreseeable future.” Previously, the term was undefined, leading to numerous lawsuits intended to force the agency to list species as threatened based upon little more than speculation.

Unfortunately, the weaponization of the ESA will continue until the law is fundamentally changed to eliminate the big dollar incentives that lead to endless litigation in the name of “species conservation.” More reform is needed to curb the rampant abuses of the law by environmental groups. Until then, the “sue and settle” approach will continue clogging up the courts, consuming vast federal resources in endless lawsuits, and taking those resources away from the real work of conservation.

Nevertheless, the proposed reforms are a step in the right direction. The Trump Administration’s ESA rule revision takes power out of the hands of lawyers and puts it back in the hands of scientists and trained wildlife management officials—where it belongs.

Ronald W. Opsahl is an attorney with Mountain States Legal Foundation, specializing in natural resources law, and is a trained wildlife biologist. 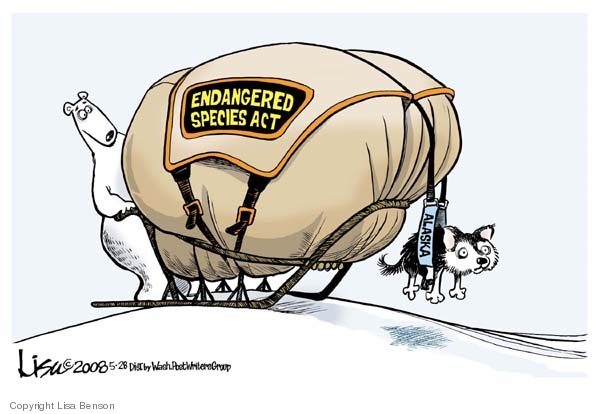