At the New Criterion James Piereson explains in his article Breaking the wrong ground. Using impeachment as an election strategy is only the latest breaking of political norms that kept the US functional in the past

With the impeachment charade in mind, it is useful to review the various political and constitutional “norms” that have been blasted away in recent decades, mostly due to hyper-partisan conduct by Democrats, with encouragement and cover from the mainstream media.

First: It now appears that a president will never again be able to appoint a justice to the Supreme Court or judges to lower level federal courts, unless he or she has a partisan majority in the Senate.

That is a new development, brought into being by no-holds-barred campaigns against Robert Bork, Clarence Thomas, Brett Kavanaugh, and many nominees for judgeships on lower federal courts. Democrats routinely vote in unison against Republican nominees; that is not reciprocally true, or at least has not been true until recently. For example, Justice Scalia (appointed by President Reagan) was confirmed by a vote of 98 to 0 in 1986, while Justices Ginsburg and Breyer, nominated by President Clinton in 1993 and 1994, were confirmed by votes of 97 to 3 and 87 to 9 (respectively). Those kinds of consensual votes for justices and judges are unlikely to happen again anytime soon—and are in fact beyond the realm of possibility in the current environment. Democrats signaled last year prior to the 2018 elections that they would block all judicial confirmations if they won a majority of seats in the Senate. Republicans, as it happened, maintained the majority, and have proceeded to confirm justices and judges, with little or no support from Democratic members. We are bound to reach a point when the number of justices on the Supreme Court actually shrinks, because agreement cannot be reached to appoint new justices when incumbents retire or die.

Second, it further appears that a president cannot even confirm a cabinet unless he or she has a partisan majority in the Senate.

Democrats established this precedent by voting in unison against President Trump’s cabinet nominees, with the exception of Secretary of Defense Mattis, who won a near-unanimous vote. Democrats in the Senate voted almost unanimously against Jeff Sessions (Attorney General), Mike Pompeo (Director of Central Intelligence), Rex Tillerson (Secretary of State), Betsy DeVos (Education), Steven Mnuchin (Treasury), Mike Mulvaney (Office of Management and Budget), and Scott Pruitt (Environmental Protection Agency). William Barr was subsequently confirmed as Attorney General in 2019 by a vote of 54 to 45, with but four Democrats voting in his favor. If Republicans did not have a majority, they would not have been able to confirm any of President Trump’s nominations (with the exception of Gen. Mattis).

What do Democrats think is going to happen when they elect a president, but fail to carry a majority in the Senate? Republicans will undoubtedly behave in that situation just as Democrats have acted in relation to President Trump: they will veto his cabinet nominations, or delay them indefinitely to keep the incumbent president from forming a working government. That, after all, is what Democrats hoped to do to President Trump—and they are still doing it. Turnabout is fair play, and in politics is often necessary to deter adversaries from “upping the ante” by adopting more extreme tactics of attack. Looking ahead, there is little chance, for example, that Republicans will vote in the future to confirm a Democratic nominee for Attorney General, just as Democrats tried to block Sessions and Barr (and John Ashcroft and Alberto Gonzales before them). By contrast, Eric Holder, President Obama’s nominee for Attorney General, and a highly partisan figure, was confirmed by a comfortable bi-partisan vote.

It is unlikely that Republicans will be quite so generous in regard to future nominations for Attorney General, in view of the manner in which Democrats treated Sessions and Barr. That will be the case also in regard to other sensitive policymaking positions—such as the head of the epa or director of the cia.

In this way the United States is moving toward a bastardized form of parliamentary government, in that the President must have a majority in the Senate to conduct the business of government and the other party is no longer the opposition party (putting forth alternative policies) but is rather the “obstructionist” party.

Third, it also appears that there is no longer any realistic way to curb government spending without risking a government shutdown.

Neither party wishes to face this, especially Republicans, who have been routinely blamed for shutdowns by Democrats and the mainstream media. It may be possible to constrain federal spending with a unified government, but that would require sixty votes in the Senate, which neither party is likely to win anytime soon. Thus, as a consequence of party warfare, the spending will continue, the debt and deficits will accumulate, until there is a crisis of some kind involving inflation, interest rates, the depreciation of the dollar, or some such event that will require decisive action in response, albeit in an environment of distrust and dissensus that will make any such response difficult to carry out. In this way hyper-partisan government equals irresponsible government. 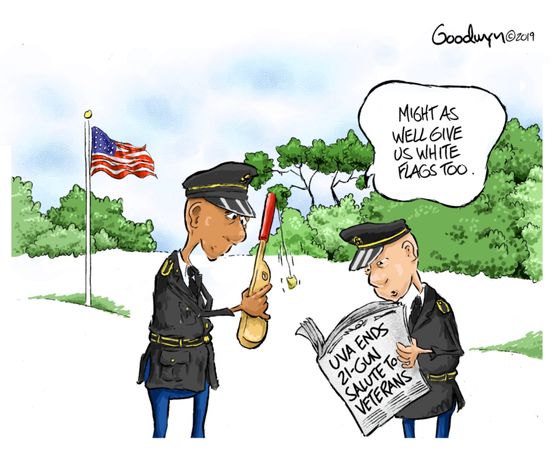 Fourth, in international affairs, it is going to be difficult in the future for the United States to mount the kinds of costly interventions carried out in Afghanistan and Iraq.

A fair amount of bi-partisan consensus is required to launch such operations, much less to continue them under difficult circumstances. The United States once built a rough bi-partisan consensus on its international role in the early years of the Cold War. It is probably fortunate that the Soviet Union collapsed when it did, because political agreement in the United States over the Cold War was bound to collapse sooner or later. Today, however, any intervention launched by one party will be immediately opposed by the other; and when things become difficult in a theater of conflict, the opposition party will exploit it for electoral gain. Any future president, aware of such political risks, will understand that it would be foolhardy to embark on any such international venture. Through this process the United States will gradually withdraw from the prominent international role it played during the Cold War and subsequent decades. The wider world will come to understand this—they will understand that President Trump is not an aberration but a harbinger of things to come—and will begin to make independent arrangements to protect their security. That might be a good thing; on the other hand, it will probably make for a more unstable world. 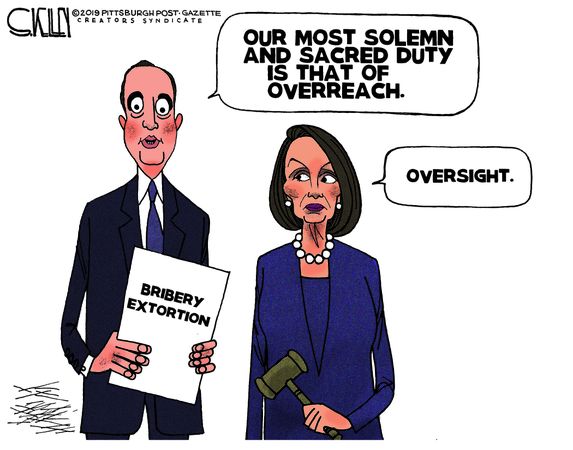 Fifth, and finally, Democrats have now turned impeachment into a partisan electoral strategy which, if successful, will establish a precedent for future investigations to come.

This is the kind of stratagem that is bound to come back to haunt Democrats whenever they elect a president and do not have a majority in the House of Representatives. What is to stop Republicans from impeaching an incumbent Democrat on a partisan vote in the hope that it will strengthen the hand of the Republican candidate in a forthcoming election? This is, in effect, what Democrats are proposing to do today. Democrats assume Republicans would never do such a thing. They are wrong. Impeachment, far from being rare, is about to become a commonplace event as an instrument of campaign strategy and partisan warfare. Every president going forward, when facing a hostile Congress, will face the threat of impeachment, since Democrats are proving today that it is not difficult to concoct a case if there is a determination to find one. In that situation, Americans might as well forget about Washington as a place where important problems are addressed on behalf of the public.

There are, of course, other “norms” Democrats wish to cast aside.

Some have said, for example, that they want to pack the Supreme Court or impeach Justice Kavanaugh or get rid of the Electoral College along with the equal representation of states in the U.S. Senate (guaranteed by the Constitution, a minor impediment in their view). There are others who say we should trim back the First Amendment to provide protection only for Democrats and progressives—all other speech being defined out of order as “hate” speech. Presidential candidates have said they want to abolish the country’s southern border while eliminating agencies charged with enforcing immigrations laws. They have said that unauthorized immigrants should receive free health care courtesy of the American taxpayer.

They would ban fossil fuels, mandate electric cars, and reorganize the U.S. economy on a “cave man” theory—to wit, the idea that a complex economy, in which every member carries in his or her pocket a sophisticated electrical appliance and communicates and receives information via other such appliances, can run on the basis of wind and solar power.

They have said, via their conduct, that it is no longer necessary for Americans to accept the results of elections, and that they can be contested long after they are over and an official verdict certified. They accuse President Trump of breaking norms, but this truly is norm-breaking on a breathtaking scale. 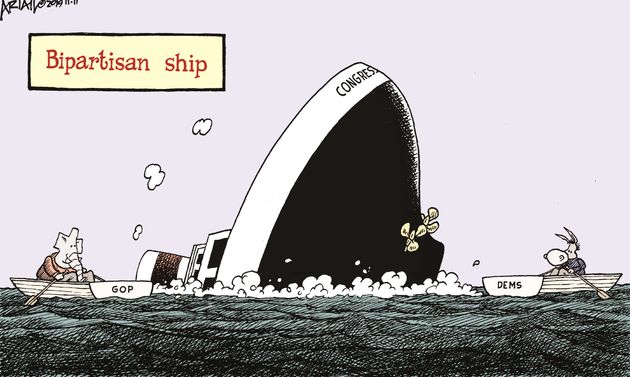 The U.S. political system is heading at breakneck speed toward some kind of crisis in which partisan warfare overwhelms the capacity of the president and congress to address national problems, as they once used to do in an era of greater national consensus. Judicial and cabinet appointments, the budget, international interests, and now impeachment have been turned into occasions for party warfare. It appears that today the two parties represent different countries, rather than different coalitions of Americans, and thus must negotiate with one another as heads of state negotiate with adversary nations. The constitutional system, with its separation of powers and layers of government, requires a fair amount of consensus to operate, because minorities are given levers by which they can block policies from being enacted or implemented. With that consensus now gone, that order is step by step coming undone. It is anyone’s guess where and how it will end.