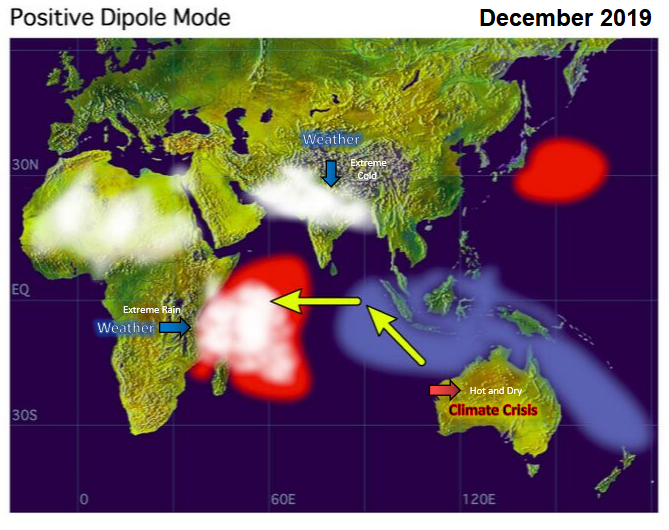 Vijay Jayaraj explains how weather is created around the Indian Ocean in this article Record Heat and Cold Expose Climate Alarmists’ Bias. Excerpts in italics with my bolds and images.

Australia was literally on fire in December. Record heat made headlines in global media. So did the extreme rainfall in east Africa.

You and everybody else on earth can guess what climate alarmists blamed for both: man-made global warming, a.k.a. climate change.

But record cold in northern India at the same time didn’t make headlines in any major media in the United States or the United Kingdom.

Why? Because it didn’t fit expectations.

Climate alarmists predictably claimed these weather events for their propaganda.  Almost all news article about the Australian heat and wildfires ultimately blamed man-made climate change. But more than four-fifths of Australia’s wildfires were caused by arson, not climate change.

And what caused the extreme hot weather was not global warming but a phenomenon called Positive Indian Ocean Dipole (PIOD).

PIOD is a seasonal weather phenomenon that can affect climate in east Africa, south Asia, and Australia all at once.

The same PIOD that caused Australia’s heat (but not its wildfires) caused the year-end floods in east Africa. It also caused extreme cold in northern India in the same month. Largely underreported in global media, the cold continued right through to the end of December.

On December 28, the heart of Delhi recorded a minimum of 1.7˚C (35˚F). The temperature likely reached freezing outside the city’s urban heat island effect. The cold wave impacted everyday life for 29 million people in Delhi.

But neither CNN nor BBC headlines ever mentioned it. It runs contrary to their narrative. Winters are supposed to become warmer. Though the mainstream media do link the PIOD to the Australian heat and the east African floods, they never shy away from blaming man-made climate change and find ways to link both.

This is what happens when people read every weather event through the preconceived lenses of climate alarmism.

Closer inspection reveals no change in very hot days in Australia since World War I. So hot weather (short term) and hot climate (long term) have nothing to do with the wildfire outbreak.

December’s extremes — heat in Australia, flooding in east Africa, cold in India — all were caused by a strong PIOD, not climate change.

These weather events neither prove nor disprove man-made climate change. But they do expose the bias of climate alarmists who blame them on man-made global warming.

Vijay Jayaraj (M.Sc., Environmental Science, University of East Anglia, England) is a research contributor for the Cornwall Alliance for the Stewardship of Creation.

The real tragedy is that Australian officials keep obsessing over their bogus climate models instead taking seriously real world weather warnings. It is not like they had no advance notice; this was published May 16, 2019, which should have triggered major efforts to reduce the fuel load long before summer.

Cool seas off WA’s north-west could kick off a climatic phenomenon that may exacerbate a winter drought across central and southern Australia.