A previous post noted the Pacific ice see saw had returned, with Bering Sea slow to recover.  The image above shows that now both Pacific seas are recovering ice strongly in the second half of January 2020. As supported by the table later, the pace of refreezing was slow to begin but 2020 extents are now quite ordinary and tracking the 13 year average (2007 to 2019 inclusive). Okhotsk Sea on the left has steadily grown 250k km2 ice extent to be currently at 68% of last March maximum.  Bering on the right added 170k km2 and now exceeds last March max by 3%.

On the Atlantic side there has also been some ice growth on the margins.  Notably Barents Sea on the right has added 160k km2 to exceed its average by 40%, and is now 95% of last March max.  Also visible on the upper left is ice forming in the Gulf of St. Lawrence and Baffin Bay ice slowly extending south. The graph below shows the ice extent growing during January compared to some other years and the 13 year average (2007 to 2019 inclusive).

Note that the  NH ice extent 13 year average increases about 1.2M km2 during January, up to 14.4M km2. MASIE 2020 stated with a slower icing rate, dropping 300k km2 lower than average before catching up to reaching the average on January 19 and tracking closely since.  Other years were lower at this point, while MASIE and SII 2020 are showing nearly the same extents.

The table shows where the ice is distributed compared to average.  Deficits in Greenland Sea and Baffin Bay are offset by a 230k km2 surplus of Barents Sea ice.  At this point the surplus in Okhotsk exceeds the Bering deficit.

Footnote:  Interesting comments on January 13 by Dr. Judah Cohen at his blog regarding the Arctic fluctuations. Excerpts in italics with my bolds.

The positive AO is conducive to sea ice growth and Arctic sea ice growth rate continues to grow slowly and remains well below normal but higher than recent winters; the weather pattern remains favorable for further sea ice growth. Negative sea ice anomalies exist in three regions: the Bering Sea, around Greenland-Canadian Archipelagos and Barents-Kara Seas. The anomalies in the North Pacific sector have shrunk (Figure 16), and based on model forecasts negative sea ice anomalies in the Bering Sea can shrink further in the next two weeks. Below normal sea ice in and around Greenland and the Canadian Archipelagos may favor a negative winter NAO, though there are no signs of such a scenario. Based on recent research low sea ice anomalies in the Chukchi and Bering seas favors cold temperatures in central and eastern North America while low sea ice in the Barents-Kara seas favor cold temperatures in Central and East Asia, however this topic remains controversial. Recent research has shown that regional anomalies that are most highly correlated with the strength of the stratospheric PV are across the Barents-Kara seas region where low Arctic sea ice favors a weaker winter PV. 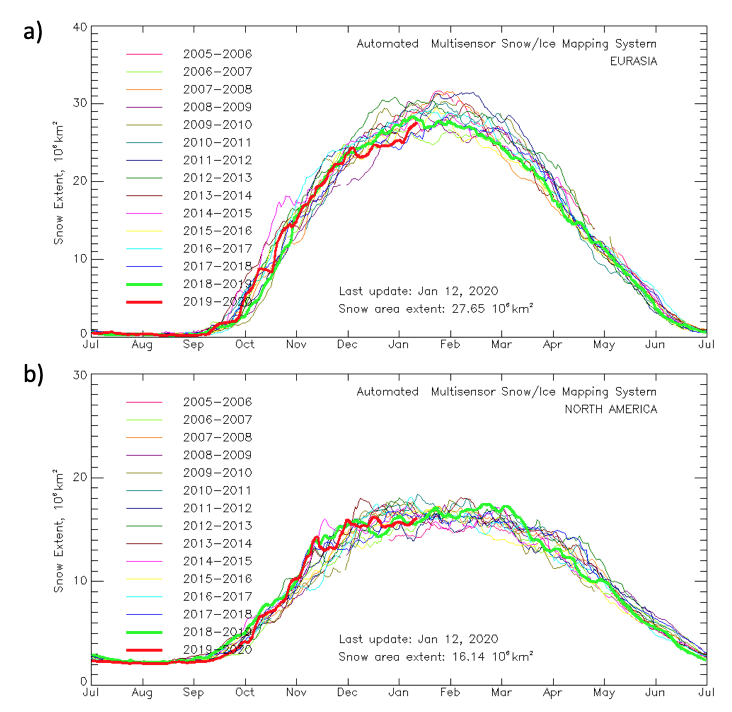 Despite a strongly postive AO snow cover has advanced across Eurasia and is now near decadal means. And if the snowfall forecasts for Europe ever verify it could advance further. Above normal snow cover extent in October, favors a strengthened Siberian high, cold temperatures across northern Eurasia and a weakened polar vortex/negative AO this upcoming winter followed by cold temperatures across the continents of the NH.