Lafayette Park, also known as Presidents Park or Lafayette Square, is a seven-acre public park located across from the White House in Washington, D.C. The green space provides an arena for public protests, ranger programs, and special events.

When the park, as Lafayette Square, was first established it was to be used to enhance the grounds of the White House. Through the years it is said it has been used as a race track, a graveyard, a zoo, and a camp for soldiers during the War of 1812.

The park, bounded by Jackson Place on the west, Madison Place on the east, and Pennsylvania Avenue, is now a popular site for those who want to take photographs of the White House. The park is home to five statues, four honoring foreign Revolutionary War heroes and one of President Andrew Jackson. 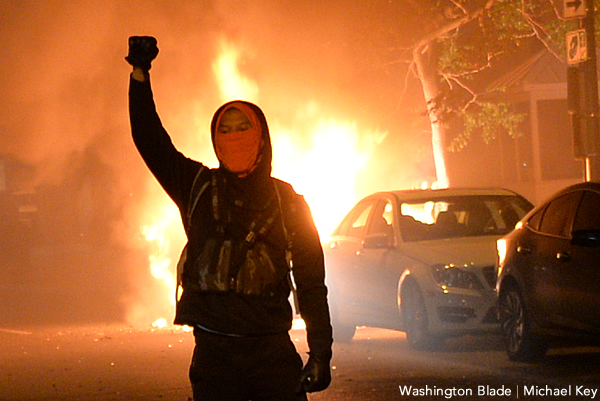 But Lafayette Park was attacked and vandalized Sunday night, as reported by the Washington Blade Damage, looting as D.C. protesters ignore curfew.  Excerpts in italics with my bolds.

Similar to the D.C. protests that unfolded on Friday, May 29, and Saturday, May 30, the Sunday protests joined by about 1,000 people began peacefully at the site of the White House and Lafayette Park earlier in the day.

But shortly after nightfall when police blocked access to the White House area the protesters scattered into smaller groups and marched through downtown streets. Some of them wielded metal baseball bats to smash windows and glass doors of stores and office buildings, according to media reports.

Some of those engaging in vandalism, whom D.C. police and Bowser have said appear to be radical agitators who do not share the goals of protesting the death in Minneapolis of George Floyd, set fires inside the buildings they broke into.

Among the buildings partially damaged by fire was the historic St. John’s Episcopal Church located across the street from Lafayette Park near the White House known as the Church of the Presidents. Also set on fire was the lobby of the AFL-CIO building two blocks away at 815 16th Street, N.W.

According to local TV news reports, it took D.C. police and fire department personnel close to an hour to arrive on the scene to clear away protesters and begin putting out the fires at the church and the AFL-CIO building.

In an announcement on Sunday night, D.C. police released the names of 18 people they said police arrested for felony rioting related acts mostly on Saturday, May 30. TV news reporters on the scene of the disturbances on Sunday night reported additional arrests, but police didn’t immediately disclose the number of arrests on Sunday and early Monday morning. On the green of Lafayette Park is St. John’s Episcopal Church, a short walk away. Often called the “Church of Presidents,” the building sustained damage in a fire after protests on Saturday night. Every president since Madison has at least visited the church, though the last two who regularly attended services there were George H.W. Bush and Franklin Roosevelt. On the morning of his 2017 inauguration, Trump attended the service at St. John, where a pastor who campaigned for him delivered a sermon centered on how strong leaders don’t get distracted.

Just after 10 p.m. on Sunday, someone set a fire in the basement of the parish hall, which firefighters quickly extinguished, The Washington Post reported. The fire was contained to a nursery room, although there was smoke and water damage to other areas of the basement, according to the Rev. Rob Fisher, the church’s rector.

Fisher told Episcopal News Service that the nursery room is “completely destroyed,” but it could have been much worse. Nobody was hurt and none of the church’s “irreplaceable” historical items were damaged, he said in an interview.

President Donald Trump addressed the nation from the Rose Garden around 6:30 p.m., where he said he was taking “swift and decisive” action and dispatching “thousands and thousands” of military personnel and law enforcement.

As Trump spoke, explosions could be heard in the background.

“What happened in the city last night was a total disgrace,” Trump said, later adding “Our 7 o’clock curfew will be strictly enforced. Those who threaten innocent life and property will be arrested, detained, and prosecuted to the fullest extent of the law.”

As law enforcement cleared out the area around the White House, Trump walked across the street after his address for a photo op at St. John’s Episcopal Church, which briefly suffered a fire Sunday night. Every president since James Madison has visited the more than 200-year-old church. 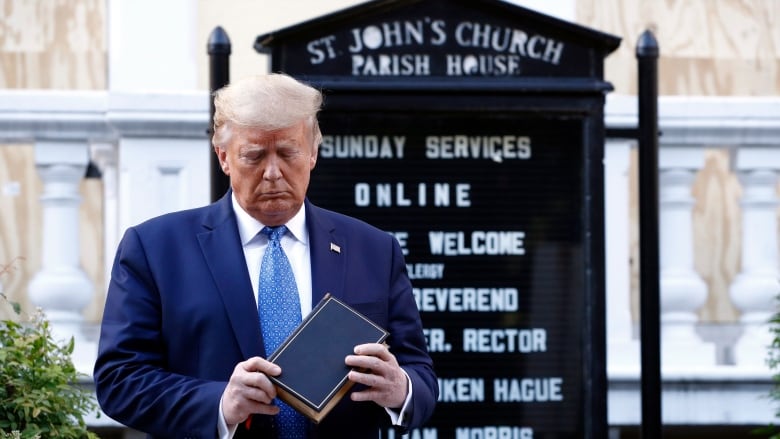 By Tuesday night, nearly every conceivable law enforcement agency was stationed in the District. Images of the National Guard positioned on the steps of the Lincoln Memorial and looming over protesters below seemed destined to become iconic. At the start of the night, people handed out goggles and helmets to fellow protesters.The crowd near the White House appeared to grow to its biggest size in five consecutive nights of large demonstrations in the District.

Yet as the District girded for a fifth night of violent clashes, there was instead overwhelming calm.

Protesters looped throughout the city — walking up to U Street, passing under the Convention Center, marching through Dupont Circle, chanting on K Street, passing long lines of voters at polling stations, returning to the area around the White House — for hours after the District’s 7 p.m. curfew went into effect. Demonstrators were trailed at times by Metropolitan Police Department officers on bicycles, but law enforcement didn’t try to stop the peaceful demonstrations.

What Do We Learn from the Battle of Lafayette Park?

Mollie Hemingway explains at The Federalist Media Falsely Claimed Violent Riots Were Peaceful And That Tear Gas Was Used Against Rioters.  Excerpts in italics with my bolds.

Following days of violent riots and looting in cities across the country, Washington, D.C., announced a 7 p.m. curfew on Monday night. About the same time, President Donald Trump addressed the nation from the Rose Garden. Afterward, he walked through Lafayette Park to St. John’s Episcopal Church, which rioters had set on fire the night before. Standing before the church sign, which reads “All are welcome,” President Trump, who previously said he’d be paying his respects to a very special place, held up a Bible.

The speech announcing the country would return to rule of law and protection of civil liberties, the walk through a park that the night before had been given over to rioters, and the visit to the vandalized historic church where every president has worshiped since James Madison, were reassuring to many in the country.

For the media, however, these actions were further proof that Orange Man Bad is literally the worst, restoring rule of law is criminal, and standing in front of a church holding a Bible is an assault on the American conscience. They focused on how the Park Police had cleared the area ahead of the city-wide curfew declared by D.C. Mayor Muriel Bowser. 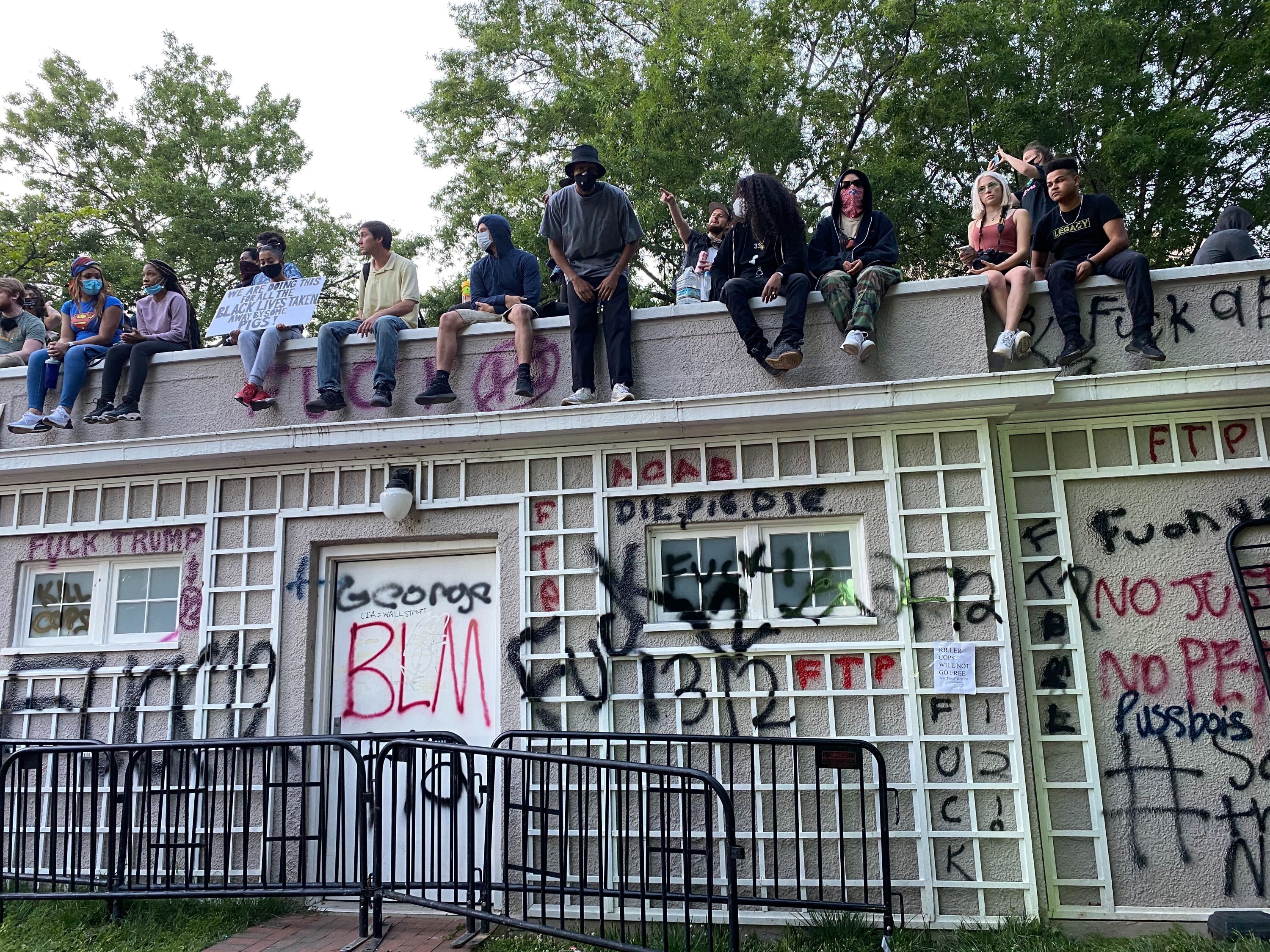 After thousands of false tweets, print stories, and broadcast stories to the contrary, local journalist Neal Augenstein of WTOP reported that a Park Police source said “tear gas was never used — instead smoke canisters were deployed, which don’t have an uncomfortable irritant in them.” Further, the source said the crowd was dispersed because of projectiles being thrown by the “peaceful protesters” at the Park Police and because “peaceful protesters” had climbed on top of a structure in Lafayette Park that had been burned the prior night.  Statement by United States Park Police acting Chief Gregory T. Monahan:

On Monday, June 1, the USPP worked with the United States Secret Service to have temporary fencing installed inside Lafayette Park. At approximately 6:33 pm, violent protestors on H Street NW began throwing projectiles including bricks, frozen water bottles and caustic liquids. The protestors also climbed onto a historic building at the north end of Lafayette Park that was destroyed by arson days prior. Intelligence had revealed calls for violence against the police, and officers found caches of glass bottles, baseball bats and metal poles hidden along the street.

To curtail the violence that was underway, the USPP, following established policy, issued three warnings over a loudspeaker to alert demonstrators on H Street to evacuate the area. Horse mounted patrol, Civil Disturbance Units and additional personnel were used to clear the area. As many of the protestors became more combative, continued to throw projectiles, and attempted to grab officers’ weapons, officers then employed the use of smoke canisters and pepper balls. No tear gas was used by USPP officers or other assisting law enforcement partners to close the area at Lafayette Park. Subsequently, the fence was installed. The entire narrative the media glommed onto in lockstep was that Trump was a monster who tear-gassed peaceful protesters to do something meaningless. None of that was true. But it took a day of reporting to get the truth out, long after the lie took hold.

At times it seems as if there is nothing that many in the media won’t lie about to accomplish their political goals.

In related news, despite or perhaps because of the media hysteria, polls show overwhelming majorities of Americans support the use of the National Guard and the military to bring peace to the cities the media claim aren’t being targeted by violent riots.

Comment:  Is anyone confused about the Battle of Lafayette Park?  The tragic death in Minneapolis was only the pretext for taking the “Resistance” to a new level.  After the Mueller Russian Hoax collapse and the stupid House Impeachment farce, the next stage is for social justice warriors to take the public square away from anyone who disagrees.  Make no mistake, this was a militant occupation to deny Trump access to the “Presidents Park” and the “Presidents Church.”  Give leftist control freaks an inch, and they will take miles, which Trump sees clearly, and so should we all.  Meanwhile the media stirs up trouble and remains lost in their bubble.