Spencer Brown reports at TownHall Biden Declares Climate Change a Pressing Issue After 48 Years in Government.  Excerpts in italics with my bolds.

Beginning with some confusion as to whose congressional district he was in, Biden said “It’s about time we step up” to confront climate change, despite his more than four decades serving in the Senate and White House that apparently failed to accomplish anything meaningful on the climate change front.

“People are beginning to realize this is much much bigger,” he explained of the weather that he says is the result of climate change before he criticized “a whole segment of our population” that he believes is denying climate change. “They don’t understand,” he added. “I think we’ve all seen even the climate skeptics are seeing” that so-called extreme weather is proof of climate change.

“Climate change poses an existential threat,” said Biden, raising his voice. “It’s here, it’s not going to get any better,” he added while insisting “we can stop it from getting worse.” If the Left’s climate agenda isn’t accomplished, Biden threatened, “the storms are gonna get worse and worse and worse.”

For his own record, then-Senator Biden voted against more stringent fuel efficiency standards a handful of times. And Biden’s words Tuesday suggest his time as Vice President in the Obama administration accomplished little to nothing. After all, if American policy could save the planet, wouldn’t eight years of Obama and Biden in the White House — which included negotiating the Paris Climate Agreement — have mitigated damage like that he spent Tuesday surveying?

“We’ve gotta listen to the scientists and economists,” Biden admonished. “They tell us this is code red.”  “The world is in peril,” Biden claimed, insisting “that’s not hyperbole.” Among Biden’s recommendations to solve the climate change he lamented is to, “by 2020, make sure all of our electricity is zero emissions,” a deadline we passed nine months ago.

“We’re here, we’re not going home until this gets done, we’re not leaving,” said Biden shortly before departing to board Air Force One to travel home to the White House.

Earlier during his Tuesday tour of damage from the remnants of Hurricane Ida, Biden was heckled by a local resident who yelled “Resign, you tyrant” as Biden walked nearby. 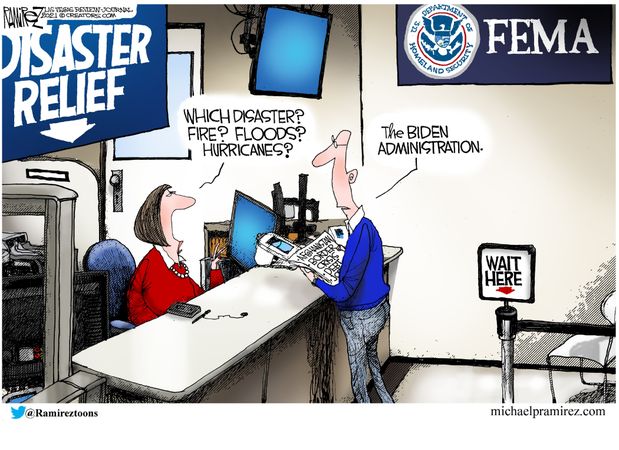