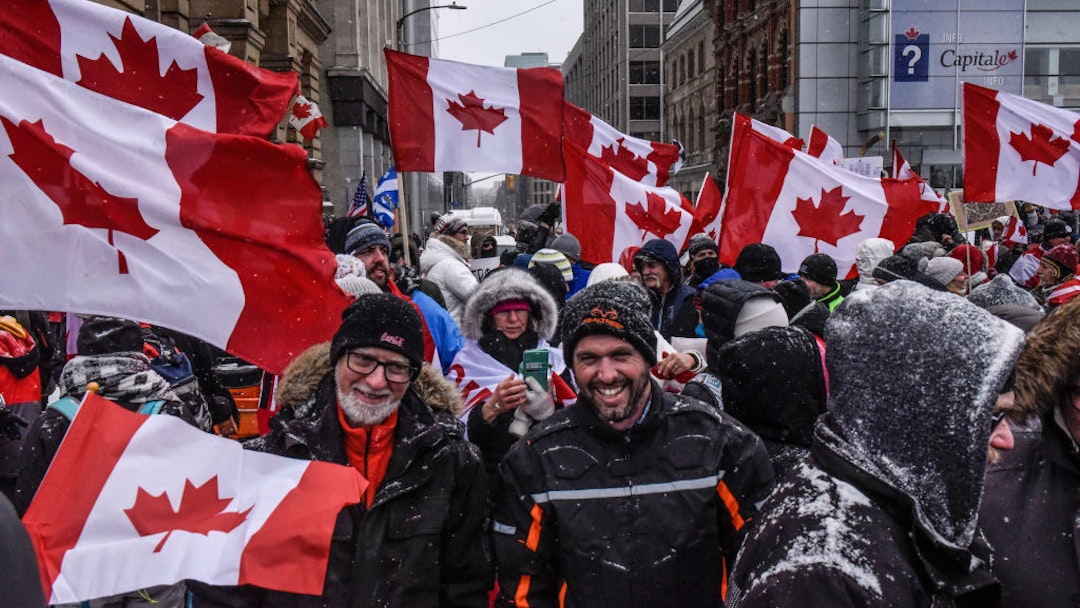 Update on the Canadian struggle to recover freedoms is at Daily Wire ‘These Very Powers … Are Why We Are Here’: Canadian Protesters ‘Dig Their Heels In’ Against Trudeau’s Crackdown.  Excerpts in italics with my bolds.

The Freedom Convoy, a loose coalition of truckers protesting vaccine mandates and other COVID-19 restrictions, rolled into Ottawa in late January and has camped downtown since. The protesters have congested parts of the city around Canada’s seat of government on Parliament Hill while demanding a loosening of COVID-19 restrictions.

So far, Trudeau has refused to meet with the truckers, instead employing increasingly hard-nosed political and legal tactics to try and break the protest.

David Paisley says he has been protesting for weeks now and, as a street captain, helps organize protesters and direct those who wish to support the cause with funds, goods, or services. Paisley told The Daily Wire that Trudeau’s announcement, which made headlines across major news organizations in the U.S. and Canada, went off barely noticed by the protesters on the ground.

“No one really cares about any new announcement. I mean the police have been breaking the law long before any emergency power. They were taking our fuel away. They were arresting people for purely having jerry cans or having empty tanks of fuel,” he said.  “They’ve already been doing these ‘emergency powers’ and all it does is make people dig their heels in more,” Paisley added.

“The irony … is that these very powers and threats are why we are here.”

Trudeau announced in a press conference Monday afternoon that he was authorizing the federal government’s use of the Emergencies Act, a law passed in the late 1980s to take the place of the War Measures Act. The act strengthens Canadian law enforcements’ ability to fine and imprison violators and ensures the operation of “essential services” such as towing rigs, Trudeau said during his press conference. It also empowers banks and financial institutions to freeze the accounts of any person or business suspected of being involved with an “illegal blockade.”

Paisley said that the protest would continue despite frozen bank accounts or impounded trucks until every protester is cuffed and thrown in prison.

“[The Trudeau government] underestimated the determination and the intelligence of those here, and so everyone still here on the ground, they’re basically willing to give their lives for this – peacefully of course,” Paisley said.

“They’re prepared to drain every last dollar, even from frozen bank accounts,” he added later.

The truckers in Ottawa have received wave after wave of support in the form of cash funds, food, fuel, letters, and even a free laundry service by two ladies who walk Paisley’s street every day collecting clothes. The trucker said he received word on Monday from two men who wanted to deliver hundreds of liters of extra diesel fuel for the convoy.

“You come and sit in the driver’s seat for a few hours and you’ll be able to fill up your wallet again. It’s incredible. People are just handing you fifties, hundreds, packs of hundreds. A friend of mine received a Bible and when he opened it up it had 500 cash inside the bible,” Paisley said.

“The more the government tries to stomp this out, the more and more it causes people to rise up and say ‘this is wrong, and I side with these truckers,’” he said. “These steps from the government have simply hardened the determination of the great men and women down here, so I’m not really concerned at all.

We’ll have lots of new friends when we all get tossed in prison together.”

The Christian crowdfunding site GiveSendGo has been hacked and temporarily disabled after it facilitated the raising of nearly $9 million for the convoy of Canadian truckers who have been protesting vaccine mandates.

The Delaware-based organization, which hosted a crowdfunding effort for the Canadian truckers after crowdfunding site GoFundMe took down their initial fundraiser at the urging of the Canadian government, was disabled Sunday night. Visitors were redirected to the domain GiveSendGone[.]wtf.

The site had raised over $8.7 million in one week after the GoFundMe effort was taken down.

GiveSendGo’s list of donors, approximately 92,000 of them, was also leaked and shared online.

The site stated on Feb. 10 in response to previous Canadian court efforts to halt the funds that the Canadian government “has absolutely ZERO jurisdiction over how we manage our funds here” and that all the donations “flow directly to the recipients of those campaigns, not least of which is The Freedom Convoy campaign.”

OK, maybe not so baby faced

Adolph got a new haircut…😂😂😂 pic.twitter.com/igGEYwIlUr