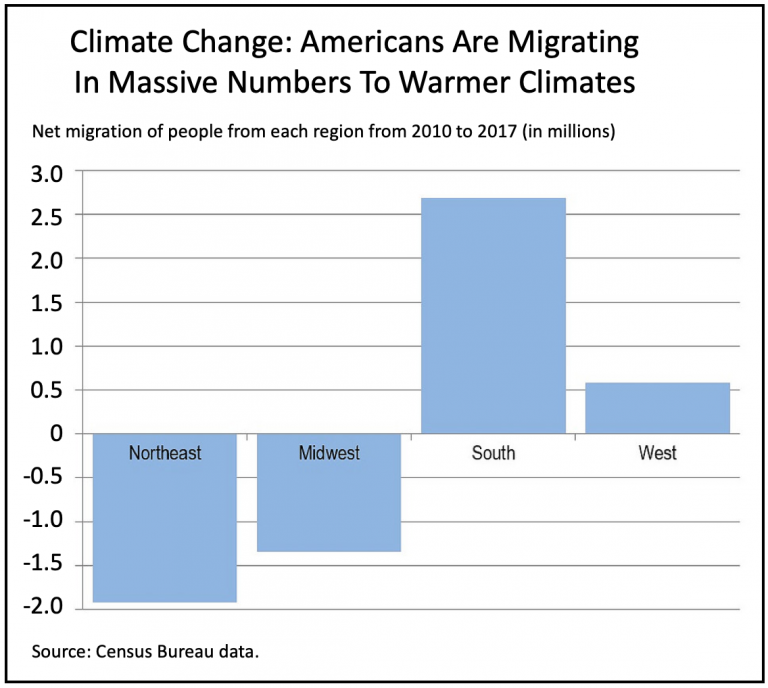 From Investors Business Daily Climate Change: Millions Of Americans Have Voted With Their Feet For A Hotter Climate.  Excerpts in italics with my bolds.

Environmentalism: A new (2018) Census report shows that this year, the hottest states in the country had the biggest gains in population. Haven’t these people been listening to decades of warnings from climate change scientists about the myriad hazards of a warmer climate?

Climate scientists have been endlessly shouting that a slightly warmer planet will unleash all sorts of terrible things — more heat-related deaths, more hurricanes and storms, more diseases, more drought and the like.  Despite these admonitions, climate change never registers as a top concern among the public.

Perhaps one reason is that Americans have been steadily migrating to hotter climates for decades. And they’re doing so despite the increased risks they face.

According to Census data, the five states with the biggest gains in population this year are, in order: Texas, Florida, California, Arizona and North Carolina. What else do these states have in common? They are among the states with the highest average temperatures in the country. And the two biggest gainers — Texas and Florida — are the first and fourth hottest states, respectively, in the nation.

Meanwhile, of the nine states that lost population this year, six are in states with below-average temperatures. The biggest loser in the country is New York, which dropped by 48,000 this year. Its climate is 7 degrees colder than the national average.

This year’s census numbers aren’t an aberration, either.

The above chart shows that over those years, the colder Northeast and Midwest have lost massive numbers of people to the warmer South and West.

Almost a third of the people who moved out of California over the past two years went to states with even higher average temperatures, census migration data show.

There’s no question that these states are more dangerous, in terms of climate-related problems, than the ones millions are fleeing.

Last year, for example, a third of the weather-related deaths occurred in just the five hottest states in the nation, according to the National Weather Service. Its data also show that states gaining in population are more prone to heat, hurricanes and floods.

More than 2.5 million people moved into hurricane-prone states like Florida, the Carolinas, Georgia, and Texas from 2010 to 2017. Florida alone had a net in-migration of more than 1 million. (Only Louisiana lost population over those years.) That’s despite constant alarms about how climate change will make hurricanes more frequent and intense.

Of course, climate isn’t the only thing motivating this mass migration. The population is also moving to states that have lower tax rates and are more business friendly. It’s these states that are creating jobs and opportunity. (Which explains why frigid North Dakota saw its population climb by 12% over those years.)

[Note: The most recent US regional migration stats from 2020 to 2021 show the same trend albeit with reduced volume of movers.  Both the NE and Midwest showed net losses to the South, totaling nearly 300,000.]

So, bottom line is: Millions of Americans have made it clear that when push comes to shove, they rank opportunity far higher than any of the supposed risks posed by climate change.

Is it any wonder that Americans are so indifferent to the constant demands by environmentalists that we must all sacrifice to prevent the planet from warning by a few degrees?