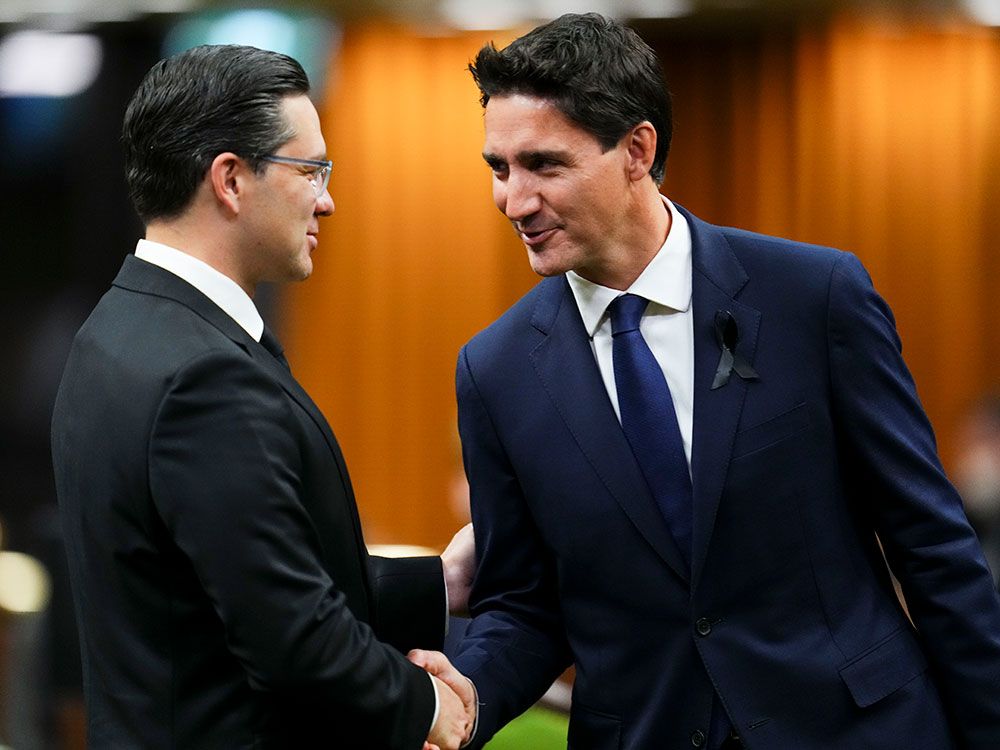 Newly elected Conservative Leader Pierre Poilievre, left, and Prime Minister Justin Trudeau greet each other as they gather in the House of Commons to pay tribute to Queen Elizabeth on Sept. 15, 2022. PHOTO BY SEAN KILPATRICK / THE CANADIAN PRESS

John Iverson reports at National Post Canada Scaremongering about Poilievre could be the only move Trudeau has left.  Excerpts in italics with my bolds and added images.

Pierre Poilievre and his team will be gratified by the first public opinion poll since he was elected Conservative leader, which gives his party a healthy five-point lead over Justin Trudeau’s Liberals.  While there was no sign of a surge in support from voters — Abacus Data has the Conservatives at 35 per cent support, up one point from its last survey — neither was there a drop in approval from Canadians queasy at some of the new leader’s more controversial rhetorical flourishes.

Trudeau set the tone for the fall parliamentary session when he “congratulated” Poilievre on his victory last week. He said Canadians need “responsible leadership,” a quality he said was lacking in a campaign that attacked “institutions that make our society fair, safe and free”; which said people could opt out of inflation by investing in cryptocurrencies; and that demeaned the vaccines “that saved millions of lives.”  Even in his address on the Queen’s death, the prime minister took a barely disguised dig at Poilievre, when he said global democratic institutions are being challenged by unnamed politicians.

It is a strategy that makes sense for a government that has little to boast about. 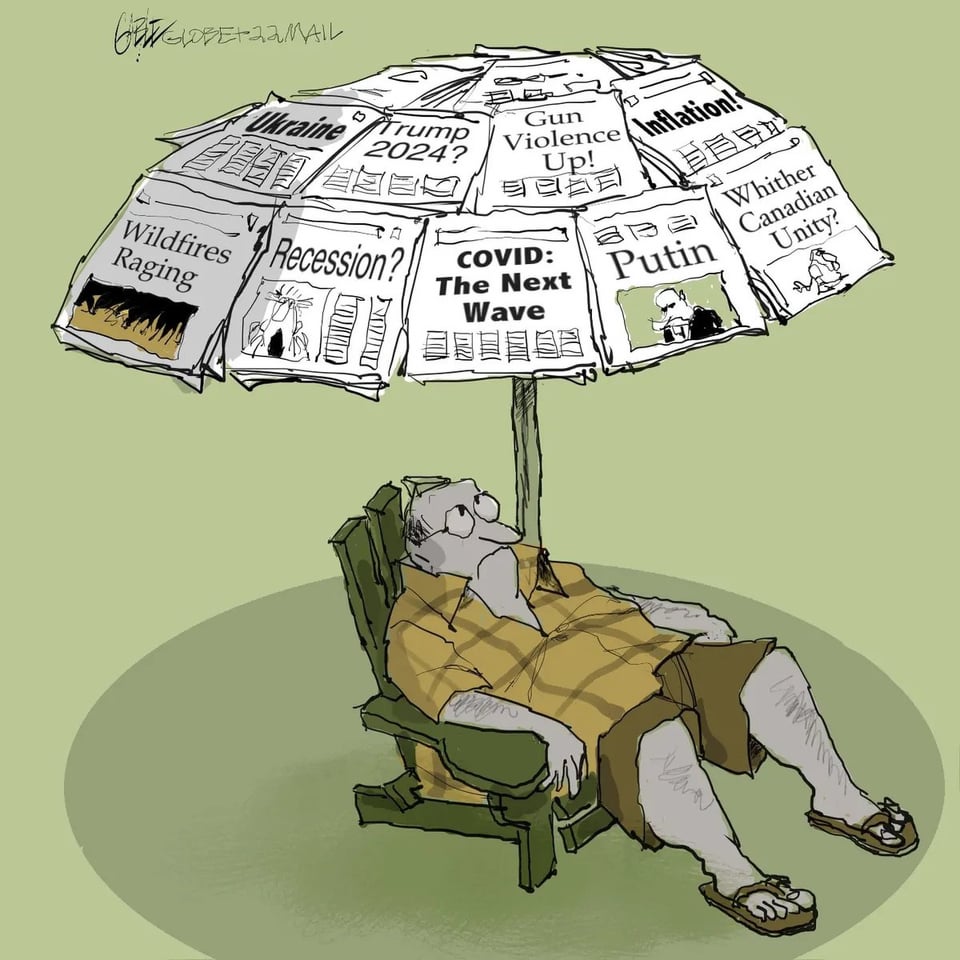 The first two groups are doing well and are happy with the status quo; the latter two feel the system is rigged against them and that they are unrepresented in power.

Poilievre has positioned himself as a disruptor who wants to overturn the status quo when it comes to climate change, pandemic politics and institutions like the Bank of Canada.  He has had huge success appealing to anxious conservatives, and apparently, some anxious progressives.

Coletto says that since he did his research more than a year ago, it is likely the number of anxious voters has grown, as inflation and interest rates have risen. Poilievre’s mission is to corral the votes of those “falling behind…who are hanging by a thread” — people who feel the future holds more threats than opportunity.

Faced with an NDP that seems more focused on identity politics than the fate of working Canadians, Poilievre may be kicking in a rotting door, particularly if he turns down the volume on less mainstream ideas like support for the trucker’s convoy.

Trudeau’s mission is to unite the majority of Canadians behind the idea that the new Conservative leader is a risk to their personal and financial security.   His problem is his own popularity deficit.
The Abacus poll shows Trudeau at near record-low approval ratings. Attacks on another politician generally only work when you are more credible than they are. If negative ads move into questionable territory, they can rebound, as happened when former prime minister Paul Martin’s team alleged that Stephen Harper wanted to increase the military’s presence in cities in 2005.
The Liberals have been in power for nearly seven years.  Trudeau’s success has been built on his own variation of populism — appealing to people’s hope and optimism by promising to provide the help and relief they need.   But it’s hard to be optimistic when the price of eggs is rising by 16 per cent a year.
Trudeau’s government is on the ropes and scaremongering about Poilievre will only work if it can address some of the economic and basic competency problems that have been plaguing it of late.

The new Conservative leader will reflect happily that if he can add a couple of points of support from Maxime Bernier’s People’s Party, he will be in majority government territory. 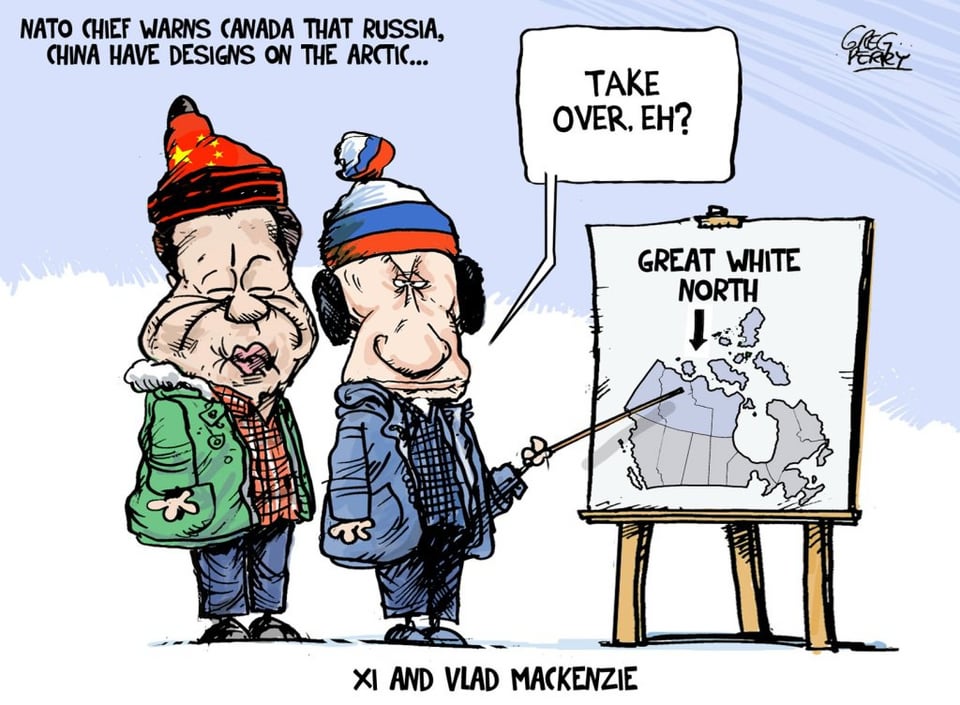