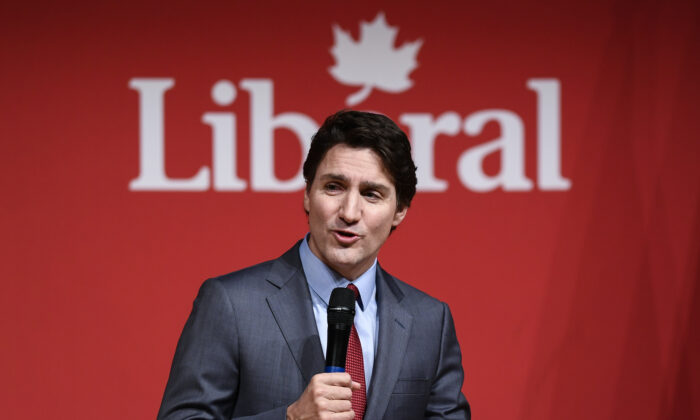 Prime Minister Justin Trudeau delivers an address at the Laurier Club Holiday Event, an event for supporters of the Liberal Party of Canada, in Gatineau, Que., on Dec. 15, 2022. (Justin Tang/The Canadian Press)

Epoch Times reports Nearly Half of Canadians Want a Federal Election in 2023: Poll.  Excerpts in italics with my bolds.

Nearly half of Canadians say they want a federal election in 2023, a new poll finds, and a slim majority indicate that Prime Minister Justin Trudeau should step down as Liberal leader in the new year.

Conducted by Ipsos on behalf of Global News, the poll shows that 49 percent of Canadians hope for a federal election next year, despite one not being legally mandated until 2025 and the NDP’s promise to keep the minority Liberal government in power so long as their “supply and confidence” agreement holds till then.

The desire for an election varies across provinces, with those living in Atlantic Canada (63 percent), Alberta (60 percent), Saskatchewan (55 percent), Manitoba (55 percent), B.C. (53 percent), and Quebec (60 percent) showing more interest than those residing in Ontario (46 percent), said the poll, released on Dec. 26.

Nationally, only 43 percent believe that a federal election will take place.

A majority of Canadians (54 percent) said Trudeau should step down as Liberal leader in 2023 and that the country should have a new prime minister, though just 27 percent believe he will do so.

This view is more widely held by men (58 percent) than women (49 percent), according to the online poll. Researchers noted a similarity in regional variation, with Alberta (65 percent) being most likely to hold this position. Atlantic Canada took the second spot at 57 percent, while Saskatchewan, Manitoba, and Ontario tied at 56 percent. B.C. followed closely behind at 54 percent whereas only 43 percent of Quebecers think Trudeau shouldn’t run in the next election.

The approval rating for Trudeau (45 percent) is higher than that of Conservative Leader Pierre Poilievre (41 percent), according to the poll.

Green Party Leader Elizabeth May, who recently returned to her role after a short hiatus, has an approval rating of 39 percent.

Yves-François Blanchet, leader of the Bloc Québécois, had the approval of 43 percent of Quebecers, while approval for People’s Party Leader Maxime Bernier was 26 percent.

“As we’ve seen in elections past with NDP leaders, they tend to do well in the polls and they don’t do so well on Election Day,” Bricker said. “So even though they might like him a little bit, they’re not necessarily prepared to vote for him unless something changes.”

Is Jordan Peterson about to lose his licence to practice psychology in Ontario? That’s what Peterson is claiming online and, so far, the College of Psychologists of Ontario (CPO) has not denied it.

Peterson took to Twitter on Tuesday to say that he was ordered to take social media training or face a disciplinary hearing.

“BREAKING: the Ontario College of Psychologists @CPOntario has demanded that I submit myself to mandatory social-media communication retraining with their experts for, among other crimes, retweeting @PierrePoilievre and criticizing @JustinTrudeau and his political allies,” Peterson tweeted Tuesday morning.

Peterson isn’t being asked to reconsider his actions towards a fellow psychologist online, he’s being asked to submit to social media training for political statements he’s made. None of the people who have lodged complaints are clients, Peterson said, nor are they connected to clients. They haven’t experienced personal harm from Peterson, but they want the good doctor to be punished.

In a series of tweets, Peterson said that many professions in Canada are now run by associations or colleges that are highly political and which impose fear on their members. He said this included physicians, lawyers, psychologists and among others.

“This means that your care and legal counsel has been rendered dangerously unreliable,” Peterson tweeted.

Canadians: your physicians, lawyers, psychologists and other professionals are now so intimidated by their commissar overlords that they fear to tell you the truth. This means that your care and legal counsel has been rendered dangerously unreliable.

There are currently about 1,300 graduates of this school, and the list of alumni includes several names of those who went on to become leaders of the health institutions of their respective nations:

How is it that more than 190 governments from all over the world ended up dealing with the COVID-19 pandemic in almost exactly the same manner, with lockdowns, mask mandates, and vaccination cards now being commonplace everywhere?   Always vaccines, never therapeutics like vitamin D, zinc, ivermectin or — like Trump suggested — HCQ.

The answer may lie in the Young Global Leaders school, which was established and managed by Klaus Schwab of the World Economic Forum, and that many of today’s prominent political and business leaders passed through on their way to the top.

The German economist, journalist, and author Ernst Wolff has revealed some facts about Schwab’s “Young Global Leaders” school … in a video from the German Corona Committee podcast.

The story begins with the World Economic Forum (WEF), which is an NGO founded by Klaus Schwab, a German economist and mechanical engineer, in Switzerland in 1971, when he was only 32. The WEF is best-known to the public for the annual conferences it holds in Davos, Switzerland each January that aim to bring together political and business leaders from around the world to discuss the problems of the day. Today, it is one of the most important networks in the world for the globalist power elite, being funded by approximately a thousand multinational corporations. …

Wolff points out that very few graduates of the Global Leaders school list it on their CVs. He says that he has only seen it listed on one: namely, that of the German economist Richard Werner, who is a known critic of the establishment. …

Another thing that the Global Leaders graduates have in common is that most of them have very sparse CVs apart from their participation in the program prior to being elevated to positions of power, which may indicate that it is their connection to Schwab’s institutions that is the decisive factor in launching their careers. This is most evident when the school’s alumni are publicly questioned about issues that they have not been instructed to talk about in advance, and their struggles to come up with answers are often quite evident. Wolff contends that their roles are only to act as mouthpieces for the talking points that those in the shadows behind them want discussed in public debate. …

Transcript of Peterson Video Above

When I look at Trudeau there’s a couple of things that I see. I see someone who hasn’t grown up. One of the most appalling things about the budget, as far as I was concerned, is that it provides ample evidence (if such was not already sufficiently provided) that Trudeau is exactly what you would be afraid of. He doesn’t have an answer to a problem that isn’t overwhelmingly predictable ideologically.

It’s like you don’t even need him, you just have to run the ideology, it has the answers. What’s the big problem: equity between men and women? I’m sorry that’s not the big problem, that’s not even scratching the surface of the problem with that approach. And your solutions? You can learn those your first week in women’s studies. They are the sorts of solutions children toy with when they have no idea what they’re contending with.  Well there’s there’s not a lot there I’m afraid.

Fixing these complex systems is unbelievably complicated and you’re likely to make them worse when you’re mucking about with them haphazardly. And so it’s way easier just to do what Trudeau said back in 2016. Why do we have women half of the cabinet? Because it’s 2016! It’s almost impossible to overstate how shallow that comment is. And not only shallow but also casually malevolent in an unconscious sense. Because he had a job to do, which was to evaluate his MPs thoroughly and skeptically and pick the best people, period. But that isn’t what he did. Instead he said: “Oh well, it’s 2016 so I’ll appoint half women.”

Everybody gave them a pass on that so here we are now. We have a budget that’s equity focused, well good luck with that.

I believe that if he had any true character that he would not have run. Because he ran on the strength of his name and he hadn’t earned the right to do that. But people elected him, and so here we are, and this is what we get. He pulled out the ideological card when he formulated the cabinet and Canadians all went: “Oh isn’t that cute.” No it’s not cute, it’s not acceptable and now we’re paying the price for it.