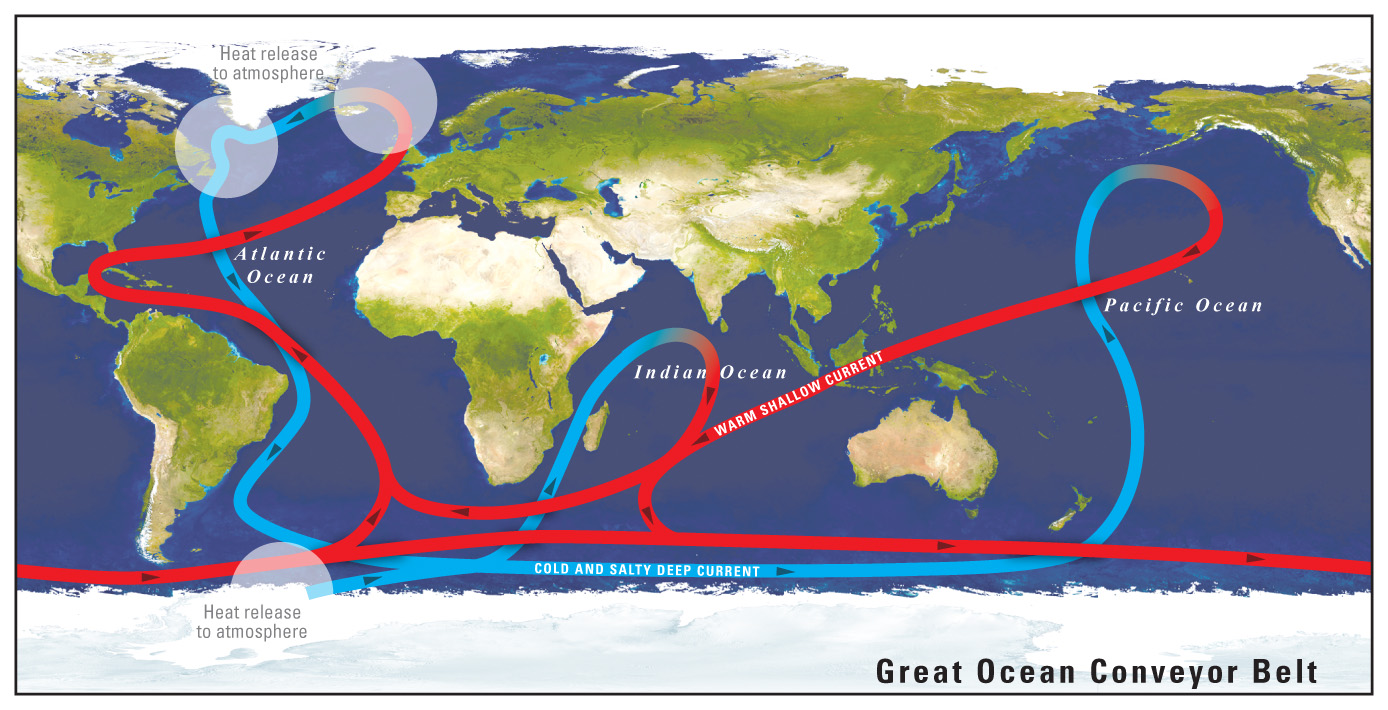 The usual suspects are sounding alarms about the ocean “conveyor belt” AMOC slowing down, and predicting that global warming will result in global cooling.

The Ocean’s Conveyor Belt Is Slowing Down: What You Need to Know About AMOC, Greenland and ‘Unprecedented’ Sea Level Rise

Using data gathered from ice cores, tree rings and coral samples, the research team (led by the Potsdam Institute for Climate Impact Research in Germany) posits that weakness in the AMOC after 1975 “is an unprecedented event in the past millennium.”

Planet Expert Michael Mann co-authored the study and told ClimateCentral that a “full-on collapse” of the AMOC could be possible in the coming decades.

The exact consequences will be difficult to predict, but it will definitely have an impact on marine life, which benefits from the nutrients the AMOC delivers up from the ocean depths. “The most productive region, in terms of availability of nutrients, is the high latitudes of the North Atlantic,” said Mann. “If we lose that, that’s a fundamental threat to our ability to continue to fish.”

Hurricanes and nor’easters like the recent Winter Storm Juno that brought Snowmageddon to the East Coast could also become more common, he warned.

“If you shut down this mode of ocean circulation, you’re denying the climate system one of its modes of heat transport,” said Mann. “if you deny it one mode of transport, it’s often the case that you will see other modes of transport increase.”

Possible changes in Atlantic meridional overturning circulation (AMOC) provide a key source of uncertainty regarding future climate change. Maps of temperature trends over the twentieth century show a conspicuous region of cooling in the northern Atlantic. Here we present multiple lines of evidence suggesting that this cooling may be due to a reduction in the AMOC over the twentieth century and particularly after 1970. Since 1990 the AMOC seems to have partly recovered. This time evolution is consistently suggested by an AMOC index based on sea surface temperatures, by the hemispheric temperature difference, by coral-based proxies and by oceanic measurements. We discuss a possible contribution of the melting of the Greenland Ice Sheet to the slowdown. Using a multi-proxy temperature reconstruction for the AMOC index suggests that the AMOC weakness after 1975 is an unprecedented event in the past millennium (p > 0.99). Further melting of Greenland in the coming decades could contribute to further weakening of the AMOC. (wiggle words in bold)

Activists pushing global warming/climate change are trying to get ahead of the likely coming cooling phase following the recent warming phase of the natural climate cycle. The kernal of truth in their hand waving resides in the initial report from the RAPID project.

“We have shown that there was a slowdown in the AMOC transport between 2004 and 2012 amounting to an average of −0.54 Sv yr−1 (95 % c.i. −0.08 to −0.99 Sv yr−1) at 26◦ N, and that this was primarily due to a strengthening of the southward flow in the upper 1100 m and a reduction of the southward transport of NADW below 3000 m. This trend is an order of magnitude larger than that predicted by climate models associated with global climate change scenarios, suggesting that this decrease represents decadal variability in the AMOC system rather than a response to climate change. (lower North Atlantic deep water (LNADW) upper (UNADW) . . .our observations show no significant change in the Gulf Stream transport over the 2004–2012 period when the AMOC is decreasing.”

Oceanographers are not alarmed, unlike activists Ramsdorf, Mann and Box.  For example these recent papers: Recent slowing of Atlantic overturning circulation as a recovery from earlier strengthening by Laura C. Jackson, K. Andrew Peterson, Chris D. Roberts & Richard A. Wood 23 May 2016.   Abstract:

The Atlantic meridional overturning circulation (AMOC) has weakened substantially over the past decade. Some weakening may already have occurred over the past century, and global climate models project further weakening in response to anthropogenic climate change. Such a weakening could have significant impacts on the surface climate.

However, ocean model simulations based on historical conditions have often found an increase in overturning up to the mid-1990s, followed by a decrease. It is therefore not clear whether the observed weakening over the past decade is part of decadal variability or a persistent weakening. Here we examine a state-of-the-art global-ocean reanalysis product, GloSea5, which covers the years 1989 to 2015 and closely matches observations of the AMOC at 26.5° N, capturing the interannual variability and decadal trend with unprecedented accuracy.

The reanalysis data place the ten years of observations—April 2004 to February 2014—into a longer-term context and suggest that the observed decrease in the overturning circulation is consistent with a recovery following a previous increase. We find that density anomalies that propagate southwards from the Labrador Sea are the most likely cause of these variations. We conclude that decadal variability probably played a key role in the decline of the AMOC observed over the past decade. (my bolds)

And this paper: A reversal of climatic trends in the North Atlantic since 2005
by Jon Robson, Pablo Ortega & Rowan Sutton 06 June 2016. Abstract:

In the mid-1990s the North Atlantic subpolar gyre warmed rapidly, which had important climate impacts such as increased hurricane numbers and changes to rainfall over Africa, Europe and North America. Evidence suggests that the warming was largely due to a strengthening of the ocean circulation, particularly the Atlantic Meridional Overturning Circulation. Since the mid-1990s direct and indirect measurements have suggested a decline in the strength of the ocean circulation, which is expected to lead to a reduction in northward heat transport.

Here we show that since 2005 a large volume of the upper North Atlantic Ocean has cooled significantly by approximately 0.45 °C or 1.5 × 1022 J, reversing the previous warming trend. By analysing observations and a state-of-the-art climate model, we show that this cooling is consistent with a reduction in the strength of the ocean circulation and heat transport, linked to record low densities in the deep Labrador Sea. The low density in the deep Labrador Sea is primarily due to deep ocean warming since 1995, but a long-term freshening also played a role. The observed upper ocean cooling since 2005 is not consistent with the hypothesis that anthropogenic aerosols directly drive Atlantic temperatures.

Once again climatists exaggerate and ignore ocean oscillations in favor of their CO2 hysteria.  In the details of the AMOC report are observations that the heat transports slowed in part, increased in another part, and the warm gulf stream flow remained the same.

The AMO index supports this latter point, showing the continuing pulses of warm Atlantic water into the Arctic.

The next phase of the AMO will be cooler than the present, and will not be caused by human activity.

Background on AMOC is at Climate Pacemaker: The AMOC