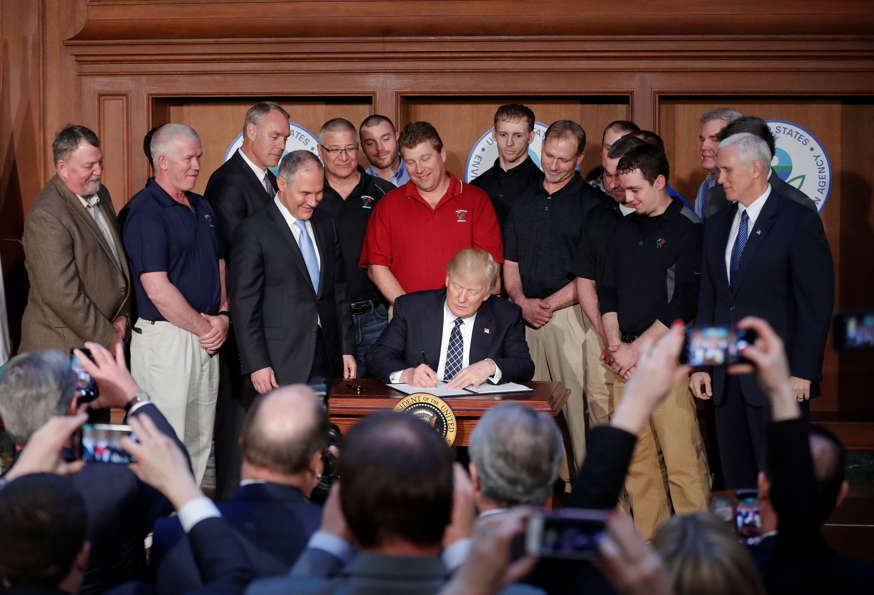 What’s in it?  The text is hard to find.

First and most prominently, the executive order directs the Environmental Protection Agency to review the Clean Power Plan, one of Obama’s key regulatory actions to drive down greenhouse gas emissions in the electric power sector. Because an executive order cannot directly overturn a regulation, the EPA will have to come to a finding about whether the CPP should be revised or repealed.

The Supreme Court ruled in a 7-to-2 decision in June 2014 that the Obama administration’s Environmental Protection Agency is free to regulate carbon dioxide in the atmosphere, as long as the source of emissions in question is a traditional polluter, like a factory or a power plant, rather than a school or a shopping mall. The decision was largely written by conservative Justice Antonin Scalia. However, the Court also chastised the EPA for acting without a clear directive from Congress.

Some claim that the Supreme Court requires EPA to regulate greenhouse gases, but that is not correct. The Court ruled that CO2 can be considered a “pollutant” under the Clear Air Act, but EPA decides what, if anything to do about it. Expect lots of legal activity around this, including EPA seeking congressional legislation before regulating.

While determining the fate of the CPP could end up being a complex multi-year undertaking, the order also includes the following actions that can be carried out quickly:

Finally, although Trump’s directive does not directly address American engagement in the Paris Agreement or other international climate agreements, it does have some implications for broader U.S. engagement in international climate policy. Rolling back the CPP would remove an important component of the American climate strategy and make it more difficult to achieve Obama’s U.S. climate targets. Other players, including big emitters like China, the European Union, and India, are aware of Trump’s stance on climate and will not be surprised by this action: most countries have committed to continuing to pursue their own goals in development as well as climate actions.

Thanks to Junk Science for putting up the full text (here)

Lots of freaking out by true believers.  Here is a balanced review of this EO.

Trump’s Executive Order On Energy: This Time, He Listened To The Lawyers

President Donald Trump’s executive order dismantling large chunks of Barrack Obama’s environmental legacy is a cleverly written document that avoids the pitfalls of Trump’s controversial orders on immigration. Unlike those orders, which have been suspended by federal courts, this one bears the clear stamp of experienced government lawyers and leaves the administration with a rich variety of tactical choices on how to eliminarte Obama-era regulations on fossil fuels.

Eliminating the previous administration’s legal memorandum could be a speedier way to get rid of the CPP, although it would still have to go through a notice and comment period as well as the inevitable legal challenges. The government wouldn’t have to delve as deeply into the scientific record, however, which the Obama administration provided in ample detail to justify its plan. Instead, the Trump administration would argue the CPP, which takes a systemwide approach toward reducing CO2 emissions, is based on an incorrect reading of federal law.

The order also calls for the elimination of the Interagency Working Group on Social Cost of Greenhouse Gases, as well as its findings on the cost of global warming, which it pegged at $42 a ton by 2020. Effective immediately, the administration will use Bush-era standards to judge the cost of carbon emissions.

Environmentalists and states can and will sue to try and force the administration to stick to the Obama-era goals for reducing CO2 emissions. But the EPA can only work with the tools Congress gave it, and Chevron deference allows the agency to determine how powerful those tools are. So it can simply say that federal statutes don’t give it the power to reorder the electric grid to cut emissions by 30%; perhaps the limit, by ordering existing plants to the highest levels of efficiency achievable with current technology, is a few percent. The agency can then argue further cuts have to come from Congress.