Satellite image of sea surface temperature in the Gulf Stream.

Climates are locally defined according to their weather patterns combining temperature and precipitation. Those two variables determine the flora and fauna to survive and flourish in any locale. A number of posts here support the theme that Oceans Govern Climate, and this is another one, summarizing the findings from a new paper published in Nature Communications Pronounced centennial-scale Atlantic Ocean climate variability correlated with Western Hemisphere hydroclimate by Thirumalai et al. 2018. Below is an overview from Science Daily followed by excerpts from the paper with my bolds. (Note:  SST refers to sea surface temperatures, SSS refers to sea surface salinity, and GOM means Gulf of Mexico.)

Science Daily Rainfall and ocean circulation linked in past and present

Research conducted at The University of Texas at Austin has found that changes in ocean currents in the Atlantic Ocean influence rainfall in the Western Hemisphere, and that these two systems have been linked for thousands of years.

The findings, published on Jan. 26 in Nature Communications, are important because the detailed look into Earth’s past climate and the factors that influenced it could help scientists understand how these same factors may influence our climate today and in the future.

“The mechanisms that seem to be driving this correlation [in the past] are the same that are at play in modern data as well,” said lead author Kaustubh Thirumalai, postdoctoral researcher at Brown University who conducted the research while earning his Ph.D. at the UT Austin Jackson School of Geosciences. “The Atlantic Ocean surface circulation, and however that changes, has implications for how the rainfall changes on continents.”

Open image in new tab if animation is not working.

Here we present a replicated reconstruction of sea-surface temperature and salinity from a site sensitive to North Atlantic circulation in the Gulf of Mexico which reveals pronounced centennial-scale variability over the late Holocene. We find significant correlations on these timescales between salinity changes in the Atlantic, a diagnostic parameter of circulation, and widespread precipitation anomalies using three approaches: multiproxy synthesis, observational datasets, and a transient simulation.

Our results demonstrate links between centennial changes in northern Atlantic surface-circulation and hydroclimate changes in the adjacent continents over the late Holocene. Notably, our findings reveal that weakened surface-circulation in the Atlantic Ocean was concomitant with well-documented rainfall anomalies in the Western Hemisphere during the Little Ice Age.

Here we address this shortfall and reconstruct SST and SSS variability over the last 4,400 years using foraminiferal geochemistry in marine sediments cored from the Garrison Basin (26°40.19′N,93°55.22′W, (purple circle in diagrams above), northern GOM. We make inferences about past changes in Loop Current strength by identifying time periods in our reconstruction where synchronous decreases in SST and SSS are interpreted as periods with a weaker Loop Current due to reduced eddy penetration over that period and vice versa. Thus, we assess the spatial heterogeneity of the putative reduction of Atlantic surface-ocean circulation and furthermore, with multiproxy synthesis, correlation analysis, and model-data comparison, we document linkages between changes in Atlantic surface-circulation and Western Hemisphere hydroclimate anomalies. Our findings reveal that regardless of whether changes in the AMOC and deepwater formation occurred or not, weakened surface-circulation prevailed in the northern Atlantic basin during the Little Ice Age and was concomitant with widespread and well-documented precipitation anomalies over the adjacent continents. 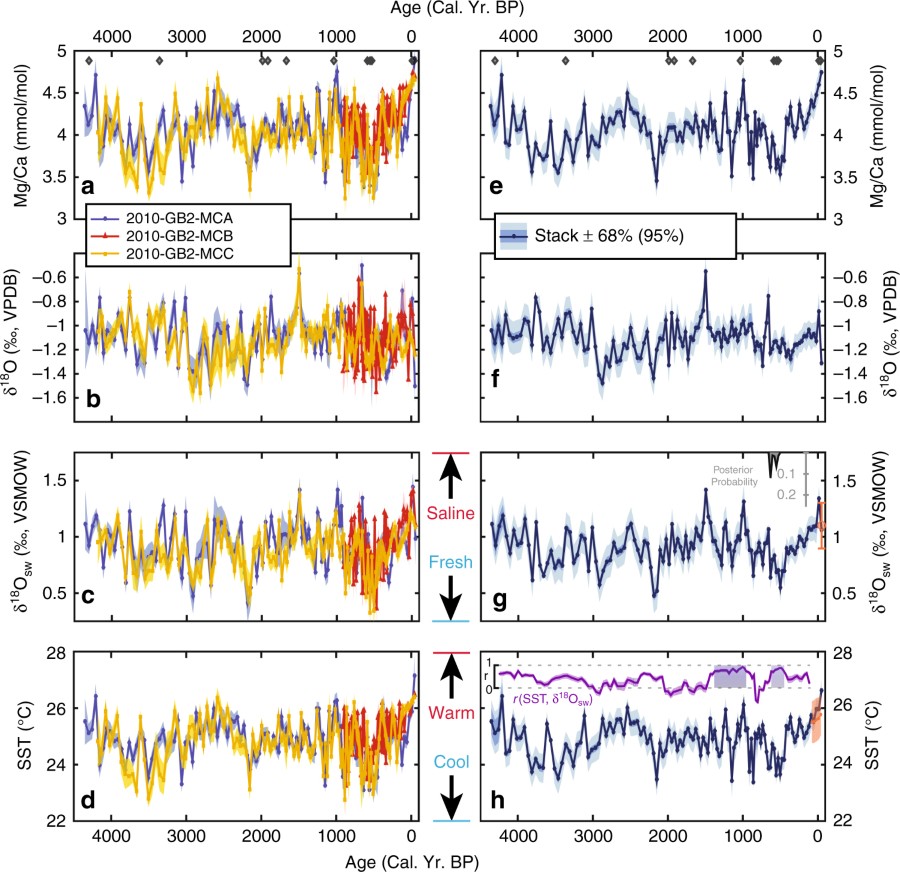 Figure 2. Garrison Basin multicore reconstructions and corresponding stacked records. Individual core Mg/Ca (mmol/mol) and δ18Oc data (‰, VPDB), and δ18Osw (‰, VSMOW) and SST (°C) reconstructions (blue–MCA, red- MCB, yellow–MCC) plotted with median and 68% uncertainty envelope incorporating age, analytical, calibration, and sampling errors (a-d) along with corresponding median stacked records with 68% and 95% confidence bounds (e-h). Diamonds in a and e indicate stratigraphic points sampled for radiocarbon. Gray histogram in g is the probability distribution for a changepoint in the δ18Osw time series. Orange circle in g is the mean of available δ18Osw measurements in the GOM and orange line in h is observed monthly mean SST with uncertainty envelope calculated using a Monte Carlo procedure that simulates foraminiferal sampling protocol. Purple line in h is the 100-year running correlation between SST and δ18Osw with corresponding uncertainty with shaded boxes indicating correlations with r > 0.7 (p < 0.001), which is the basis for identifying time periods where Loop Current and associated processes are relevant.

We analyzed long-term (~multidecadal) observations in instrumental datasets to place our reconstructions into a global climatic context. The HadISST data set22 documents 0.4–0.7 °C of multidecadal SST variability in the northern GOM over the last century. On these multidecadal timescales, SSTs in the northern GOM correlate highly with SST in the Loop Current region. In particular, long-term SST variability here is impacted by the Loop Current through its eddy shedding processes which are coupled to the strength of transport from the Yucatan Straits through the Florida Straits: if Loop Current transport is anomalously low, then northern GOM SSTs are anomalously cooler due to decreased eddy penetration and the opposite is the case when Loop Current transport is anomalously higher, i.e., northern GOM experiences anomalously warmer conditions. Furthermore, the Loop Current, sitting upstream of where the Gulf Stream originates, correlates highly with SST associated with regions encompassing downstream currents.

Approach to understanding past circulation and hydroclimate

Taken together, we interpret past periods in the Garrison Basin reconstructions when both SST and δ18Osw variability were positively correlated (salty/warm or fresh/cool) as periods during which Loop Current strength fluctuated. We hypothesize that during these periods, increased Loop Current penetration led to increased SST as well as increased advection of more enriched δ18Osw (or more saline waters) into the northern GOM. Using the correlation analysis as a blueprint28, we can pinpoint whether these past fluctuations in the northern GOM δ18Osw record (such as during the LIA) were concomitant with changes in pan-Atlantic SSS records that would implicate circulation changes in the northern Atlantic Ocean. Finally, the long-term correlations with precipitation allow us to contextualize periods where surface-ocean circulation and continental rainfall anomalies were linked, which can then be placed within a multiproxy framework.

In comparing available reconstructions of precipitation during the LIA with our correlation map (Fig. 1), we find remarkable agreement with the proxy record: tree-ring-based PDSI reconstructions in southern North America, and stalagmites from southern Mexico43 and Peru44 capture a wetter LIA compared to modern times whereas a lake record from southern Ghana, titanium percent in Cariaco Basin sediments, and reconstructed PDSI in the southeast U. S. indicate dry LIA conditions. Additional proxy records appear to corroborate this observation as well (brown and green squares in Fig. 1; Supplementary Table 1). These mean state changes during the LIA all appear to be coeval with an anomalously fresher northern Atlantic Ocean, indicative of weakened Gulf Stream strength and reduced surface-ocean circulation. 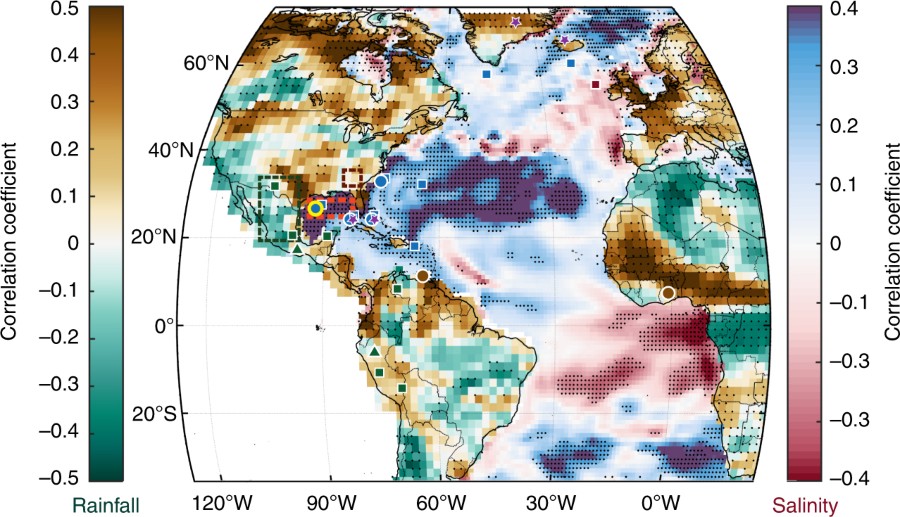 Figure 5. Simulated correlations between sea-surface salinity and rainfall over last millennium. Correlation map between northern Gulf of Mexico SSS (dashed red box) and global oceanic SSS (red-blue scale) as well as continental precipitation (brown-green scale) from the MPI-ESM transient simulation of the last millennium along with locations of proxy records used in the study. Proxy markers are filled as in Fig. 1. Correlations were performed with 50–150 year bandpass filters to isolate centennial scale variability, where black stippling indicates significance at the 5% confidence level

The transient simulation indicates that a weaker gyre, increased sea-ice cover, and reduced interhemispheric heat transport causes the ITCZ to shift southward and produces anomalous rainfall over the Americas.

This state of weakened AMOC, observed in millennial-scale and glacial paleo-studies, with cool and fresh north Atlantic anomalies and a southward ITCZ, can induce increased rainfall over the southwest US via atmospheric teleconnections associated with the North Atlantic subtropical high overlying the gyre. Despite this southward shift, positive SSS anomalies can occur in the tropical Atlantic (and negative anomalies in the northern Atlantic) due to reduced freshwater input resulting from decreased rainfall in the Amazon and West African regions. Eventually, the tropical positive salinity anomaly in the southern Atlantic propagates northward, thereby strengthening meridional oceanic transport and providing the delayed negative feedback.

Though the length of the instrumental record limits us from directly analyzing centennial-scale correlations, there is theoretical and modeling evidence to implicate similar ocean-atmosphere processes on multidecadal and centennial timescales. Both model and observational analyses reveal a dipolar structure in Atlantic Ocean SSS that is consistent with the LIA proxies and thereby supports our hypothesis linking meridional salt transport and tropical rainfall. Both analyses also display similarities in continental precipitation patterns over western Africa, northern South America, and the southwestern United States, which are also consistent with the LIA hydroclimate proxies.

The broad agreement between the analyses supports similar ocean-atmosphere processes on multidecadal-to-centennial timescales, and provides additional evidence of a robust century-scale link between circulation changes in the Atlantic basin and precipitation in the adjacent continents.

Regardless of the specific physical mechanism concerning the onset of the LIA, and whether AMOC changes were linked with circulation changes in the surface ocean, we hypothesize that the reported oscillatory feedback on centennial-time scales involving the surface-circulation in the Atlantic Ocean and Western Hemisphere hydroclimate played an important role in last millennium climate variability and perhaps, over the late Holocene.