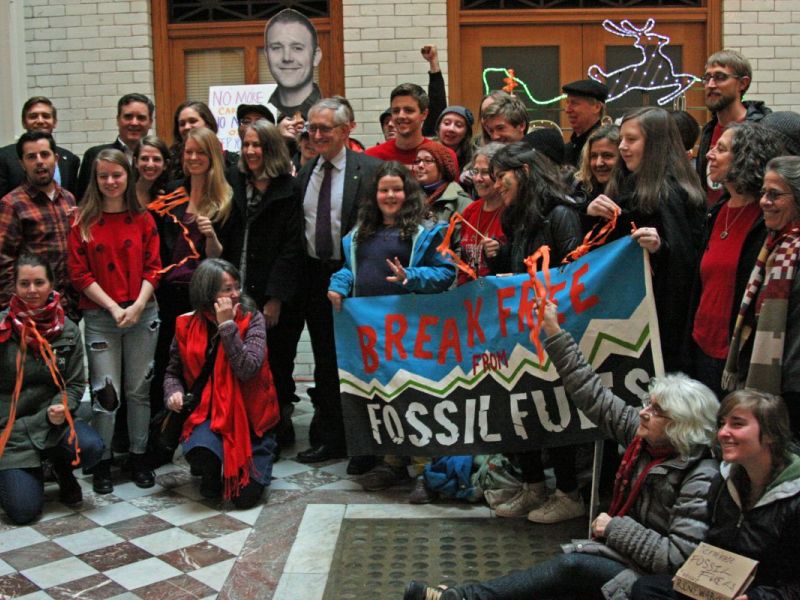 Lots of cheerleaders celebrated when in 2015, the City of Portland Oregon passed a city ordinance against fossil fuel infrastructure. Resilience.org published today praising Portland as the “First U.S. City to Ban Fossil Fuel Expansion Offers Roadmap for Others”. A year ago the event was proclaimed: Portland Makes History with New Protections from Fossil Fuels Dec. 14, 2016. It was a successful blow by protesters motivated by NIMBY (Not In My Back Yard). Excerpts below with my bolds.

But there’s more to the story. In July 2017 came this story from the Oregonian:

Oregon’s Land Use Board of Appeals (LUBA) on Wednesday rejected Portland’s limits on the expansion of fossil fuel infrastructure in the city, saying the ordinance violated the commerce clause of the U.S. Constitution.

The Portland Business Alliance joined fuel suppliers to appeal to the state Land Use Board of Appeals. They cited a number of grounds for the appeal, but Wednesday’s decision was based on a violation of the commerce clause, which gives the federal government the right to regulate trade between states and other nations.

The city is considering an appeal to the State Court of Appeals.

“This decision is disappointing and goes against the interests of our community,” according to a statement issued by Mayor Ted Wheeler. “It is incumbent upon us to protect our residents from the enormous risks posed by fossil fuels. The City is reviewing the ruling and exploring our options, including an appeal. Additionally, we will continue to work with environmental, energy, and resiliency experts to ensure Portland remains a leader on these issues.” Then in January 2018 comes a ruling from the Appeals court: Portland Ban On Fossil Fuel Terminals Is Constitutional

The Oregon Court of Appeals ruled Thursday that the Portland City Council did not violate the U.S. Constitution with a 2015 resolution that banned new fossil fuel terminals.

The court reversed a significant portion of an Oregon Land Use Board of Appeals ruling, which found the ban unconstitutional.

Portland’s use of zoning laws to ban the construction and expansion of fossil fuel terminals matters for a couple reasons.

In Oregon, tanks located in North Portland supply about 90 percent of the fossil fuels used statewide.

Nationally, the ordinance also tested a new strategy for left-leaning cities that want to limit fossil fuel use as a way to combat climate change.

“Other cities were looking to the city of Portland and what they had done as a potential model for other ordinances,” said attorney Maura Fahey with the Crag Law Center.

The text of the Oregon Court of Appeal ruling is at Columbia Pacific v. City of Portland

The review concerned the July ruling by Land Use Board of Appeals (LUBA), The arguments revolve around the federal commerce principle that states are not allowed to favor their own merchants by discriminating against out of state suppliers, or favor their consumers over out of state consumers. The court decided that Portland was not guilty of that result, and also considered a precedent from Pike (US Supreme Court case):

“Where the statute regulates even-handedly to effectuate a legitimate local public interest, and its effects on interstate commerce are only incidental, it will be upheld unless the burden on such commerce is clearly excessive in relation to the putative local benefits. If a legitimate local purpose is found, then the question becomes one of degree. And the extent of the burden that will be tolerated will of course depend on the nature of the local interest involved, and on whether it could be promoted as well with a lesser impact on interstate activities.”

However, the judges left a door open regarding the public detriment due to restricting fossil fuels for consumers.

Before LUBA, Columbia Pacific argued that that finding was essential to the city’s decision not to allow expansion of existing bulk fossil-fuel terminals and that the specific finding that use of fossil fuels may “plateau and decline” with a continued shift to other modes of transportation, more fuel efficient vehicles, electric vehicles, and other carbon reduction strategies was not supported by an adequate factual base as required by Goal 2. Columbia Pacific, ___ Or LUBA at ___ (slip op at 55). LUBA agreed with Columbia Pacific, concluding that Finding 21 was “key support for the prohibition on any expansion of existing terminals to meet * ** local or regional needs” and its conclusion that fossil-fuel use “may plateau and decline” was “not supported by substantial evidence, and hence not supported by an adequate factual base.”

The Appeals court sided with the defendants on this aspect, noting that “the only evidence in the record projecting future fossil-fuel demand cited to us by either party or LUBA are trend-based forecasts indicating that demand will moderately increase over time.”

Will reasonable people come together and set aside irrational fears?  It remains to be seen.  From the Portland Business Journal

The Portland Business Alliance, in a statement to Willamette Week, said it hopes the city sees the ruling as “an opportunity to bring parties back to the table to revisit elements of the ordinance which, as originally adopted, significantly impact fuel access and affordability” throughout the region.

The Western States Petroleum Association, asked via email if it would appeal the new ruling, sent this statement from Oyango Snell, its general counsel:

The Columbia Pacific Building Trades Council and the Western States Petroleum Association and its members are disappointed with the Oregon Court of Appeals’ decision to allow an unconstitutional ban on new fossil fuel infrastructure in Portland. The Fossil Fuel Zoning Ordinance is not only a violation of Oregon and Portland City land use laws, but punishes consumers and businesses in the city and throughout Oregon, who rely on affordable fuel to power their homes, their businesses and the economy.

Here is what they are up against on the other side:

NIMBY in Canada:  Alberta and British Columbia go to war over pipeline expansion

In a similar power struggle, BC province, led by leftist Vancouverites has moved to prevent construction of the expanded Kinder-Morgan pipeline to move bitumen from Alberta to west coast seaports serving Asian customers.  Canadian federal authorities have signed off on this, with PM Trudeau telling the greens that if they liked his carbon tax, they have to swallow this because it is a package deal.

Ironically both provinces are governed by left wing NDP politicos, but despite (or perhaps because of that) the rhetoric is going over the top.  National Post reports
Could Alberta bring B.C. to its knees by shutting off the oil?
If they don’t like pipelines, let’s see if B.C. likes having a main supply of gasoline turned off.  This comes after the Alberta premier earlier threatened to stop importation of BC wines.

Next:  Attacks on energy access on the East Coast (New England) Payback Upon Climate Grasshoppers

For more on climate issues in courts of law:

Critical Climate Intelligence for Jurists (and others)