The image shows what is known about how ocean currents flow under the influence of the earth’s rotation. A recent article adds another level of complexity and insight by examining smaller scale effects. From the American Institute of Physics Researchers challenge our assumptions on the effects of planetary rotation Excerpts in italics with my bolds.

The Coriolis effect impacts global patterns and currents, and its magnitude, relative to the magnitude of inertial forces, is expressed by the Rossby number. For over 100 years, scientists have believed that the higher this number, the less likely Coriolis effect influences oceanic or atmospheric events. Recently, however, researchers found that smaller ocean disturbances with high Rossby numbers are influenced by the Coriolis effect. Their discovery challenges assumptions of theoretical oceanography and geophysical fluid dynamics.

A 2-D image of the velocity in an internal jet with the Rossby number of 100 that shows how planetary rotation leads to the destabilization and dispersion of an initially coherent flow pattern. Credit: Timour Radko and David Lorfeld

Earth’s rotation causes the Coriolis effect, which deflects massive air and water flows toward the right in the Northern Hemisphere and toward the left in the Southern Hemisphere. This phenomenon greatly impacts global wind patterns and ocean currents, and is only significant for large-scale and long-duration geophysical phenomena such as hurricanes. The magnitude of the Coriolis effect, relative to the magnitude of inertial forces, is expressed by the Rossby number. For over 100 years, scientists have believed that the higher this number, the less likely Coriolis effect influences oceanic or atmospheric events.

Recently, researchers at the Naval Postgraduate School in California found that even smaller ocean disturbances with high Rossby numbers, like vortices within submarine wakes, are influenced by the Coriolis effect. Their discovery challenges assumptions at the very foundation of theoretical oceanography and geophysical fluid dynamics. The team reports their findings in Physics of Fluids, from AIP Publishing.

“We have discovered some major — and largely overlooked — phenomena in fundamental fluid dynamics that pertain to the way the Earth’s rotation influences various geophysical flows,” Timour Radko, an oceanography professor and author on the paper, said.

Radko and Lt. Cmdr. David Lorfeld originally focused on developing novel submarine detection systems. They approached this issue by investigating pancake vortices, or flattened, elongated mini-eddies located in the wakes of submerged vehicles. Eddies are caused by swirling water and a reverse current from waterflow turbulence.

Last year, a team led by Radko published a paper in the same AIP journal on the rotational control of pancake vortices, the first paper that challenged the famous “Rossby rule.” In this most recent paper, the researchers showed, through numerical simulations, that internal jets of the wake can be directly controlled by rotation. They also demonstrated that the evolution of a disorganized fine-scale eddy field is determined by planetary rotation.

The algorithm that the researchers developed is based on the dissimilar evolution of cyclones and anticyclones, which is a consequence of planetary rotation. “Therefore,” Radko concluded, “such effects must be considered in the numerical and theoretical models of finescale oceanic processes in the range of 10-100 meters.” 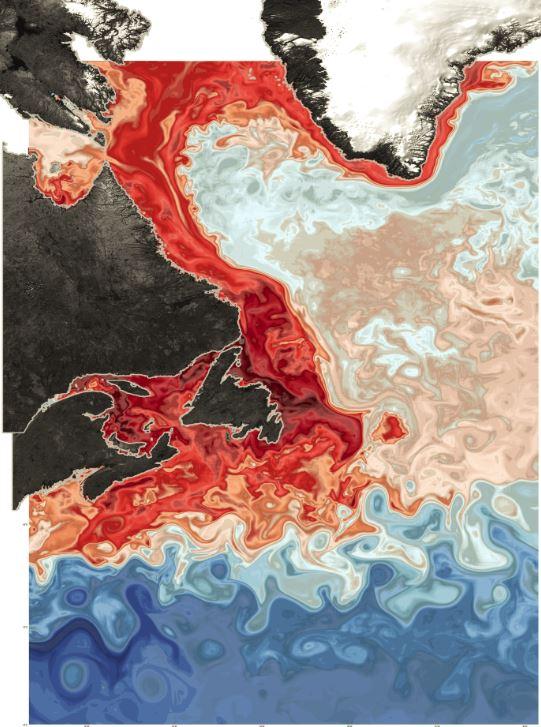 The computer model is detailed enough to resolve eddies that are important for ocean circulation. The triangle-shaped island of Newfoundland, center, is at the eastern edge of the study area, the mouth of the Gulf of St. Lawrence. This graphic shows oxygen at the surface, where red shows more oxygen. Credit: Mariona Claret/University of Washington

Background:  Ocean Physics in a Cup of Coffee