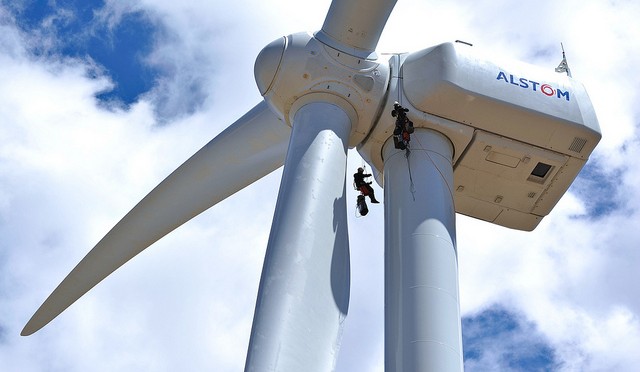 Robert Bryce reports on the end of wind power hopes in City Journal.  Why Wind Power Isn’t the Answer  Excerpts in italics with my bolds

As a new study confirms, turbines would have to be stacked across state-sized swaths of the American landscape.

On October 8, the Intergovernmental Panel on Climate Change released a report warning that nations around the world must cut their greenhouse-gas emissions drastically to reduce the possibility of catastrophic climate change. The report emphasizes “fast deployment of renewables like solar and wind” and largely ignores the essential role nuclear energy must play in any decarbonization effort.

Four days earlier, to much less fanfare, two Harvard researchers published a paper showing that trying to fuel our energy-intensive society solely with renewables would require cartoonish amounts of land. How cartoonish? Consider: meeting America’s current demand for electricity alone—not including gasoline or jet fuel, or the natural gas required for things like space heating and fertilizer production—would require covering a territory twice the size of California with wind turbines.

The IPCC and climate-change activists love solar and wind energy, and far-left politicians like Alexandria Ocasio-Cortez have called for a wartime-style national mobilization to convert to 100 percent renewable-energy usage. But this credo ignores a fundamental truth: energy policy and land-use policy are inextricable.

The renewables-only proponents have no trouble mobilizing against land use for the extraction of hydrocarbons. Consider the battle in Colorado over Proposition 112, which will prohibit oil- and gas-drilling activities within 2,500 feet of homes, hospitals, schools and “vulnerable areas.” Environmental groups including 350.org, the Sierra Club, and Greenpeace have endorsed the initiative, which will appear on the November 6 ballot. If it passes, Proposition 112 would effectively ban new oil and gas production in Colorado, the nation’s fifth-largest natural gas producer. Or consider the months-long demonstrations that ended last year in South Dakota over the Dakota Access pipeline. More than 700 climate-change activists and others were arrested during protests claiming that Dakota Access, by crossing the traditional lands of the Standing Rock Sioux, was violating the tribe’s cultural and spiritual rights. These energy- and land-use battles are waged by climate activists and environmental groups whose goal is to shutter the hydrocarbon industry. Most of these groups, including 350.org and Sierra Club, routinely claim that the American economy can run solely on renewables. Further, the Sierra Club has tallied 74 U.S. cities that have pledged to get all of their electricity from renewable energy. 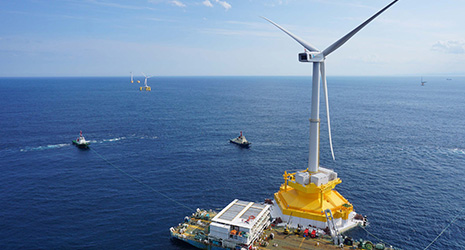 Japan is going to remove this Fukushima turbine, one of the world’s largest with a rotor diameter of 167 meters. It was deemed unprofitable due to multiple malfunctions decreasing the utilization rate. Its utilization rate over the year through June 2018 was 3.7 percent, well below the 30 percent necessary for commercialization.

But the new study, published in Environmental Research Letters, shows yet again that wind energy’s Achilles heel is its paltry power density. “We found that the average power density—meaning the rate of energy generation divided by the encompassing area of the wind plant—was up to 100 times lower than estimates by some leading energy experts,” said lead author Lee Miller, a postdoctoral fellow who coauthored the report with Harvard physics professor David Keith. The problem is that most estimates of wind energy’s potential ignore “wind shadow,” an effect that occurs when turbines are placed too closely together: the upwind turbines rob wind speed from others placed downwind.

The study looks at 2016 energy-production data from 1,150 solar projects and 411 onshore wind projects. The combined capacity of the wind projects totaled 43,000 megawatts, or roughly half of all U.S. wind capacity that year. Miller and Keith concluded that solar panels produce about 10 times more energy per unit of land as wind turbines—a significant finding—but their work demands attention for two other reasons: first, it uses real-world data, not models, to reach its conclusions, and second, it shows that wind energy’s power density is far lower than the Department of Energy, the IPCC, and numerous academics have claimed.

Further: “While improved wind turbine design and siting have increased capacity factors (and greatly reduced costs), they have not altered power densities.” In other words, though Big Wind has increased the size and efficiency of turbines—the latest models stand more than 700 feet tall—it hasn’t been able to wring more energy out of the wind. Due to the wind-shadow effect, those taller turbines must be placed farther and farther apart, which means that the giant turbines cover more land. As turbines get taller and sprawl across the landscape, more people see them.

Rural residents are objecting to wind projects because they want to protect their property values and viewsheds. They don’t want to see the red-blinking lights atop those massive turbines, all night, every night, for the rest of their lives. Nor do they want to be subjected to the health-damaging noise—both audible and inaudible—that the turbines produce.

The backlash against Big Wind is coast to coast. In New York, which has mandated 50 percent renewable-energy usage by 2030, the towns of Yates and Somerset are fighting against Lighthouse Wind, a 200-megawatt wind project proposed for the shores of Lake Ontario. In Oklahoma, the tiny town of Hinton continues its battle against NextEra Energy, the world’s biggest wind-energy producer, over the siting of wind projects nearby. In California, which just boosted its renewable-electricity mandate to 60 percent by 2030, wind turbines are so unpopular that the industry has effectively given up trying to site new projects there. Meantime, in deep-blue Vermont, both gubernatorial candidates—incumbent Republican Phil Scott and Democratic challenger Christine Hallquist—favor renewable energy in principle but oppose further wind-energy development in the state.

Why the hardball tactics? Simple: rural residents stand between Big Wind and tens of billions of dollars in subsidies available through the Production Tax Credit. In September, Lisa Linowes, cofounder and executive director of the Industrial Wind Action Group, a New Hampshire-based nonprofit that tracks the wind industry, published an article on MasterResource.org. “The US Treasury estimates the PTC will cost taxpayers $40.12 billion in the period from 2018 to 2027,” Linowes wrote, “making it, by far, the most expensive energy subsidy under current tax law.”

The punchline here is obvious: wind energy has been sold as a great source of “clean” energy. The reality is that wind energy’s expansion has been driven by federal subsidies and state-level mandates. Wind energy, cannot, and will not, meet a significant portion of our future energy needs because it requires too much land.

Miller and Keith’s paper shows that the ongoing push for 100-percent renewables, and, in particular, the idea that wind energy is going to be a major contributor to that goal, is not just wrongheaded—it’s an energy dead end.

Robert Bryce is a senior fellow at the Manhattan Institute and the producer of the forthcoming documentary, Juice: How Electricity Explains the World, which will be released in 2019.

Footnote:  It bears repeating here that modern societies have benefited greatly by sourcing their energy from underground rather then above ground.   From post excerpting writing by Pierre Desrochers and Joanna Szurmak, Control Population, Control the Climate. Not.

“Pessimists are also oblivious to the benefits of unlocking wealth from underground materials such as coal, petroleum, natural gas and mineral resources. Using these spares vast quantities of land. It should go without saying that even a small population will have a much greater impact on its environment if it must rely on agriculture for food, energy and fibres, raise animals for food and locomotion, and harvest wild animals for everything from meat to whale oil. By replacing resources previously extracted from the biosphere with resources extracted from below the ground, people have reduced their overall environmental impact while increasing their standard of living.”