Despite predictions that US coal production and use are doomed, Trump policies are sparking an increase in “clean coal”, i.e. refined coal. Activists/alarmists say there is no such thing as clean coal, but as usual they conflate actual air pollution with CO2 emissions, which are plant food rather than toxic. A recent article from EIA explains the rise of refined coal U.S. production and use of refined coal continues to increase. Excerpts in italics with my bolds. 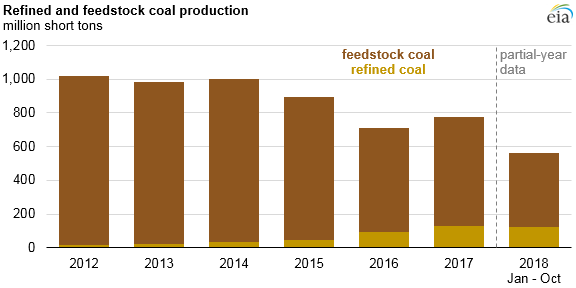 U.S. production of refined coal, which is coal that has been processed to reduce emissions when burned, reached record highs in 2017, and it is expected to increase even further in 2018. Use of refined coal has increased despite the general decline in total U.S. coal consumption since 2008. For the first three quarters of 2018, EIA estimates that refined coal production totaled 121 million short tons (MMst), which is 21% of the total U.S. coal production of 563 million short tons.

According to EIA estimates, refined coal’s share of total coal tonnage consumed for U.S. electricity generation will have increased from 15% in 2016 to more than 18% through October 2018. EIA began collecting data on generation from refined coal in 2016. 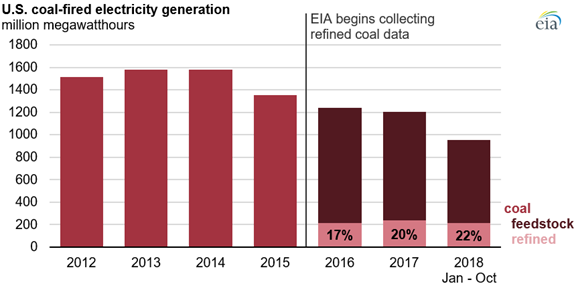 Refined coal is most commonly made by mixing proprietary additives to feedstock coal. These additives increase the production of mercury oxides, which can then be captured by using mercury emission reduction technologies such as flue gas desulfurization scrubbers and particulate matter control systems.

Refined coal production qualifies for a tax credit under the American Jobs Creation Act of 2004. To qualify for the refined coal tax credit, producers must have a qualified professional engineer demonstrate that burning the refined coal results in a 20% emissions reduction of nitrogen oxide and a 40% emissions reduction of either sulfur dioxide or mercury compared with the emissions that would result from burning feedstock coal. The tax credit was designed to increase with inflation and was valued at $6.91 per short ton produced in 2017 and $7.10 per short ton in 2018. EIA surveys show respondents continued to add refined-coal burning plants even as older conventional coal plants retire, with 36 new refined coal plants coming online from 2016 through October 2018.

The combination of refining the coal feedstock along with scrubbers is removing the actual environmental hazards. What is left is the unproven claim of global warming/climate change as the reason to deprive people of the benefits of burning coal for gaining power. Power to the people indeed.