Currently, the fashion is to prove global warming/climate change by pointing to “extreme” weather events. This week we have a new candidate for alarms: Marine Heat Waves. For example:

Suffering in the heat—the rise in marine heatwaves is harming ocean species Phys.org08:40

Variation in sea surface temperatures is not new. Cliff Mass of U. Washington, Seattle, educated us some years ago regarding a persistent patch of N. Pacific warm water he named: “The BLOB.” A series of posts at his blog covered this event starting in Autumn 2013, waxing and waning until finally disappearing in 2018. Most informative is The Blob Strengthens Excerpts in italics with my bolds.

The original BLOB, named by Washington State Climatologist Nick Bond, formed the previous winter (2013-2014). The BLOB was defined as a persistent region of anomalously warm water in the northeast Pacific. With the air reaching the Northwest generally passing over the BLOB, the result was warmer than normal temperatures.

And by the first week of this month, the BLOB seems to have returned, and with it, its evil twin, El Nino, indicated by the warm waters in the eastern tropical Pacific. Now we have a problem. Note that the temperatures in the BLOB are 2-3 C (roughly 4-5F) above normal.

The BLOB itself is not an independent player. It has been forced by an anomalous atmospheric circulation, including anomalous high pressure (ridging) centered north of our region (see map showing the height (pressure) anomalies (difference from normal) at 500 hPa (about 18,000ft) for the last 30 days. Yellow indicates higher heights than normal.

An article from that time (2016) at Climate Central took mainly the alarmist view, but also quoted a reasonable statement from Cliff Mass. California Drought, Marine Heat More Likely With Warming

The new findings could help scientists predict when similar marine heatwaves and droughts will strike in the future. They also suggest such heatwaves will become more common and intense, which could mean greater drought risks in the West. (By increasing evaporation and reducing snowfall, warmer temperatures are already making Western droughts worse.)

“This could potentially provide predictability,” said Cliff Mass, a University of Washington atmospheric sciences professor who wasn’t involved with the research. “This is natural variability that we’re dealing with.” 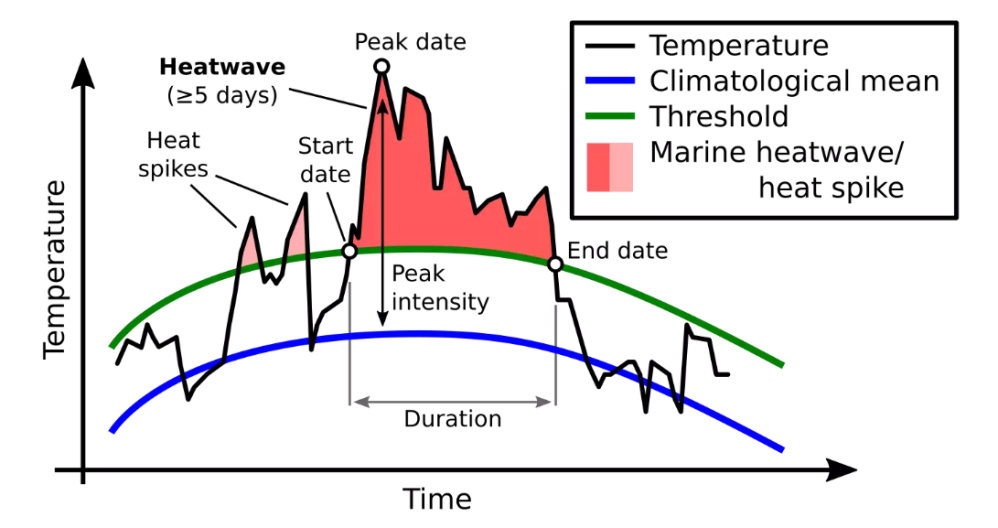 We use a recently developed definition of marine heatwaves (Hobday et al. 2016). A marine heatwave is defined a when seawater temperatures exceed a seasonally-varying threshold (usually the 90th percentile) for at least 5 consecutive days. Successive heatwaves with gaps of 2 days or less are considered part of the same event.

Marine heatwaves can be caused by a whole range of factors, and not all factors are important for each event. The most common drivers of marine heatwaves include ocean currents which can build up areas of warm water and air-sea heat flux, or warming through the ocean surface from the atmosphere. Winds can enhance or suppress the warming in a marine heatwave, and climate modes like El Niño can change the likelihood of events occurring in certain regions.

[Note: the phrase about the atmosphere warming the ocean is misleading. The ocean has 1000 times the heat capacity of the air, and the heat transfer is upward. From Columbia U. on the Ocean/Atmosphere Heat Flux:

Net infrared radiation cools the ocean, on a global average by 66 watts per square meter.

On global average the oceanic heat loss by conduction is only 24 watts per square meter. (If the ocean were colder than the atmosphere (which of course happens) the air in contact with the ocean cools, becoming denser and hence more stable, more stratified. As such the conduction process does a poor job of carrying the atmosphere heat into the cool ocean.)

On global average the heat loss by evaporation is 78 watts per square meter. (The largest heat loss for the ocean is due to evaporation, which links heat exchange with hydrological cycle.) ]

The trigger for the current concern is Marine heatwaves threaten global biodiversity and the provision of ecosystem services published March 4, 2019 at Nature Climate Change. Dan A. Smale is lead author with 17 co-authors. The media were quick to misinterpret the study and claim a link to burning of fossil fuels.  Excerpts in italics with my bolds.

Abstract: The global ocean has warmed substantially over the past century, with far-reaching implications for marine ecosystems. Concurrent with long-term persistent warming, discrete periods of extreme regional ocean warming (marine heatwaves, MHWs) have increased in frequency. Here we quantify trends and attributes of MHWs across all ocean basins and examine their biological impacts from species to ecosystems. Multiple regions in the Pacific, Atlantic and Indian Oceans are particularly vulnerable to MHW intensification, due to the co-existence of high levels of biodiversity, a prevalence of species found at their warm range edges or concurrent non-climatic human impacts. The physical attributes of prominent MHWs varied considerably, but all had deleterious impacts across a range of biological processes and taxa, including critical foundation species (corals, seagrasses and kelps). MHWs, which will probably intensify with anthropogenic climate change, are rapidly emerging as forceful agents of disturbance with the capacity to restructure entire ecosystems and disrupt the provision of ecological goods and services in coming decades.

The authors managed to produce an hockey stick graph by means of attaching an high-resolution instrumental record to low-resolution proxy estimates of the past. The method is described in the paper:

Global time series and regional trends in total MHW days were derived using a combination of satellite-based, remotely sensed SSTs and in situ-based seawater temperatures. First, total MHW days were calculated globally over 1982–2015 at 1/4° resolution from the National Oceanic and Atmospheric Administration (NOAA) Optimum Interpolation SST V2 high-resolution data. Then, proxies for total MHW days globally over 1900–2016 were developed on the basis of five monthly gridded SST datasets (HadISST v.1.1, ERSST v.5, COBE 2, CERA-20C and SODA si.3). A final proxy time series was calculated by averaging across the five datasets. The five monthly datasets were used since no global daily SST observations are available before 1982.

The three peaks in the modern record are clearly the result of the major El Ninos 1997, 2009 and 2015. And it is likely that mining the daily satellite records since 1982 identified marine heat waves that would not show up in the proxy monthly datasets.

This is another example of a natural process that threatens our livelihoods but which we struggle to predict and to adapt. As with other short-term weather events, humankind has a great stake in better understanding in order to forecast, prepare and manage adapations as required. There have always been major variations in warming and cooling sea surface temperatures. And yet the Global average anomalies vary by a few tenths of a degree celsius, with significant difference in the two hemispheres. This implies both that marine heat waves are offset by cold waves elsewhere, and that the well-mixed CO2 molecules are not to blame.