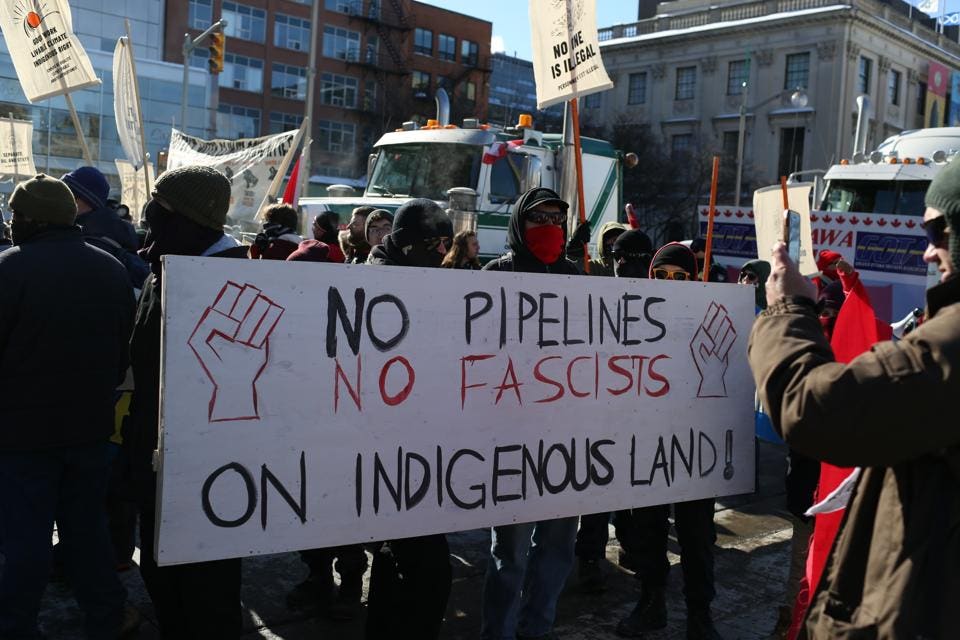 Demonstrators hold signs during a protest against the United We Roll Convoy For Canada pro-pipeline rally in front of Parliament Hill in Ottawa, Ontario, Canada, on Tuesday, Feb. 19, 2019. United We Roll Convoy For Canada lead organizer Glen Carritt said their main message is connecting the Canadian energy sector from the east to west through pipelines, according to Canadian Broadcasting Corp. Photographer: David Kawai/Bloomberg © 2019 BLOOMBERG FINANCE LP

The measles outbreak raises the issue of parents irrational fears of having their children vaccinated. SF Chronicle reports: All 10 kindergartens with the highest rates of vaccine exemptions are in N. California. Excerpts in italics with my bolds.

Ninety-five percent of the population needs to be vaccinated to stave off an outbreak of a very contagious disease, such as one that broke out at Disneyland in 2014.

Doctors say just 3 percent of children at most should be exempt, due to serious health complications, such as a child undergoing chemotherapy.

There is currently no authority in the state that decides on the validity of issued medical exemptions for vaccines.

California kindergartens with the highest medical exemption rates include:

Linking Fear of Vaccines with Fear of Fossil Fuels

Michael Lynch writes at Forbes Does The Measles Outbreak Have A Lesson For The Petroleum Industry? Excerpts in italics with my bolds.

Nearly everyone complains about the poor science literacy of the American public, but all too often they are referring to citizens’ refusal to believe what they want them to, whether its about climate change, vaccines, peak oil, or homeopathic medicine. The public has no problem accepting science (broadly defined) when it is to their benefit. Proposals to ban disposable diapers were popular briefly, before it was pointed out that the life-cycle effects of cotton diapers were not significantly better and possibly worse for the environment, after which the bans were quietly abandoned.

But the recent measles outbreak demonstrates a very important element of science literacy, namely the cost-benefit equation. People are relatively inattentive and more likely to adopt populist ideas when the impact on their lives is minimal, but employ more skepticism when the impact on their lives is significant. Although there are numerous cases of irrational fears driving policy, there are others where the public thinks more carefully.

Which is where the anti-vaccination movement can be a teachable moment. Until recently, criticism was primarily from those in the medical community. If the occasional child wasn’t vaccinated, it had little impact on others. But with this winter’s outbreak of measles, it has become obvious that there is a significant cost to the loss of herd immunity, and scrutiny of the science behind the anti-vaccination movement made it clear to many more people that it is somewhere between flawed and non-existent. Governments have put aside the passionate objections and demanded that vaccination be more widespread with much less resistance than would have appeared a few years ago.

Could this lesson prove valuable to the petroleum industry? There are two strong advocacy groups that are primarily passionate, not rational, with lots of overlap. Some oppose pipelines, thinking that will mean oil and gas will stay in the ground and not be consume, and others oppose fracking, in the belief that it is, well, scary or something.

Notice that no one discarded their cell phones when it was suggested they might cause brain tumors. Two elements seem to have come into play. First, the widespread use of cellphones without obvious negative health consequences encouraged skepticism about the possibility that there was a clear and present danger, as the saying goes. But also, giving up cellphones seemed like an unacceptable cost to most of the public.

Which is problematic for the petroleum industry. Banning fracking or pipeline construction appears much less contentious, especially where it is perceived as only affecting oil companies, or as many call them, “Big Oil.” In other words, such opposition is seen as cost-free and therefore easier to support, or at least ignore.

But familiarity is another element leading to acceptance. A couple of decades ago, I heard Michael Golay of M.I.T.’s nuclear engineering department talk about how new technologies were often resisted, but gradually became accepted as more and more people were familiar with them. (Railroads, cars, etc.) This certainly appears to be the case where nuclear power is concerned, as the operation of hundreds of reactors for decades has seen a total of two serious accidents (I don’t consider Three Mile Island a serious accident), but with two generations who have lived through operations of nuclear power with problems only under the most unusual of circumstances (a 1000-year tsunami), the early warnings of heavy death counts from nuclear power appear foolish.

The industry has tried to emphasize the fact is that both involve pipelines and fracking, while not ubiquitous like cellphones, have a long-standing provenance. There are 2.4 million miles of oil and gas pipelines in the United States, and over 2 million oil and gas wells have been hydraulically fractured. The industry has regularly pointed out these facts and they appear to have gained some traction, where mainstream politicians sometimes argue for tighter regulation, but few have embraced opponents.

Neither activity is completely safe, because nothing is completely safe. Having heavy trucks on highways increases fatalities, but no one suggests banning them, merely regulating them to improve safety. Banning cellphones would reduce deaths from distracted driving, but governments (with public support) have chosen to regulate them instead. Banning pipelines or fracking is not too dissimilar from those cases, except that it would not appear to have costs for the average citizen.

Because relatively few people were affected by bans on either (land-owners in western New York the most obvious exception), but as some gas companies cease new hookups because of lack of pipeline capacity, that could change. Unfortunately, the number of people affected will be minimal compared to, say, the threat from measles due to the anti-vaccine movement, however some of those will be small businesses that have more clout than home-owners.

Similarly, while the impact of any given shale well on world oil and gas prices is minimal, a slowing of fracking for oil could mean higher prices for consumers generally, especially given the current geopolitical situation. Which is not to say that the public should throw caution to the wind and allow both pipeline construction and fracking to occur without oversight, but merely that a more rational estimate of the costs and benefits should be made. This may seem like a vain hope, but remember, you can still buy disposable diapers.

Michael Lynch: I spent nearly 30 years at MIT as a student and then researcher at the Energy Laboratory and Center for International Studies. I then spent several years at what is now IHS Global Insight and was chief energy economist. Currently, I am president of Strategic Energy and Economic Research, Inc., and I lecture MBA students at Vienna University. I’ve been president of the US Association for Energy Economics, I serve on the editorial boards of three publications, and I’ve had my writing translated into six languages. My book, “The Peak Oil Scare and the Coming Oil Flood” was just published by Praeger.

One of the arguments by those fearing fossil fuels is that their use must stop now since we will soon run out of them.  Lynch rebuts this notion (“peak oil”) in the video below.  He addresses why people are mistaken to believe the following points of conventional “wisdom”:

Oil is finite and must run out.

Pundits are optimists, either conucopians or industry shills.

Reserve numbers are not reliable.

Only one barrel is found for every four consumed.

Why People Rely on Pipelines