The cool 2020 Spring is not just your local experience, it’s the result of Earth’s ocean cooling off after last summer’s warming in the Northern Hemisphere.  The chart below shows SST monthly anomalies as reported in HadSST3 starting in 2015 through May 2020.

Then  NH rose exceptionally by almost 0.5C over the four summer months, in August exceeding previous summer peaks in NH since 2015.  In the 4 succeeding months, that warm NH pulse has reversed sharply.  May NH anomaly is up a little from March but matching last November.  SH and Tropics SSTs bumped upward in March, but dropped sharply since. In May the Global anomaly is the same as December 2019.

Note that higher temps in 2015 and 2016 were first of all due to a sharp rise in Tropical SST, beginning in March 2015, peaking in January 2016, and steadily declining back below its beginning level. Secondly, the Northern Hemisphere added three bumps on the shoulders of Tropical warming, with peaks in August of each year.  A fourth NH bump was lower and peaked in September 2018.  As noted above, a fifth peak in August 2019 exceeded the four previous upward bumps in NH.

The highest summer NH peak came in 2019, only this time the Tropics and SH are offsetting rather adding to the warming. Since 2014 SH has played a moderating role, offsetting the NH warming pulses. Now in January 2020 last summer’s unusually high NH SSTs have been erased. (Note: these are high anomalies on top of the highest absolute temps in the NH.) 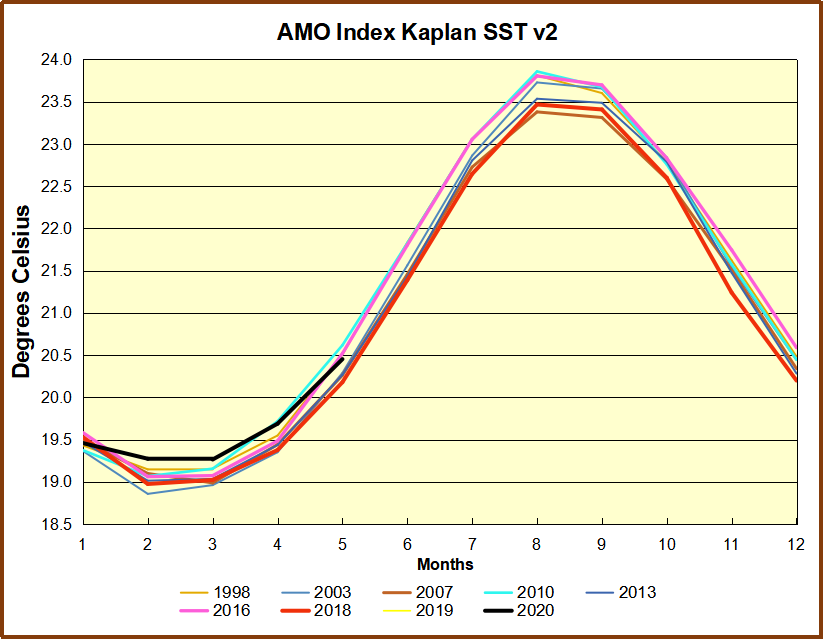 This graph shows monthly AMO temps for some important years. The Peak years were 1998, 2010 and 2016, with the latter emphasized as the most recent. The other years show lesser warming, with 2007 emphasized as the coolest in the last 20 years. Note the red 2018 line is at the bottom of all these tracks. The black line shows that 2020 began slightly warm, then set records for 3 months before dropping below 2016 and 2017.