In past weeks there have been anecdotal reports from frontline doctors that patients who would have been flattened fighting off SARS CV2 in April are now sitting up and recovering in a few days. We have also the statistical evidence in the US and Sweden, as two examples, that case numbers are rising while Covid deaths continue declining. One explanation is that the new cases are younger people who have been released from lockdown (in US) with stronger immune systems. But it may also be that the virus itself is losing potency.

In the past I have noticed theories about the origin of the virus, and what makes it “novel.” But when the scientist who identified HIV weighs in, I pay particular attention. The Coronavirus Is Man Made According to Luc Montagnier the Man Who Discovered HIV. Excerpts in italics with my bolds.

Contrary to the narrative that is being pushed by the mainstream that the COVID 19 virus was the result of a natural mutation and that it was transmitted to humans from bats via pangolins, Dr Luc Montagnier the man who discovered the HIV virus back in 1983 disagrees and is saying that the virus was man made.

Professor Luc Montagnier, 2008 Nobel Prize winner for Medicine, claims that SARS-CoV-2 is a manipulated virus that was accidentally released from a laboratory in Wuhan, China. Chinese researchers are said to have used coronaviruses in their work to develop an AIDS vaccine. HIV RNA fragments are believed to have been found in the SARS-CoV-2 genome.

“With my colleague, bio-mathematician Jean-Claude Perez, we carefully analyzed the description of the genome of this RNA virus,” explains Luc Montagnier, interviewed by Dr Jean-François Lemoine for the daily podcast at Pourquoi Docteur, adding that others have already explored this avenue: Indian researchers have already tried to publish the results of the analyses that showed that this coronavirus genome contained sequences of another virus, … the HIV virus (AIDS virus), but they were forced to withdraw their findings as the pressure from the mainstream was too great.

To insert an HIV sequence into this genome requires molecular tools

In a challenging question Dr Jean-François Lemoine inferred that the coronavirus under investigation may have come from a patient who is otherwise infected with HIV. No, “says Luc Montagnier,” in order to insert an HIV sequence into this genome, molecular tools are needed, and that can only be done in a laboratory.

According to the 2008 Nobel Prize for Medicine, a plausible explanation would be an accident in the Wuhan laboratory. He also added that the purpose of this work was the search for an AIDS vaccine.

In any case, this thesis, defended by Professor Luc Montagnier, has a positive turn.

According to him, the altered elements of this virus are eliminated as it spreads: “Nature does not accept any molecular tinkering, it will eliminate these unnatural changes and even if nothing is done, things will get better, but unfortunately after many deaths.”

This is enough to feed some heated debates! So much so that Professor Montagnier’s statements could also place him in the category of “conspiracy theorists”: “Conspirators are the opposite camp, hiding the truth,” he replies, without wanting to accuse anyone, but hoping that the Chinese will admit to what he believes happened in their laboratory.

To entice a confession from the Chinese he used the example of Iran which after taking full responsibility for accidentally hitting a Ukrainian plane was able to earn the respect of the global community. Hopefully the Chinese will do the right thing he adds. “In any case, the truth always comes out, it is up to the Chinese government to take responsibility.”

Implications: Leaving aside the geopolitics, this theory also explains why the virus weakens when mutations lose the unnatural pieces added in the lab. Since this is an RNA (not DNA) sequence mutations are slower, but inevitable. If correct, this theory works against fears of a second wave of infections. It also gives an unintended benefit from past lockdowns and shutdowns, slowing the rate of infections while the virus degrades itself.

The Palmer Foundation provides a portal for studies regarding HCQ and Coronavirus. For exmple this latest from the Marseille group Outcomes of 3,737 COVID-19 patients treated with hydroxychloroquine/ azithromycin and other regimens in Marseille, France: A retrospective analysis.  Excerpts with my bolds. 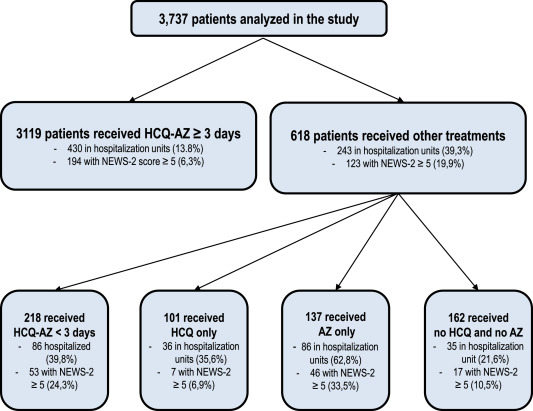 Our study has a retrospective observational design, and such characteristics may be presented as a limitation of the study [37]. Patients were not enrolled in perfectly homogeneous groups with regards to demographics, chronic conditions and clinical status at admission.

Treatments were not allocated randomly but according to the clinical status of patients and contra-indications to drugs, or preference of patients with regards to therapeutic options. As we have aimed to tests and treat all positive patients presenting to our institution, the patient population comprised a majority of patients with mild diseases and a minority of patients with severe disease, with the former managed at our day-care hospital and the latter as in-patients.

We enrolled all patients including those who started their treatment with delay or stopped it early. Because of the crisis situation we had to face, clinical, virological and radiological data were not documented in 100% patients. However, missing data may also be a limitation of RCT. Furthermore, RCT are not useful in the context of an emerging pandemic when commercially available drugs known to be active in vitro are available for immediate treatment [38,39].

Our approach of early diagnosis and care of as many patients as possible results in much lower mortality rates than other strategies. The test-and-treat strategy adopted in Marseille also seems capable of shortening the duration of the outbreak when compared to data from France overall by identifying infected people and reducing their viral shedding duration.

In fact, more people were tested in Marseille than in most other areas, and the outbreak lasted only 9 weeks. In addition, patients under HCQ-AZ treatment for at least 3 days had a better clinical outcome, based on mortality rates among patients >60 years, less transfer to ICU and shorter length of stay at the hospital, and these patients also had a shorter duration of viral shedding than patients who did not receive this drug combination.

Finally, a global strategy for the management of the COVID-19 outbreak may help to limit both the number of cases and fatalities and guide countries where this pandemic has not yet peaked.

We confirm here that COVID-19 has several evolutionary stages (Fig. 4). After the incubation period, the first clinical stage, including LRTI and URTI symptoms, is associated with a high viral load and the occurrence of early lung lesions on LDCT, for which it is reasonable to use a compound with antiviral activity. HCQ-AZ has demonstrated its effectiveness in reducing viral shedding [6] and preventing disease progression and death particularly when prescribed at early stages [10,27,28]. Other antiviral compounds, including remdesivir and hyperimmune gamma globulins [29], may have antiviral activity at an early stage of the disease, although there is to date no convincing published report, comparable to that of oseltamivir at the early stage of influenza [30]. Taking into account the association between low blood zinc levels and poor clinical outcomes, zinc supplementation should be also considered, as recently reported [31]. However, the choice of the best treatment should be made according to its safety profile, which is much better for HCQ-AZ than for remdesivir (adverse events leading to cessation of treatment in 0.3% in our study vs. 12% for remdesivir [12]). Nevertheless, we were surprised by the large discrepancy on efficacy and toxicity of HCQ in recent studies compared to ours [32]. As a matter of fact, all patients reported here have been followed by the physicians authors named in our study. Altogether, we found only 0.67% of QTc prolongations and no death related to treatment. In our opinion, this excellent safety profile of HCQ-AZ in our real-life medical experience much better reflects the reality than registry studies such as those recently retracted from high profile medical journals [9].

The second stage includes both an immune reaction and the persistence of the virus [1]. At this stage, extreme caution should be required for patients with risk factors (particularly hypertension), severe clinical presentation (NEWS CoV ≥ 5), intermediate-to-severe lesions in LDCT and biological parameters such as lymphocytopenia, eosinopenia or D-dimers higher than 0.5 μg/L. Systemic coagulation activation and thrombotic complications were probably overlooked in COVID-19 patients. In our study, the youngest person who died was 60 years old, and the death was associated with generalized thrombosis. A recent study reported that among 198 hospitalized COVID-19 patients, 39 (20%) were diagnosed with venous thromboembolism (VTE), and of these patients 25 (13%) had symptomatic VTE, despite routine thrombosis prophylaxis [33]. The third stage consists of an inflammatory stage linked to pro-inflammatory cytokine release with a high risk of transfer to ICU [34]. Moreover, the strong specific antibody response observed at this stage questions the use of hyperimmune gamma globulins [29]. The fourth stage with acute respiratory distress syndrome (ARDS) is characterised by pulmonary tissue injury and requires supportive intensive care. To date, no drug has proven effective at this stage. While most surviving patients may be definitely cured, an unknown proportion may evolve towards pulmonary fibrosis constituting the late stage of the disease, as described by Chinese physicians caring for COVID-19 patients and as previously described for severe acute respiratory syndrome (SARS) in 2003 [35]. Long-term follow-up aiming to screen for fibrosis will be the next challenge in the management of COVID-19. Our experience and suggestions regarding the various stages of COVID-19 are summarized in Fig. 4.

Lest anyone think this appreciation of HCQ+AZ is limited to France, see these reports, among others: