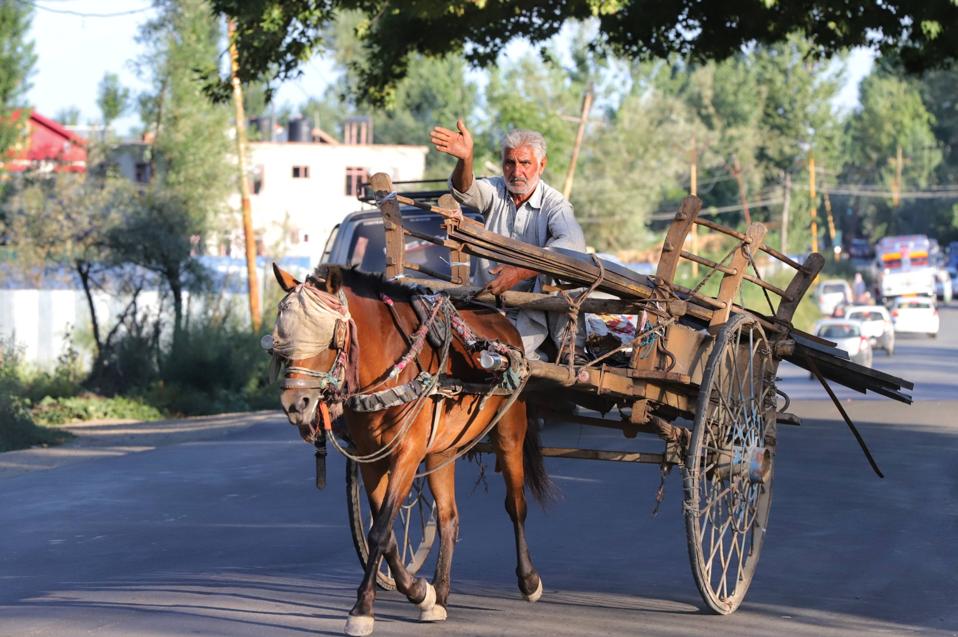 Your next car? NURPHOTO VIA GETTY IMAGES

Amid stubbornly low prices and lackluster demand we’re now seeing, on cue, a new round of predictions that oil demand has already or is about to peak (including even scenarios published by BP). These cannot be dismissed out of hand — as the peak oil supply arguments could, inasmuch as they were either based on bad math or represented assumptions that the industry couldn’t continue overcoming its age-old problems like depletion. (See my book The Peak Oil Scare if you want the full treatment.)

Now, the news is highlighting various predictions that the pandemic will accelerate the point at which global oil demand peaks, which is certainly much more sexy than business as usual. When groups like Greenpeace or the Sierra Club predict or advocate for peak oil demand, it doesn’t make much news: dog bites man. But, as the newspeople say, when man bites dog it is news. Thus, when oil company execs seem to believe peak oil demand is near, you get headlines like, “BP Says the Era of Oil Demand-Growth is Over,” The Guardian newspaper proclaiming that “Even the Oil Giants Can Now Foresee the End of the Oil Age,” and Reuters in July: “End game for oil? OPEC prepares for an age of dwindling demand.”

Anyone who is familiar with the oil industry knows that a peak in oil production has been predicted many times throughout the decades, never to come true (or deter future predictions of same). But few realize that the end of the industry has been repeatedly predicted as well, including both the demise of an old-fashioned business model, but also replacement of petroleum by newer, better technologies or fuels.

Until the 1970s, few saw an end to the oil business. The automobile boom created a seemingly insatiable demand for oil, one which has only slowed when prices rose and/or economic growth stalled, neither of which has ever proved permanent.

Yet there have been three particular apocalyptic threads put forward for the oil industry: the industry would spiral into decline, demand would peak, and/or a new fuel or technology would displace petroleum.

The oil industry’s business model was challenged as far back as 1977, when Mobil XOM +1.3% CEO Rawleigh Warner tried to diversify out of the oil business for fear that those who didn’t would “go the way of the buggy-whip makers.” Similarly, Mike Bowlin, ARCO’s CEO, declared in 1999 “We’ve embarked on the beginning of the last days of oil.” Enron’s Jeff Skilling (whatever happened to him?) said he “had little use for anything that smacked of a traditional energy company — calling companies like Exxon Mobil ‘dinosaurs’”

Vanishing demand has been another common motif for prognosticators, especially when high prices caused demand to slump. Exxon CEO Rex Tillerson (whatever happened to him?) thought in 2009, when gasoline prices were $4/gallon, that gasoline demand had peaked in 2007. (The figure below shows how that worked out.) 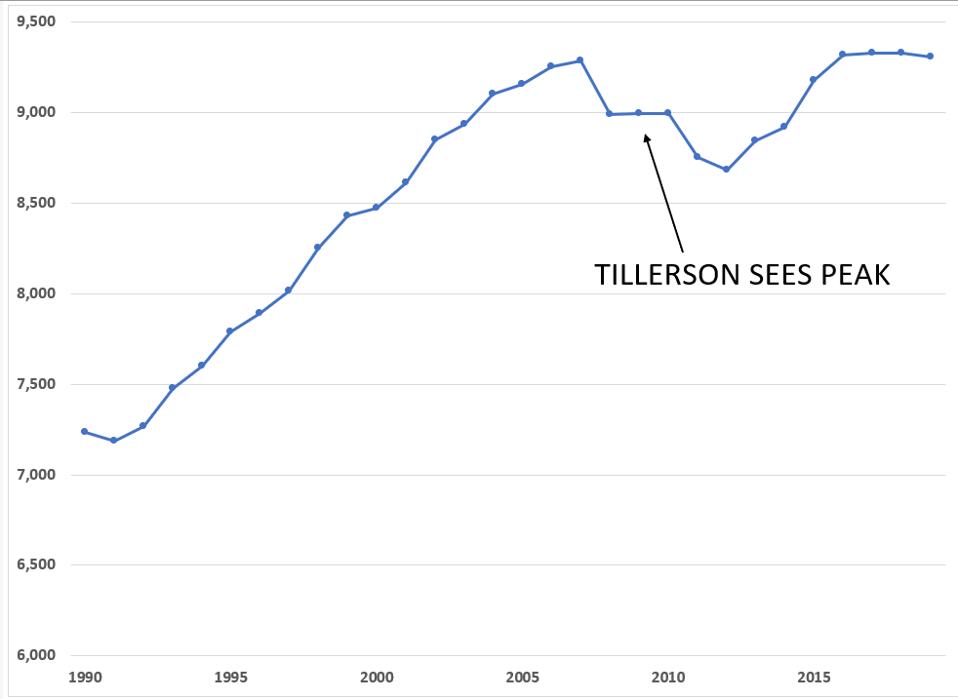 Sheikh Yamani, the former Saudi Oil Minister, warned in 2000 that in thirty years there would be “no buyers” for oil, because fuel cell technology would be commercial by the end of that decade. (From 2000, oil demand increased by 20 mb/d before the pandemic.) The fabled Economist magazine agreed with Yamani in 2003, “Finally, advances in technology are beginning to offer a way for economies, especially those of the developed world, to diversify their supplies of energy and reduce their demand for petroleum…Hydrogen fuel cells and other ways of storing and distributing energy are no longer a distant dream but a foreseeable reality.”

They might have been echoing William Ford, CEO of Ford Motor Company F +0.6%, who said in 2000, “Fuel cells could be the predominant automotive power source in 25 years.” Twenty years later, they are insignificant.

Amory Lovins, whose has probably received more awards than Tom Hanks, has long argued that extremely efficient (and expensive) cars would reduce gasoline demand substantially, including in his (and co-authors) Winning the Oil Endgame, which argued that a combination of efficiency and celluslosic ethanol could replace our imports from the Persian Gulf (then about 2.5 mb/d). (They’ve been replaced, but by shale oil, and demand was unchanged since their prediction.)

He was hardly alone, with Richard Lugar and James Woolsey in a 1999 Foreign Affairs article calling cellulosic ethanol “The New Petroleum.” Perhaps they relied on a 1996 Atlantic article by Charles Curtis and Joseph Room (“Mideast Oil Forever”) which argued that cellulosic ethanol should see its cost fall to about $1/gallon (adjusted for inflation). (In 2017, the National Renewable Energy Laboratory put the cost at $5/gallon.)

One of my persistent themes has been that too much writing is not based on rigorous analysis but superficial ideas, a few anecdotes and footnotes, supposedly supporting Herculean changes.

(See Tom Nichols The Death of Expertise.) Peak oil demand is the flavor of the month and people are rushing to publish predictions, prescriptions, guidelines, and fantastical views of a fantastical future. But petroleum remains by far the fuel of choice in transportation and the pandemic seems unlikely to change that. Sexy should be left for HBO and not energy analysis.

There are many reasons the demand for fossil fuels is strong and growing.

Footnote:  Shareholder activism against Big Oil is based on a cascade of unlikely suppositions including declining demand and stranded assets.  See: Behind the Alarmist Scene