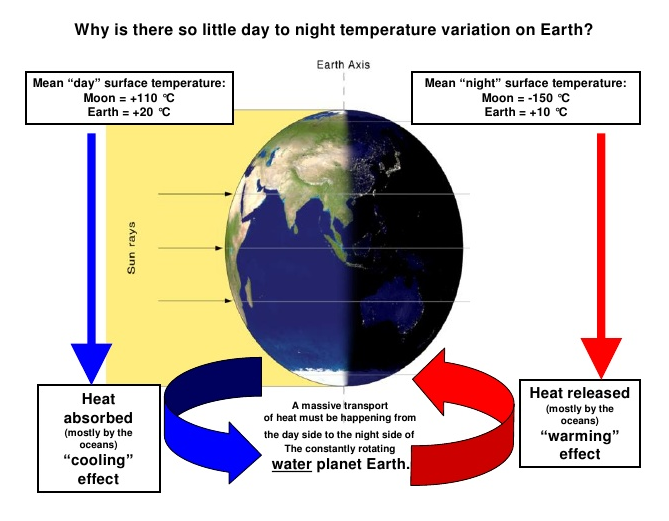 A previous post elaborated a rigorous equation from Christos Vournas for calculating surface temperatures of planets or moons, for comparison with NASA satellite measurements of such bodies in our solar system.  That post is How to Calculate Planetary Temperatures.

The image above presents the huge disparity in day and night temperatures between Earth and its Moon, and notes the role of ocean heat transport.  But as I have learned from Christos, there is much more to the story, and this post discusses these deeper implications.  He adds the rotational factor and its impact upon the radiation emitted by both bodies, ie. Earthshine and Moonshine (though obviously it is not simply visible light).  Excerpts from Vournas are in italics with my bolds.

Moon is in our immediate neighborhood

Moon is in our immediate neighborhood. So Moon is at the same distance from the sun, as Earth, R=1 AU (astronomical unit).  The year average solar irradiation intensity on the top of atmosphere for Moon and Earth is the same

We say “on the top of the atmosphere”, it means the solar intensity which reaches a celestial body and then falls on it. For certain then, during these 14.75 earth days long lunar day the Moon’s surface gets warmed at much higher temperatures than the Earth.

There is the Planet Surface Rotational Warming Phenomenon

Thus the planet S emits more intensively from the sunlit side than the planet F.  There is more energy left for the planet F to accumulate then.  That is what makes the faster rotating planet F on the average a warmer planet.

That is how the Planet Surface Rotational Warming Phenomenon occurs.

And it becomes very cold on the Moon at night

Moon gets baked hard during its 14,75 earth days long lunar day.  And Moon also emits hard from its very hot daytime surface.  What else can the very hot surface do but to emit hard, according to the Stefan-Boltzmann emission Law.  The very hot surface emits in fourth power of its very high absolute temperature.

A warm object in space loses heat via emission. The hotter is the object, the faster it loses heat.  So there is not much energy left to emit during the 14.75 earth days long lunar night.

The Table below shows the implications:

The closest to the sun planet Mercury receives 15.47 times stronger solar irradiation intensity than the planet Mars does.  However on the Mercury’s dark side Tmin.mercury = 100 K, when on the Mars’ dark side Tmin.mars = 130 K.

These are observations, these are from satellites the planets’ temperatures measurements.  And they cannot be explained otherwise but by the planet Mars’ 171.5 times faster rotation than planet Mercury’s spin.

Earth-Moon temperatures comparison -why the differences

But something else very interesting happens.

There is always a balance.  The energy in = the energy out

But again something else very interesting happens.

So the average Earth’s surface temperature is warmer (compared to the Moon). Thus Earth’s Tmean.earth = 288 K and Moon’s Tmean.moon = 220 K

Earth emits IR radiation at lower temperatures during the daytime and at higher temperatures at night-time. Because of the nonlinearity of this process according to the Stefan-Boltzmann emission law, Earth ends up to have on average warmer surface than Moon.

To illustrate the above conclusions I’ll try to demonstrate on the Earth-Moon temperatures comparison rough example:

So we shall have for the faster rotating Earth, compared to the Moon:

The faster a planet rotates (n2>n1) the higher is the planet’s average (mean) temperature T↑mean.

This rough example nevertheless illustrates that for the faster rotating and covered with water (higher cp) Earth compared with Moon the average temperature should be higher.

The planet’s faster rotation and the planet’s higher specific heat capacity “cp” not only smooths, but also processes ( Δmin > Δmax ), the same incoming solar heat, but in a different emission pattern.

We had to answer these two questions:

It is proven now by the Planet’s Mean Surface Temperature Equation calculations. There aren’t any atmospheric factors in the Equation. Nevertheless the Equation produces very reasonable results:

Tmean.moon = 223,35 K, calculated by the Equation, which is almost identical with the Tsat.mean.moon = 220 K, measured by satellites.

2. What causes the Global Warming then?

The Global Warming is happening due to the orbital forcing.

Does the Earth’s atmosphere act as a blanket that warms Earth’s surface?