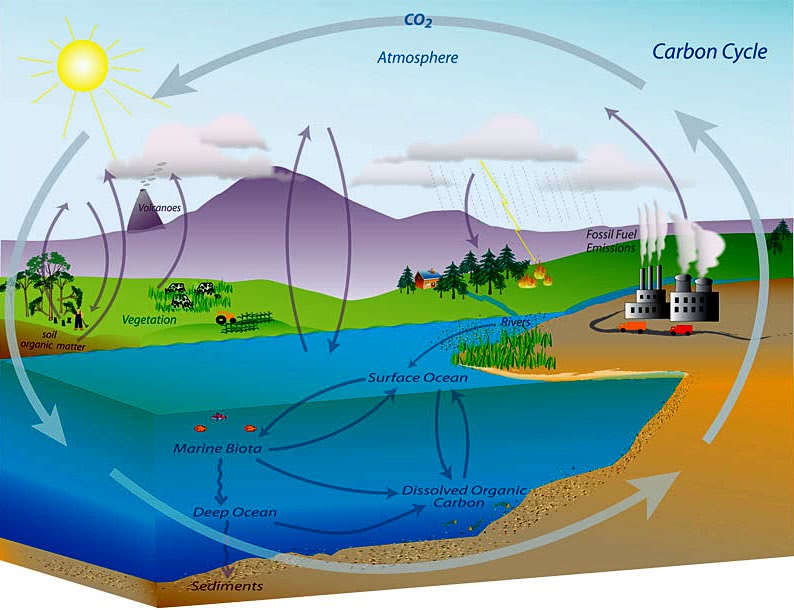 The analysis employs ratios of carbon isotopes to calculate the relative proportions of atmospheric CO2 from natural sources and from fossil fuel emissions. The results are welcomed by skeptics and repulsed by warmists. Excerpts in italics with my bolds.

The specific activity of 14C in the atmosphere gets reduced by a dilution effect when fossil CO2, which is devoid of 14C, enters the atmosphere. We have used the results of this effect to quantify the two components: the anthropogenic fossil component and the non-fossil component.  All results covering the period from 1750 through 2018 are listed in a table and plotted in figures.

These results negate claims that the increase in total atmospheric CO2 concentration C(t) since 1800 has been dominated by the increase of the anthropogenic fossil component. We determined that in 2018, atmospheric anthropogenic fossil CO2 represented 23% of the total emissions since 1750 with the remaining 77% in the exchange reservoirs. Our results show that the percentage of the total CO2 due to the use of fossil fuels from 1750 to 2018 increased from 0% in 1750 to 12% in 2018, much too low to be the cause of global warming.

Readers will find in the the linked paper a complete description of the assumptions, definitions, data sources and equations leading to the above findings.  This post attempts to explain the logic of the analysis for a general audience, with excerpts in italics with my bolds.

Carbon-14 is a radioactive isotope of carbon having a half-life of 5,730 y. Carbon-14 atoms are produced in the atmosphere by interactions of cosmic rays, and they have reached an essentially constant steady state activity, i.e., disintegration rate, in the total world environment (Eisenbud and Gesell 1997). The age of fossil fuels is much longer than the 5,730 y half-life of the 14C radioactive isotope; consequently, fossil fuels are devoid of the 14C isotope. The units used in this paper are disintegrations per minute per gram of carbon abbreviated as dpm (gC)−1, the common units used in 14C dating.

A Wikipedia link for14C describes the increase in the concentration of 14CO2 in the atmosphere that resulted from high altitude nuclear bomb tests, circa 1955–1963. Based on the figure in the Wikipedia link, 14CO2 from the atmospheric bomb tests during this period would be significant in 1955 to about 2005. For the purpose of estimating the anthropogenic fossil and non-fossil components of CO2, measurements of 14C specific activities of atmospheric CO2 during this period should be corrected for the contribution from bomb tests. Outside of this period, no correction would be required.

(2) the production rate of 14C atoms in the atmosphere has been essentially constant for at least 15,000 years (Eisenbud 1997).

Therefore, 77% of the total anthropogenic fossil emissions of CO2 then would be present in the atmosphere’s exchange reservoirs in 2018. These results differ significantly from those reported by others:

The assumption that the increase in CO2 since 1800 is dominated by or equal to the increase in the anthropogenic component is not settled science. Unsupported conclusions of the dominance of the anthropogenic fossil component of CO2 and concerns of its effect on climate change and global warming have severe potential societal implications that press the need for very costly remedial actions that may be misdirected, presently unnecessary, and ineffective in curbing global warming.

Footnote On Elements and Isodopes

The study above, along with the foibles of the current US administration, reminds me of this announcement of a newly discovered element.

The new element is Governmentium (Gv). It has one neutron, 25 assistant neutrons, 88 deputy neutrons and 198 assistant deputy neutrons, giving it an atomic mass of 312, the heaviest of all.  These 312 particles are held together by forces called morons, which are surrounded by vast quantities of lefton-like particles called peons.

Since Governmentium has no electrons or protons, it is inert. However, it can be detected, because it impedes every reaction with which it comes into contact. A tiny amount of Governmentium can cause a reaction normally taking less than a second to take from four days to four years to complete.

Governmentium has a normal half-life of 3-6 years. It does not decay but instead undergoes a reorganization in which a portion of the assistant neutrons and deputy neutrons exchange places.  In fact, Governmentium’s mass will actually increase over time, since each reorganization will cause more morons to become neutrons, forming isodopes.

This characteristic of moron promotion leads some scientists to believe that Governmentium is formed whenever morons reach a critical concentration. This hypothetical quantity is referred to as critical morass.

When catalyzed with money, Governmentium becomes Administratium, an element that radiates just as much energy as Governmentium since it has half as many peons but twice as many morons. All of the money is consumed in the exchange, and no other byproducts are produced. It tends to concentrate at certain points such as government agencies, large corporations, and universities. Usually it can be found in the newest, best appointed, and best maintained buildings.

Scientists point out that administratium is known to be toxic at any level of concentration and can easily destroy any productive reaction where it is allowed to accumulate. Attempts are being made to determine how administratium can be controlled to prevent irreversible damage, but results to date are not promising.