Anthony B. Kim and Patrick Tyrrell write at Daily Signal Economic Freedom Is the Path to Healthy Environments, Social Progress, and Good Governance—Not Woke Corporatism.  Excerpts in italics with my bolds.

The left is trying to refashion how policy makers and private-sector leaders understand their roles by insisting that their actions must have an “environmental, social, and governance” focus. This agenda is frequently abbreviated to “ESG”—a buzzword that is now being heavily circulated online and in D.C. It’s also completely misguided.

The environmental, social, and governance agenda insists that policy makers and private-sector leaders see themselves as the stewards of a newly “woke” planet. In actuality, it is a way to force companies to take positions in the political arena on issues that may have nothing to do with the company’s actual business activities.

Economic freedom, not the environmental, social, and governance agenda, makes the world cleaner, safer, and better governed. It is not hard to find the economic damage that is inflicted by heavy-handed and misguided government policies, which result in lingering uncertainty, deteriorating entrepreneurial environments, and lower employment growth.

The true path to ensuring environmental, social, governance improvements lies in focusing on policies that enhance economic freedom. As documented in The Heritage Foundation’s annual Index of Economic Freedom, the linkage between economic freedom, individual liberty, and prosperity around the world is unambiguous.

This prosperity is not just an end in itself. As the index catalogues, preserving and advancing economic freedom enables individuals, entrepreneurs, and companies to better care for the poor and their environments, create better health care and education systems, ensure an abundance of food and clean water, and solve many of the other societal problems that makes life better for a greater number people. 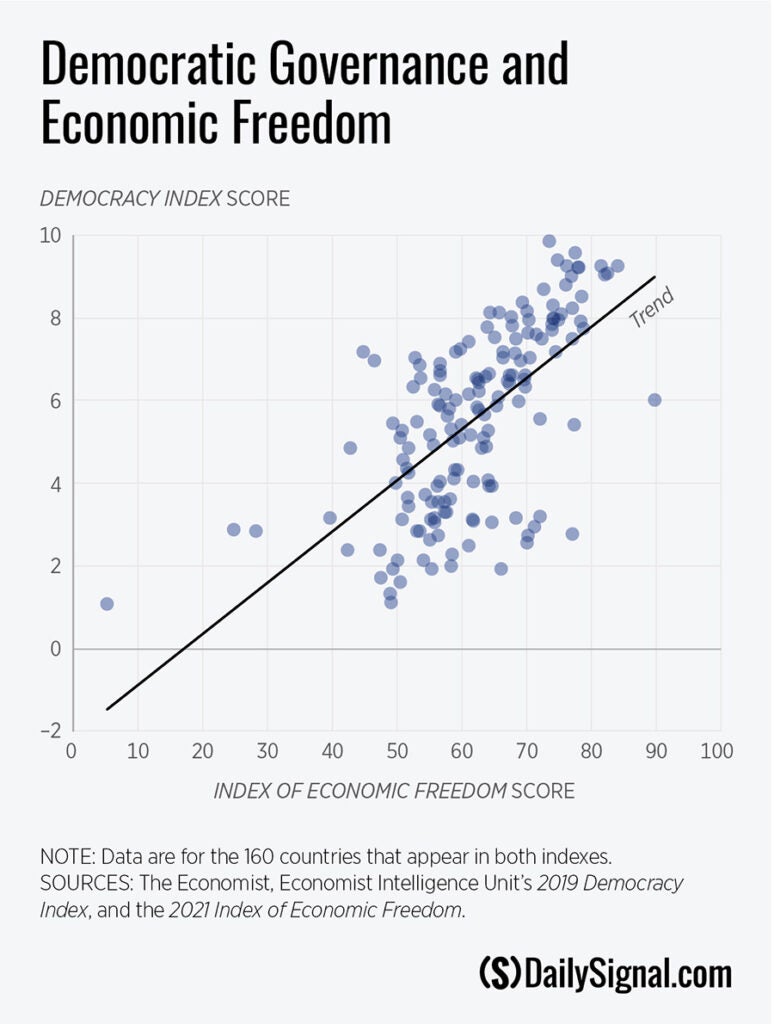 Equally notable is that countries that provide an environment that is conducive to social progress also largely embrace economic freedom. Countries that allow private-sector competitiveness to thrive free from government interference and open their societies to new ideas, products, and innovations have largely achieved the high levels of social progress that their citizens demand.

It is not massive redistributions of wealth or government dictates on income level that produce the most positive social outcomes. 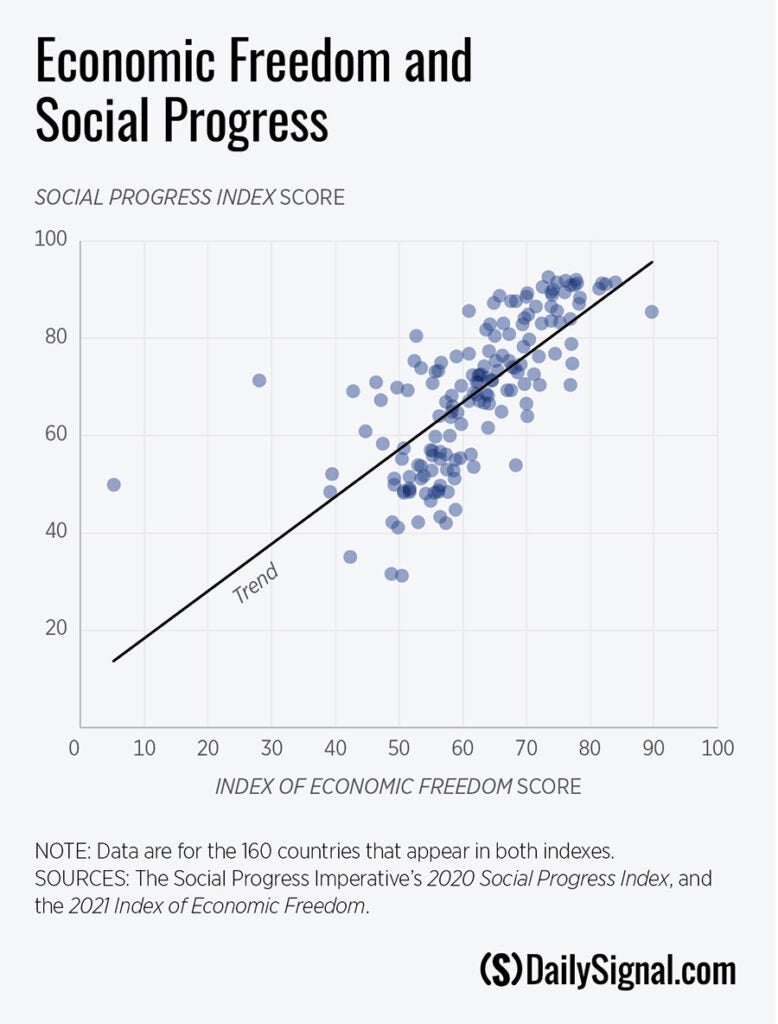 By empowering people to exercise greater control of their daily lives, economic freedom ultimately nurtures political reform by making it possible for individuals to gain the economic resources that they can use to challenge entrenched interests or compete for political power, thereby encouraging the creation of more pluralistic societies. 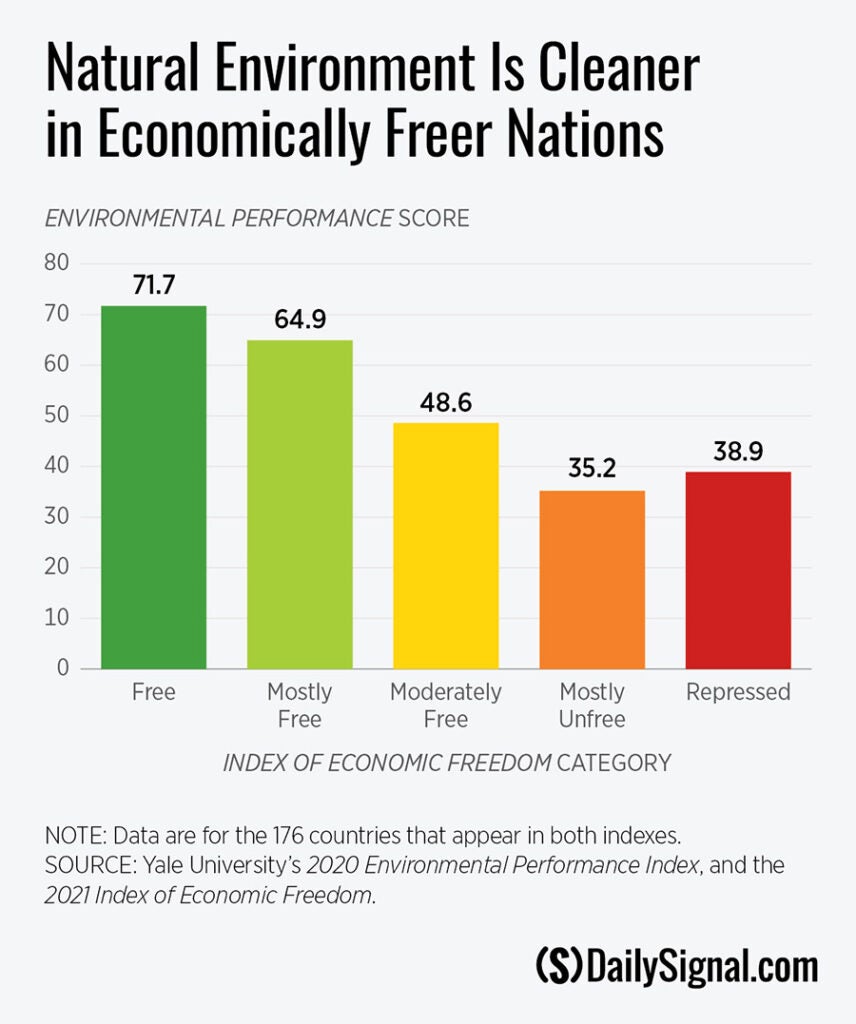 By building on what works, we can accelerate our progress in the face of even the most difficult challenges and chart ever greater success. The key to that is to advance the four pillars of economic freedom—the rule of law, limited government, efficient regulation, and market openness.

Real-world trends already reveal how to advance environmental, social, and responsible governance principles and results. Twenty-seven years of the annual Index of Economic Freedom provide compelling evidence that the pathway to such improvements is not with infringing on people’s economic freedom, but through allowing their economic freedom to flourish.

That responsibility is to advance free people and free markets.