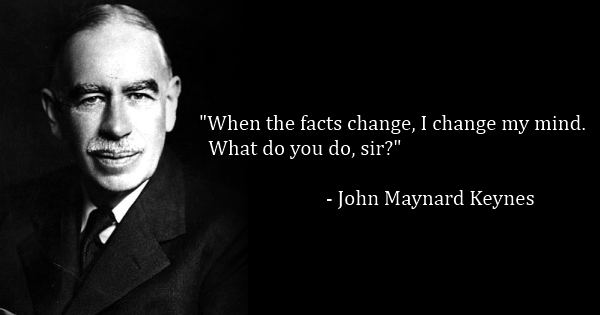 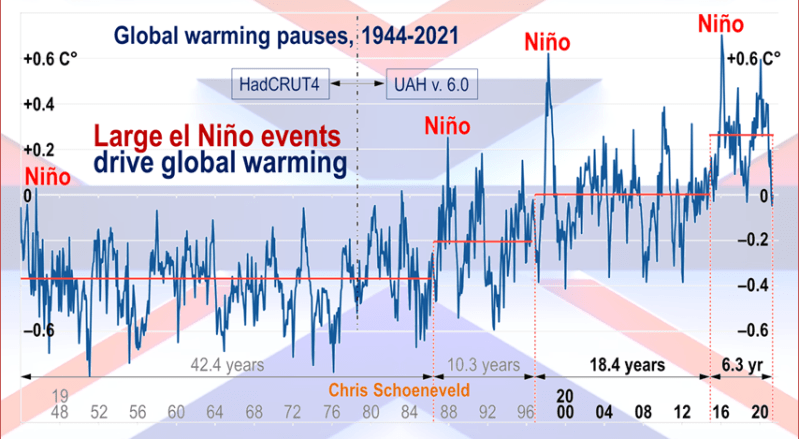 With apologies to Paul Revere, this post is on the lookout for cooler weather with an eye on both the Land and the Sea.  While you will hear a lot about 2020-21 temperatures matching 2016 as the highest ever, that spin ignores how fast is the cooling setting in.  The UAH data analyzed below shows that warming from the last El Nino is now fully dissipated with chilly temperatures setting in all regions.  Last month both land and ocean cooled further.

UAH has updated their tlt (temperatures in lower troposphere) dataset for January 2022.  Previously I have done posts on their reading of ocean air temps as a prelude to updated records from HadSST3 (still not updated from October). So I have separately posted on SSTs using HadSST4 2021 Ends with Cooler Ocean Temps  This month also has a separate graph of land air temps because the comparisons and contrasts are interesting as we contemplate possible cooling in coming months and years. Sometimes air temps over land diverge from ocean air changes, and last month showed air over land dropping slightly while ocean air rose.

After a change in priorities, updates to HadSST4 now appear more promptly.  For comparison we can also look at lower troposphere temperatures (TLT) from UAHv6 which are now posted for January.  The temperature record is derived from microwave sounding units (MSU) on board satellites like the one pictured above. Recently there was a change in UAH processing of satellite drift corrections, including dropping one platform which can no longer be corrected. The graphs below are taken from the new and current dataset.

Note 2020 was warmed mainly by a spike in February in all regions, and secondarily by an October spike in NH alone. In 2021, SH and the Tropics both pulled the Global anomaly down to a new low in April. Then SH and Tropics upward spikes, along with NH warming brought Global temps to a peak in October.  That warmth was gone as November 2021 ocean temps plummeted everywhere. Note the sharp drop in the Tropics the last 3 months, and NH erasing its upward bump in December. 01/2022 closely resembles 01/2015.

Here we have fresh evidence of the greater volatility of the Land temperatures, along with extraordinary departures by SH land.  Land temps are dominated by NH with a 2020 spike in February, followed by cooling down to July and a second spike in November.  Note the mid-year spikes in SH winter months.  In December 2020 all of that was wiped out. Then 2021 followed a similar pattern with NH spiking in January, then dropping before rising in the summer to peak in October 2021. As with the ocean air temps, all that was erased in November with a sharp cooling everywhere. Land temps dropped sharply the last three months, even more than did the Oceans.  Note 01/2022 Global and NH land are much cooler than 01/2015. 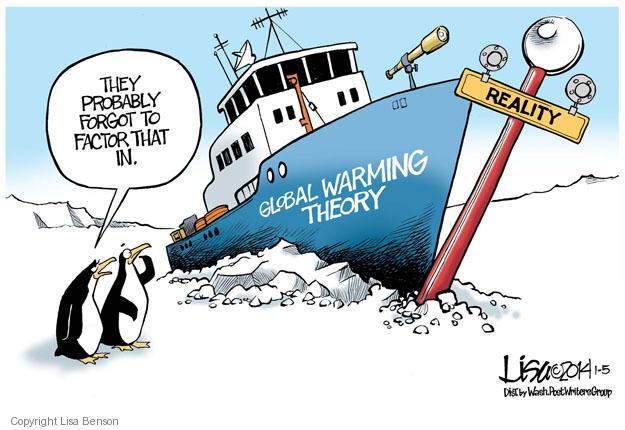 The Bigger Picture UAH Global Since 1995

The chart shows monthly anomalies starting 01/1995 to present.  The average anomaly is 0.04, since this period is the same as the new baseline, lacking only the first 4 years. 1995 was chosen as an ENSO neutral year.  The graph shows the 1998 El Nino after which the mean resumed, and again after the smaller 2010 event. The 2016 El Nino matched 1998 peak and in addition NH after effects lasted longer, followed by the NH warming 2019-20.   A small upward bump in 2021 has been reversed with temps now returning again to the mean.