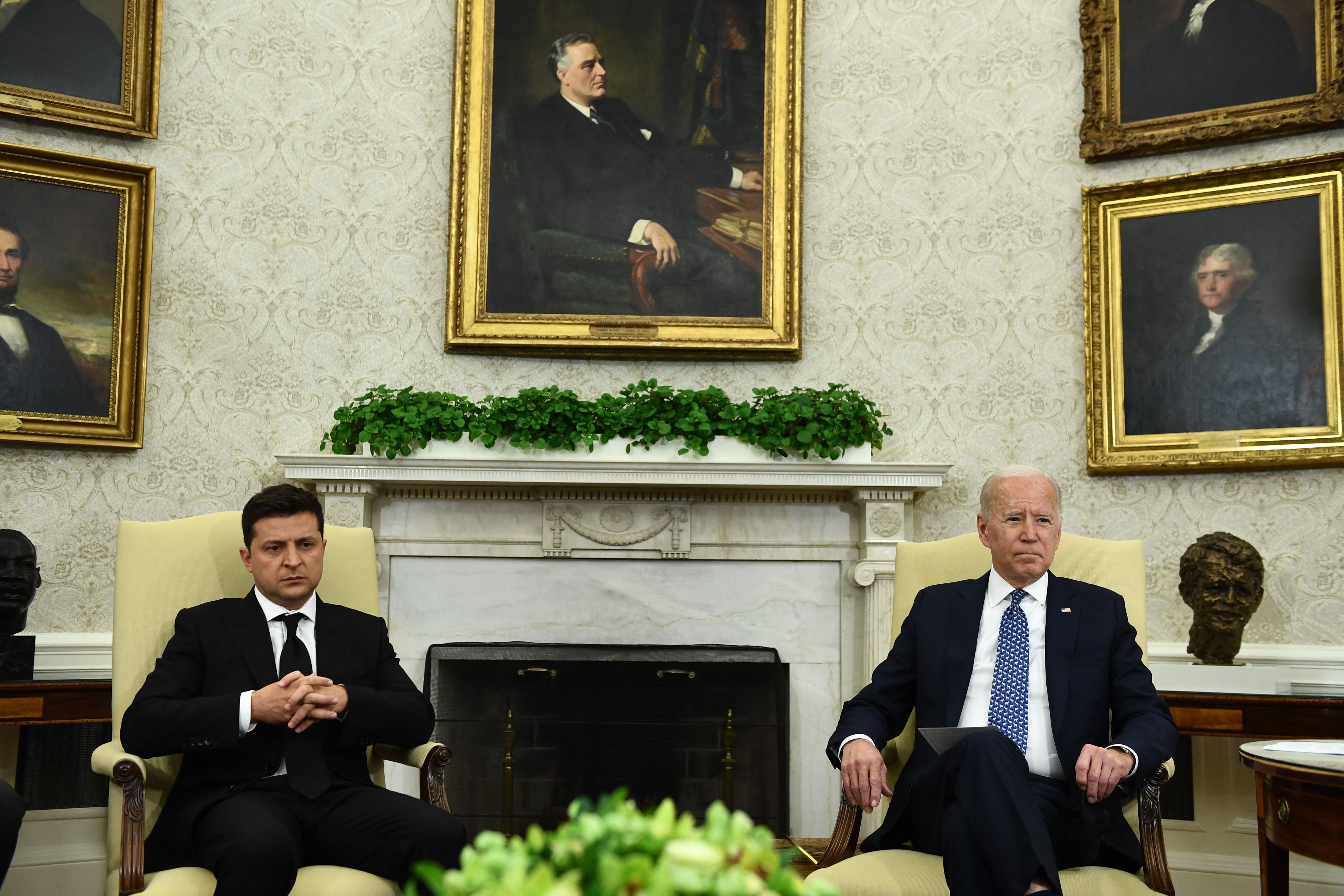 Presently Ukraine reality is lost in the fog of war.   Nothing we read or hear can be trusted, especially since the US media, in particular, scrambles to cover the derrieres of several VIPs.  The best analysis I’ve seen comes from Lee Smith writing at the Tablet Ukraine’s Deadly Gamble.  Excerpts in italic with my bolds.

By tying itself to a reckless and dangerous America, the Ukrainians made a blunder that client states will study for years to come

Russian President Vladimir Putin chose this war, Joe Biden said in his Thursday afternoon speech to America regarding the conflict in Ukraine. That is true, but U.S. elites also had something to do with Putin’s ugly and destructive choice—a role that Democrats and Republicans are eager to paper over with noble-sounding rhetoric about the bravery of Ukraine’s badly outgunned military.

Yes, the Ukrainian soldiers standing up to Putin are very brave, but it was Americans that put them in harm’s way by using their country as a weapon, first against Russia and then against each other, with little consideration for the Ukrainian people who are now paying the price for America’s folly.

Yes, Putin wants to prevent NATO from expanding to Russia’s border. But the larger answer is that he finds the U.S. government’s relationship with Ukraine genuinely threatening. That’s because for nearly two decades, the U.S. national security establishment under both Democratic and Republican administrations has used Ukraine as an instrument to destabilize Russia, and specifically to target Putin.

That Ukraine has allowed itself to be used as a pawn against a powerful neighbor is in part the fault of Kyiv’s reckless and corrupt political class. But Ukraine is not a superpower that owes allies and client-states judicious leadership—that’s the role of the United States. And in that role, the United States has failed Ukraine. More broadly, the use of Ukraine as a goad against enemies domestic and foreign has recklessly damaged the failing yet necessary European security architecture that America spent 75 years building and maintaining.

Ukraine is situated between two greater powers, Russia and the European Union. That makes Ukraine a buffer state. Geopolitical logic dictates that buffer states cultivate and maintain cordial relations with the greater powers that surround them, unless they want to be swallowed up by one of those powers. That’s because siding with one great power against another often leads to catastrophe.

So how did Israel transcend buffer-state status? Because it acquired what is reportedly a large nuclear arsenal with air, land, and sea delivery capabilities—the vaunted nuclear triad—which render it immune to an enemy’s first strike, and ensures, for the time being anyway, that Israel is no longer a stomping ground for empires. Conversely, Ukraine gave up its nuclear arsenal in 1994 in exchange for U.S. security guarantees in the event its neighbors, Russia in particular, turned hostile.

Why can’t the American security establishment shoulder responsibility for its role in the tragedy unfolding in Ukraine? Because to discuss American responsibility openly would mean exposing the national security establishment’s role in two separate, destructive coups: the first, in 2014, targeting the government of Ukraine, and the second, starting two years later, the government of the United States.

Coup #1 Against Ukraine Itself

What kind of strategy dictates that a state hand over its security vis-a-vis local actors to a country half the world away? No strategy at all. Ukraine was not able to transcend its natural geography as a buffer state—and worse, a buffer state that failed to take its own existence seriously, which meant that it would continue to make disastrously bad bets. In 2013, the European Union offered Kyiv a trade deal, which many misunderstood as a likely prelude to EU membership. Young Ukrainians very much want to join the EU, because they want access to Europe so they can flee Ukraine, which remains one of the poorest countries on the continent.

When Yanukovych duly reneged on the EU deal, the Obama administration helped organize street demonstrations for what became history’s most tech-savvy and PR-driven regime change operation, marketed to the global public variously as Maidan, EuroMaidan, the Revolution of Dignity, etc. In February 2014, the protests forced Yanukovych into exile in Moscow. Consequently, Nuland and other Obama administration officials worked to assemble a new Ukrainian government friendly to the United States and therefore hostile to Russia.

In late February, the Russians responded to the American soft coup in Ukraine by invading Crimea and eventually annexing it and creating chaos in Eastern Ukraine. The Obama administration declined to arm the Ukrainian government. It was right to avoid conflict with Moscow, though by leaving Kyiv defenseless, it showed that the White House had never fully gamed out all the possible scenarios that might ensue from setting a client state on course for conflict with a great power. Instead, Obama and the Europeans highlighted their deadly miscalculation by imposing sanctions on Moscow for taking advantage of the conditions that Obama and the Europeans had created.

The White House seems to have taken a perverse pride in the death and destruction it helped incite in Eastern Europe. In April 2014, CIA Director John Brennan visited Kyiv, appearing to confirm the agency’s role in the coup. Shortly after came Vice President Biden, who took his own victory lap and counseled the Ukrainians to root out corruption. Naturally, a prominent Ukrainian energy company called Burisma, which was then under investigation for corruption, hired Biden’s son Hunter for protection.

By tying itself to an American administration that had shown itself to be reckless and dangerous, the Ukrainians made a geopolitical blunder that statesmen will study for years to come: A buffer state had staked its future on a distant power that had simply seen it as an instrument to annoy its powerful neighbor with no attachment to any larger strategic concept that it was willing to support. Russia then lopped off half of the Donbas region on its border and subjected Ukraine to a grinding, eight-year-long war, intended in large part to underline Russian capacity and Ukrainian and American impotence.

Ukraine then made a bad situation even worse. When the same people who had left them prey to Putin asked them to take sides in an American domestic political conflict, the Ukrainians enthusiastically signed on—instead of running hard in the opposite direction.

In 2016, the Hillary Clinton campaign came calling on Ukrainian officials and activists to lend some Slavic authenticity to its Russia collusion narrative targeting Donald Trump. Indeed, Russiagate’s central storyline was about Ukraine. Yes, Trump had supposedly been compromised by a sex tape filmed in Moscow, but Putin’s ostensible reason for helping Trump win the presidency was to get him to drop Ukraine-related sanctions. Here was another chance for Ukraine to stick it to Putin, and gain favor with what it imagined would be the winning party in the American election.

With the CIA’s Brennan and a host of senior FBI and DOJ officials pushing Russiagate into the press—and running an illegal espionage campaign against the Trump team—Ukrainian political figures gladly joined in. Key participants included Kyiv’s ambassador to Washington, who wrote a Trump-Russia piece for the U.S. press, and a member of the Ukrainian parliament who allegedly contributed to the dossier. The collusion narrative was also augmented by Ukrainian American operatives, like Alexandra Chalupa, who was tied into the Democratic Party’s NGO complex. The idea that this game might have consequences for Ukraine’s relations with its more powerful neighbor doesn’t seem to have entered the heads of either the feckless Ukrainians or the American political operatives who cynically used them.

And that was only the beginning. Just as Russiagate seemed to be coming to a close in July 2019, U.S. national security officials injected yet another Ukraine-related narrative into the public sphere to target the American president. This one appears to have been initiated by Ukrainian American White House official Alexander Vindman and his colleague Eric Ciaramella, a CIA analyst who had served as Vice President Biden’s point man on Ukraine during the Obama administration. When Vindman told Ciaramella about a phone call in which Trump had asked the Ukrainian president for information regarding allegations about the Biden family’s corrupt activities in Kyiv, they called on help from U.S. intelligence services, the State Department, the Pentagon, Democratic Party officials, and the press. Quick, scramble Team Ukraine—Trump is asking questions!

In order to cover up for what the Bidens and perhaps other senior Obama officials had done in Ukraine, a Democratic Congress impeached Trump for trying to figure out what American policymakers had been doing in Ukraine over the past decade. As for the Ukrainians, they again put themselves in the middle of it, when they should have stayed home.

The end result was that the Ukrainians had helped weaken an American president who, unlike Obama, gave them arms to defend themselves against the Russians. More seriously, they reinforced Putin’s view that, especially in partnership with the Democrats, Ukraine did not understand its true place in the world as a buffer state—and would continue to allow themselves to be used as an instrument by policymakers whose combination of narcissism and fecklessness made them particularly prone to dangerous miscalculations.

The 2020 election victory of Joe Biden, a man whose family had been paid by the Ukrainians to protect them, can have done little to quiet Putin’s sense that Ukraine needed to be put in its place before it was used yet again as a weapon against him.

From the perspective of the U.S. national security establishment, Biden’s victory over Trump signaled that its actions in Ukraine would stay hidden. So long as the media continued to bark that the 45th president of the United States is Putin’s stooge, no one would be held accountable for anything. Except, as it turns out, D.C. political operatives aren’t the only people who can make history. Putin can, too. And the people of Ukraine will come out much the worse for both of their efforts.