The media output currently befits the bard’s description  “full of sound and fury; signifying nothing.”  Resonating with me is an article by Terry Paulding at American Thinker It’s Ukraine gaslighting time!  Excerpts in italics with my bolds and added images.

They’re all scrambling, visibly uncomfortable, all the pundits coming on all the talk shows on cable news, contradicting one another and stepping on one another’s narrative. The hosts have become so used to having a storyline to parrot that they can’t stand it. They’re practically begging to be told the “right” tack to take! But Ukraine/Russia isn’t following a path that anybody predicted.

Biden and his administration are no help at all, given he’s the one who practically invited Russia to come on in, then got upset about it. It’s not clear whether we’re heading into WW3, watching a mild skirmish that will end soon, whether Putin has lost his marbles or is being crafty and smart, or helping “free” some break-away sections of the country. It’s not clear whether Zelensky is an installed puppet (apparently by the WEF) or the brave patriot he’s currently appearing to be, ready to stand and fight for his country.

The various retired U.S. military generals and other “experts” making the talk show rounds aren’t helping. One lays out the scenario that restricting Russia from the SWIFT banking system will break Putin. Another demands we set up a no-fly zone. Yet another says it’s all historical — that the whole thing started before the year 1000, and we just don’t understand. Another says since Ukraine was in bed with Hitler in WW2, it’s still a hotbed of Nazi sentiment, and Putin is just weeding that out at long last.

We’re told that some of the border provinces are “more Russian than Ukrainian.” We see that the populace is arming itself, picking up guns from local police stations, and there may be a guerrilla war to come. We watch in horror as a tank tramples a car, then we learn — maybe — that it was not a deliberate action. We are also told that the Russian soldiers really don’t want to kill civilians, then we see the bombed-out apartment building. We learn that Russia captured an airfield…but maybe the Ukrainians took it back.

Then someone mentions that when asked to give up their nukes years ago, it’s possible Ukraine hid some at Chernobyl. After all, what better place to keep them? Then we learn that Russia took over that site, and now there is a massive upsurge in detected radiation from it. Um…about that — what’s going on?

We don’t know what it all means, but it makes us all profoundly uncomfortable. Do we have sympathy for the underdog Ukrainians, when we also know they have a pretty crooked society (think Hunter Biden and Burisma)? Or do we have a little sympathy for Putin, who, after all, has been a relatively mild autocrat in Russia for many years? Or do we heed the rumors that he’s losing it mentally as Biden is?

Then there’s Biden, who has exhibited so profound a lack of leadership that he even bragged intelligence to the Chinese — who turned around and shared it with Putin. Biden has clearly got no idea of a path forward. First, he agreed to Nord Stream, then he did an about-face. He stripped us of the ability to take care of our own energy needs and has been buying from Russia. Therefore, he’s monetarily supporting Russia in its foray against Ukraine, all the while impoverishing the U.S. — not to mention he appears to want to defend Ukraine’s borders but couldn’t care less about our own.

Am I confused? Heck, yeah. Who wouldn’t be? I long for the clarity of someone like Ric Grenell and the strength and knowledge (yes, knowledge) of how to proceed that I’d get from Donald Trump (we wouldn’t be watching war, of course, if he was in charge).

I long for a country that gets its head out of its nether regions, puts the current administration on administrative leave (without pay), and brings back some sanity. I know that will never happen, sadly.

I can read a hundred different stories online. Can, if I want, attend a passionate rally of Ukrainian-Americans in San Francisco, and yell and scream my protest. I know I can go to RT News and get its propaganda. Really, what’s most interesting there is that the comments aren’t censored at all, unlike here in the repressive USA. Not that there’s any unanimity of opinion there, either, but it does make one think.

In the meantime, the story has conveniently supplanted obsessing over COVID. Too bad it won’t supplant inflation, albeit the escalating price at the gas pump will now be conveniently blamed on this war. That’s one storyline, at least, that the leftist cable stations can all agree to push on us as if it were true. 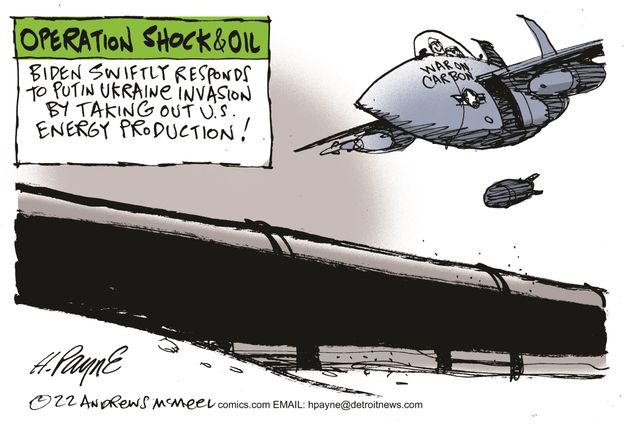 The Crowded Road to Kyiv

Land mines don’t seem to be a factor on the ground in Ukraine, but the media landscape is full of them, planted by legacy broadcasters. Victor Davis Hanson puts up some warning signs in his American Greatness article The Crowded Road to Kyiv  Some examples in italics with my bolds.

One of the oddest commentaries about the Russian invasion of Ukraine is the boilerplate reaction that “borders can’t change in modern Europe” or “this does not happen in the 21st century.”

But why in the world should the 21st century be exempt from the pathologies of the past 20 centuries? Are we smarter than the Romans? More innovative than the Florentines? Do we have more savvy leaders than Lincoln or Churchill? Are they more mellifluous than Demosthenes? Does anyone now remember that some 130,000 were slaughtered just 30 years ago in the former Yugoslavia, as NATO planes bombed Belgrade and nuclear America and Russia almost squared off?

Has globalization, the “rules-based order,” the Davos reset elite, the “international community” so improved the very way humans think that they have rendered obsolete the now ossified ancient idea of deterrence?
Will the Kardashians and Beyoncé tweet our pathway to global peace?

So, to the degree Putin believes in a cost-to-benefit analysis that any envisioned invasion will prove profitable, he will invade anywhere he feels the odds favor his agenda. And when he does not—if America or NATO offers a deterrent, if oil is plentiful and cheap, and if Western leaders are sober and strong rather than loud and weak—he will not so gamble. It’s really that simple. Feed Putin a hand, and he will gobble a torso.

Still, the Russians may, we hope, have a hard time of it in Ukraine—if for no other reason than the country is larger than Iraq in both size and population. It has lots of supply conduits across the borders with four NATO countries that can finally begin pouring in weaponry. An invader that cannot stop resupply from third-party neighbors can rarely subdue its target.

So if in a week Putin cannot shock and awe the elite or decapitate the government, he will have a hard time subduing the population. Time is not on his side. Sanctions are worthless in the short term but eventually they can bite.

Why did Biden blow-up energy independence? Could not tomorrow Biden reverse course, greenlight the Keystone pipeline, reverse his mindless opposition to the EastMed pipeline that would help allies Cyprus, Greece, and Israel to help other allies in southern Europe, and throw open new federal leasing to supply exports of liquid natural gas to Europe?

What is moral, and what amoral: alienating Bernie Sanders and the squad or keeping our allies and ourselves safe from foreign attack? What is so ethical about following the green advice of billionaires like global jet-setter John Kerry at the expense of the middling classes who cannot afford to drive their cars or warm their living rooms?

All this and more have eroded the global fear of the U.S. military. We have all but destroyed American trust in our own armed forces (only 45 percent of the Americans poll great confidence in the military). The woke threat is in addition to spiraling pensions and social justice overhead that make the defense budget lean on actual defense readiness. Enemies did not erode our military’s once feared deterrence, our own top military and civilian leadership did. Time is short, enemies numerous. Can we find any brave soul who will restore the military?

But we also are mired in $30 trillion in debt. We print $2 trillion a year in mockery of inflation. Our major cities are crime-ridden and the streets medieval with the homeless and sidewalk sewers. Race relations are the worst in memory.

We have no southern border. Nearly 50 million residents were not born in our country—and this challenge at a time when we have given up on assimilation and integration. The woke virus has warped racial and ethnic relations and is destroying the idea of meritocracy. We are in the hold of a Jacobin madness, in a top-down elite race to perdition. To praise America’s past is a thought crime. The ignorant, who have no idea of the date when the Civil War began, nonetheless lecture to the nodding that 1619 not 1776 was America’s real foundational date.

So what is NATO? In truth, 25 or so of the 30 nation members are defenseless. They rely on the United States to protect them from enemies in their own backyard. Only the NATO nuclear monopolies of Britain and France offer a deterrent umbrella over both NATO and the EU—on the quiet assurance that a far bigger nuclear American umbrella covers all of them.

We should simply ask those who will meet their promised military commitments to stay, and the others to go quietly in peace and follow the Swiss model. Why are there any U.S. combat troops in Germany? Are they there to protect the Nord Stream 2 pipeline from Russian attack? To reward Germany for spending less than two percent on defense?

For five years Americans were obsessed not just with Putin, but the left-wing myth that Russians were under all our beds—the tattooed, gap-toothed cruddy villains of Hollywood movies, the supposed Satanic colluders of the Steele dossier, the nefarious bankers who stealthily communicated at night with the White House. So we voluntarily gave up the old Russian triangulation card when we once played dictatorial China off against dictatorial Russia. The Kissingerian principle dictated that neither of the two should ever become closer to one another than either is to us. We gave all that up and instead hung on every word for two years of Bob Mueller, James Comey, and the lunatics at CNN.

Meanwhile, China birthed, and hid the origins of, a virus that destroyed the U.S. economy and undermined our entire culture. Thousands of Chinese are here mostly to aid in expropriating U.S. technical expertise. Add in the Uighurs and the now vanquished Tibet, and China outdoes even Putin in its human rights atrocities. If Ukraine falls, Taiwan will be the third nation that the West “lost” during the Biden Administration. 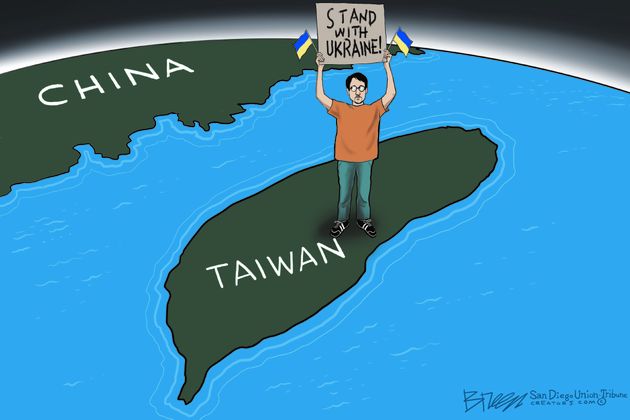