John Solomon writes at Just The News Ballot Bombshells: 20 episodes exposing fraud, illegalities and irregularities in 2020 election.  Excerpts in italics with my bolds.

Illegal rule changes, ballot harvesting, Iranian voter hack are among the many now-confirmed serious irregularities, putting the lie to the “perfect election” narrative.

For more than a year, Democrats and their allies in the corporate media have decried what they call the “Big Lie” that America’s 2020 election was flawed or stolen. But almost weekly now, revelations are emerging that the election was, in fact, marred by illegalities, irregularities and mismanagement like former President Donald Trump has argued, leaving a nation increasingly doubting the reliability of its election system.

A recent poll found that 40% of Americans no longer believe in the legitimacy of the winner of either of the last two presidential elections, a stunning number for a country globally held as the gold standard for constitutional republics built on democracy.

The 2020 election results almost certainly won’t be reversed, no matter how widespread the calls for decertification grow. But the opportunity to take the many failures of the last election seriously to improve Americans’ confidence in voting in the 2022 and 2024 elections looms large, experts told Just the News.

Here are 20 of the most important revelations uncovered by Just the News over the last 15 months of reporting, complete with substantiating evidence and links”

1.A Foreign Intrusion. Federal authorities have confirmed that two Iranian nationals successfully hacked into a state computer election system, stole 100,000 voter registrations and used the data to carry out a cyber-intimidation campaign that targeted GOP members of Congress, Trump campaign officials and Democratic voters in the November 2020 election in one of the largest foreign intrusions in U.S. election history. The defendants “were part of a coordinated conspiracy in which Iranian hackers sought to undermine faith and confidence in the U.S. presidential election,” U.S. Attorney Damian Williams declared in an indictment.

2.  Alleged Bribery. The former state Supreme Court justice appointed by the Wisconsin Legislature to investigate the 2020 election concluded that millions of dollars in donations to election administrators in five Democrat-heavy municipalities from the Mark Zuckerberg-funded Center for Tech and Civic Life violated state anti-bribery laws and corrupted election practices by turning public election authorities into liberal get-out-the-vote activists. “The Zuckerberg-funded CTCL/ Zuckerberg 5 scheme would prove to be an effective way to accomplish the partisan effort to ‘turnout’ their desired voters and it was done with the active support of the very people and the governmental institution (WEC) that were supposed to be guarding the Wisconsin elections administrative process from the partisan activities they facilitated,” Justice Michael Gableman wrote.

3. Illegal ballot harvesting in Wisconsin. Gableman also exposed an extensive vote collection operation, known as ballot harvesting, in nursing homes in which third-party activists illegally collected the ballots of vulnerable residents, some of whom lacked the mental or physical capacity to vote or were forbidden from voting by guardianship agreements. State election regulators “unlawfully directed the municipal clerks not to send out the legally required special voting deputies to nursing homes, resulting in many nursing homes’ registered residents voting at 100% rates and many ineligible residents voting, despite a guardianship order or incapacity,” Gableman wrote in his explosive report.

4.  Ballot harvesting probe in the Peach State. Georgia Secretary of State Brad Raffensperger has announced he has opened a criminal investigation into allegations that liberal activists engaged in illegal ballot harvesting, collecting ballots from voters and delivering them in violation of state law. Raffensperger said he is planning to issue subpoenas to identify a whistleblower who admitted he engaged in the operation, and there could be prosecutions. The True the Vote election integrity group says in a formal state complaint that the man, identified as John Doe, admitted his role and identified nonprofits who funded it at $10 per ballot delivered. The watchdog group also claims it has assembled cell phone location records pinpointing the alleged harvesting by as many as 240 activists.

5.  Bad voter signatures? A review of Maricopa County’s mail-in ballots in Arizona’s 2020 presidential election estimated that more than 200,000 ballots with signatures that did not match voter files were counted without being reviewed, more than eight times the number the county acknowledged.

6.  50,000 Arizona ballots called into question. An extensive audit by Arizona’s Senate officially called into question more than 50,000 ballots cast in the 2020 election, including voters who cast ballots from residences they had left. The tally in question is nearly five times the margin of Joe Biden’s victory in the state. 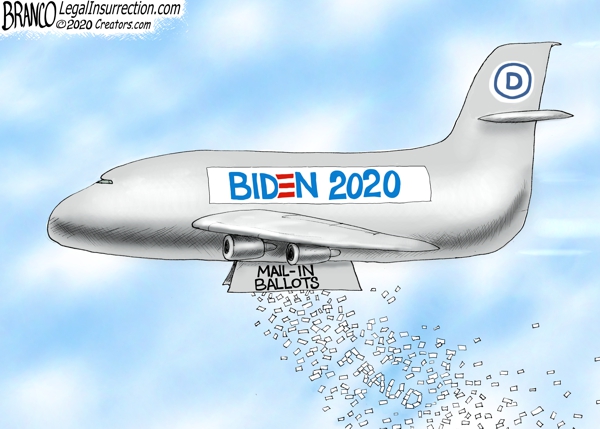 7.  Illegal ballot drop boxes. A Wisconsin judge has ruled the widespread use of ballot drop boxes in 2020 was unlawful, and the state Supreme Court let that ruling stand. That means drop boxes can’t be used in future elections starting in April. It also means that tens of thousands of ballots in the 2020 election were cast unlawfully.

8.  Foreign voters found on Texas rolls. An audit of Texas voter rolls identified nearly 12,000 noncitizens suspected of illegally registering to vote and nearly 600 cases in which ballots may have been cast in the name of a dead resident or by a voter who may also have voted in another state. Officials are now in the process of removing the foreign voters and deciding whether prosecutions are warranted.

9.  Foreign voters found on Georgia rolls. An audit by Georgia’s Secretary of State has identified more than 2,000 suspected foreigners who tried to register to vote in the state, though none reached the point of casting ballots. Raffensperger says prosecutions may be forthcoming.

11. More noncitizen voters. The Gableman investigation in Wisconsin also found noncitizens had made it onto the state voters rolls in violation of state law. The Wisconsin Election Commission failed “to record non-citizens in the WisVote voter database, thereby permitting non-citizens to vote, even though Wisconsin law requires citizenship to vote — all in violation of the Help America Vote Act,” the investigator wrote.

12.  Ballot chain of custody issues. The Georgia Secretary of State’s office has opened an investigation into the handling of drop box ballots last November in one of the state’s Democratic strongholds following a media report that there were problems with chain of custody documentation in DeKalb County.

13.  Fulton County irregularities. Georgia’s handpicked election monitor for Fulton County, the state’s largest voting district, documented two dozen pages of mismanagement and irregularities during vote counting in Atlanta in November 2020, including double-scanning of ballots, insecure transport of ballots and violations of voter privacy. The revelations prompted the state to take steps to possibly put Fulton County in receivership, empowering state officials to run the elections. Most of Fulton County’s election officials have left their jobs.

16. Illegal exemptions from voter ID. The Wisconsin Supreme Court ruled as many as 200,000 voters were allowed to illegally skip voter ID for absentee ballots by claiming they were indefinitely confined by COVID when there was no such legal authority to do so. Biden beat Trump by about 20,000 votes in the state.

18. More illegal harvesting. In Arizona, a half dozen people have already been indicted on charges of illegal harvesting in a probe by Attorney General Mark Brnovich that shows signs of expanding. It comes after the U.S. Supreme Court rejected Democrats’ arguments and concluded Arizona’s ban on harvesting was constitutional.

20. Still more nursing home fraud. In Wisconsin, Racine County Sheriff Christopher Schmaling announced his investigators have secured evidence that eight out of 42 residents at a local nursing home had been recorded as casting absentee ballots that their families said was not possible because the residents didn’t possess the cognitive ability to vote.

By following the linked title to the article, you can read in depth reports on these issues.