The alternative attitude was recently put forth by Obama exercising his free speech rights in front of a Stanford audience who both like him and like what he says.  In effect he said he is all for free speech but tech companies need to censor some speech to protect democracy.  Seems like a semi-pregnant posture.  It reminds me a Rodney Dangerfield scene portraying a business executive: He tells his secretary, “Hold some of my calls!”

Jenin Younes explains the issue and its import in her Brownstone Institute article The Federal Government Forces Social Media Companies to Censor Americans.  Excepts in italics with my bolds and added images.

In May of 2021, the Biden Administration began a public, coordinated campaign to combat the dissemination of “health misinformation” related to Covid, especially across social media platforms.

Members of the Administration, including Surgeon General Vivek Murthy and the President himself, often through White House Press Secretary Jen Psaki, have made clear that they blame Big Tech for American deaths from the virus, and insist that these platforms have an obligation to censor those who articulate views that depart from the Government’s messaging on Covid-related matters.

The Administration has stated that it supports “a robust anti-trust program,” a not-so-subtle warning that if the Twitters and Facebooks of the world do not do the Government’s bidding, they will suffer the consequences.

The campaign has been increasing in intensity for nearly a year.

Ms. Psaki and Dr. Murthy have subsequently stated that the government is flagging problematic posts for social media platforms to censor and commanded them to elevate the voices of those who promote the approved messaging through algorithms while banning those whose perspectives conflict with the government.

The President has affirmed his belief that social media platforms “should be held accountable” for misinformation circulated on them. On March 3, Dr. Murthy announced an initiative, wherein he demanded that tech companies provide the government with “sources of misinformation,” including the identity of specific individuals, by May 2.

Like many others around the world, Michael P. Senger of California, Mark Changizi of Ohio, and Daniel Kotzin of Colorado, operated Twitter accounts that centered around criticizing government and public health Covid restrictions. All three accounts rapidly became popular.

Starting last spring, right around the time the Biden Administration’s efforts became public, the three were subject to temporary suspensions. Mere days after Dr. Murthy’s March 3 statement, Mr. Kotzin was suspended for a week, and Mr. Senger permanently. This means he is never permitted to create another Twitter account. He has lost his 112,000 followers, and in his own words, been “silenced and completely cut off from” the network he developed over two years.

According to Twitter, the suspensions were for spreading Covid “misinformation.” Mr. Senger, Mr. Changizi, and Mr. Kotzin had, in the cited tweets, expressed opposition to vaccine mandates and suggested that the vaccines do not slow the spread of Covid. They also argued that government-imposed restrictions do not work to mitigate viral spread, the risks Covid poses to children are sufficiently low to disfavor vaccination for them given the long-term unknowns, and naturally acquired immunity is superior to that attained through vaccination.

None of these claims is outside the realm of legitimate scientific discourse.

In fact, figures like CDC Director Rochelle Walensky, Anthony Fauci, and President Biden, who a mere six or eight months ago expressed absolute confidence that, for example, the vaccines stop transmission and confer better protection than naturally acquired immunity, have now been confronted with unequivocal evidence that they were wrong.

A meta-study out of Johns Hopkins University concluded that lockdowns did not reduce Covid deaths, while causing quite a bit of harm, corroborating observational data from around the world. Several Scandinavian countries recommend against vaccinating healthy young children based on an objective risk assessment, and study after study has proven that naturally acquired immunity is superior to vaccine-induced immunity.

Following nearly two years of insistence that community masking is effective, many prominent public health officials have changed course. It is a great irony that those who have been so wrong throughout the pandemic now seek to silence dissenters, particularly those who have proven prescient on many topics.

And even if they were expressing flatly incorrect views, the First Amendment gives them the right to voice those opinions. The concept of free speech was embraced by the Framers of the Constitution, who were clearly wiser than many who govern us today. They recognized that censorship does not work practically: rather, it encourages people to operate covertly, often exacerbating the problem, and that the cure to bad speech is good speech.

But most of all, they understood that giving government the authority to determine which ideas should be heard and which should be suppressed is a dangerous game.

Of course, many will argue that Twitter and other tech companies censored Mr. Senger, Mr. Changizi, and Mr. Kotzin of their own volition, and as they are private actors, the First Amendment is inapplicable.

That argument should be rejected. When the government commandeers, coerces, or utilizes private companies to accomplish what it cannot do directly, courts recognize that is state action. In a mid-20th century version of this case, Bantam Books v. Sullivan, the Supreme Court held that a state government commission consigned with reprimanding sellers of pornography and advising them of their legal rights (a veiled threat) “deliberately set about to achieve the suppression of publications deemed ‘objectionable’ and succeeded in its aim.” The Court looked “through forms to the substance” and concluded that this program violated the First Amendment.

That is similar to what is happening here. The Biden Administration knows that it cannot get away with issuing orders directly prohibiting people from articulating views about Covid-related matters that differ from the government’s, or from obtaining users’ private information, so it is coercing companies into doing this on the government’s behalf.

Fearing reprisal from the government—reprisal that the government has publicly contemplated—the companies are ramping up censorship. These companies are also likely to turn over information about users that Dr. Murthy demanded, a violation of the Fourth Amendment’s prohibition against warrantless searches.

Not only are individuals like Mr. Senger being silenced outright. Mr. Changizi, Mr. Kotzin, and millions of others are afraid to say what they really think because they do not want to suffer Mr. Senger’s fate. Courts should “look through forms to the substance” and recognize what is going on. 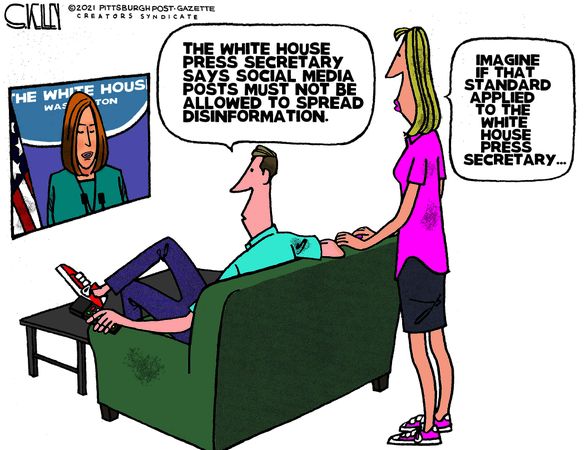